How Indigenous people in Canada are reclaiming lacrosse 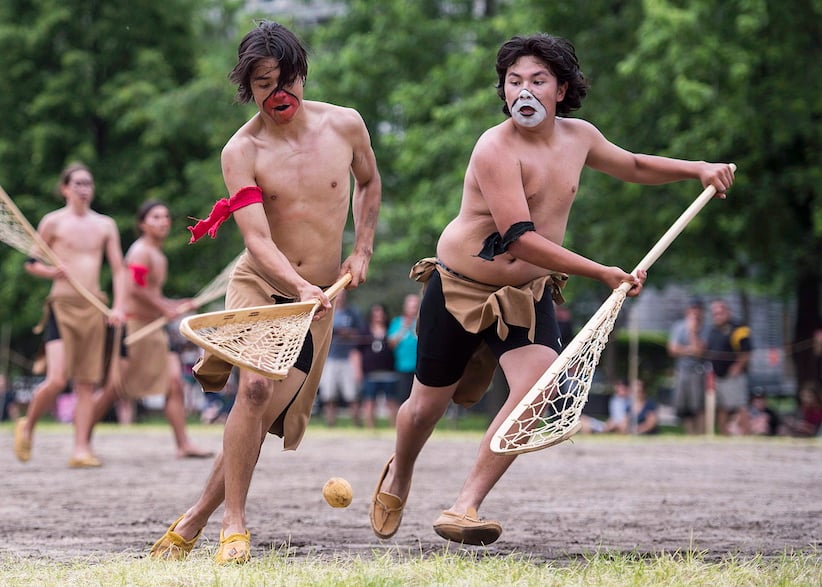 Comyn Jamieson, 3, trains with his lacrosse team every week in the Six Nations of the Grand River reserve in Ontario. In the locker room, he gets dressed in rib guards, shoulder and elbow pads, a helmet and jersey, his legs bare but for his shorts. Comyn and his fellow top-heavy toddlers belong to the Six Nations Warriors junior paperweight squad. “It’s in our blood,” says Comyn’s father, Cody Jamieson, who is a professional player for the Rochester Nighthawks in the National Lacrosse League. “We are, literally, born with sticks in our hands.”

In the 1700s, Mohawk men near present-day Montreal were first to play tewaarathon, a ball-and-net stick game that was given to them by the Creator and taken from them by Canadian settlers. French immigrants renamed it, and an English dentist changed the rules to create a “gentleman’s game,” banning Aboriginal athletes from rosters. Later, lacrosse leagues went Ivy league, and the athletes on Canadian and American teams became predominantly white. But Indigenous communities now see potential for the sport to help prevent depression, obesity and diabetes, and to offer youth a shot at scholarships to college and university. Beginning with the youngest generation, Indigenous athletes are reclaiming Canada’s national sport.

“It’s our game,” says Rusty Doxtdater, Indigenous director of the Canadian Lacrosse Association (CLA). “We’ll let the non-Natives put in any rules they want. Then we’ll just beat them under their rules.” The CLA doesn’t know how many of its players are Indigenous, but next season it will begin asking registrants to self-identify (the association had 82,952 players last year, about one-seventh the number of Canadians who play hockey).

In the Standing Buffalo First Nation in Saskatchewan, residential school survivors have sacrificed their settlement packages for the sake of lacrosse. In 2015, the nation didn’t have enough money to register its regular lacrosse team, so about 80 residential school survivors donated the $3,000 given to them by the federal government following the recommendations of the Truth and Reconciliation Commission.

Since lacrosse resembles the basics of basketball, the CLA has begun finding basketball coaches and referees in Aboriginal communities to train them in teaching the game. The organization also sent out six equipment packages with 30 sticks and balls, worth $800. Provincially, the British Columbia Lacrosse Association has trained more than 21,000 Indigenous players and coaches in the past five years. In remote communities, “there might only be 10 or 15 kids who will pick up a stick,” says director Rochelle Winterton, “but we want to reach those 10 to 15 kids.”

Lacrosse has been hailed as saving Indigenous lives. In February 2000, six children committed suicide in Kugluktuk, Nunavut, before a teacher named Russ Sheppard moved from Saskatchewan and started the Stay-in-School Grizzly Lacrosse Program. He demanded that his players maintain an 80 per cent class attendance record, and boosted the school’s overall attendance from 20 per cent to nearly 100 per cent rapidly. Players ran a canteen at the arena to pay for their jerseys and travel expenses for national tournaments. Kugluktuk saw no suicides for the next five years.

“The Creator himself gave lacrosse to us as a form of medicine,” says Jamieson. “The energy used in lacrosse, you can use that [to] scare sickness away from the tribe.” As a confederation of First Nations including the Mohawks, the Iroquois first played the game that became lacrosse in Michigan and modern-day Quebec. Men gambled on the games, with territory and prizes at stake, so the game mobilized goods and distributed wealth more equally between nations. As an outlet for anger between tribes, the game helped resolve conflict and also kept men healthy. Since games were timed with the seasons, it enforced spirituality, along with gender roles, as women stayed on the sidelines, though occasionally ran onto the fields to shout unsolicited coaching advice.

But to settlers, especially in the United States, the game reinforced the stigma of Indigenous people as savages, who would chase the ball on the ground en masse and bruise each other. In the 1830s, the French in Montreal changed the stick to allow for more passing and teamwork, and named it lacrosse, a generic term for a game with a curved stick.

A teenage dental apprentice from England, William George Beers, wrote rules for the game in 1860, and he went on to limit the number of players to 12 per team and introduce an umpire. He wrote, “the present game, improved and reduced to rule by the whites, employs the greatest combination of physical and mental activity white men can sustain in recreation and is as much improved to the original as civilization is to barbarism, baseball to its old English parent of rounders, or a pretty Canadian girl to any uncultivated squaw.”

Indigenous players were too skilled. When white men started forming their own teams, they banned Aboriginal people from participating, though they sometimes played—and lost—against all-Indigenous teams. Settlers also weren’t as fit, so they shrank the standard size of the field.

Yet, ironically, lacrosse became a tool to attract more colonizers. Indigenous players were brought on tour to 42 European cities to attract migrants to Canada in the 19th century. They attracted crowds of up to 7,000 people in Britain—as one reporter wrote, “from the professor who doffs the gown for the occasion, to the little urchin who can barely scrape together 50 cents for a crosse.”

Lacrosse sticks became plastic, and camps sprung up for children in Pennsylvania, Maryland and New York, who could earn scholarships to boarding schools. “I wouldn’t say it’s cheapened the game,” says Ansley Jemison, general manager of the Iroquois Nationals, “but at the same time, it’s turned it into the same as anything else, maybe soccer, basketball. It doesn’t have as much significance to it.” Organizers tried to start professional leagues twice in Canada, with teams like the Toronto Shooting Stars and the New Westminster Salmonbellies, though the attempts failed (twice) to turn lacrosse into the hockey of summer. Americans established the National Lacrosse League in 1986, and three Canadian teams currently play in it: the Toronto Rock, the Saskatchewan Rush and the Vancouver Stealth. Equipment and travel expenses pushed the sport into the upper middle class, and top players started coming from Johns Hopkins, Princeton and Syracuse universities.

RELATED: What if feels like to play box lacrosse with the Victoria Shamrocks

No Indigenous players are currently on Team Canada, and at the 2017 World Indigenous Games in Alberta, there was so little interest in the sport that the organizers had to cancel the events and merely demonstrate the sport. However, the Iroquois Nationals is one of the top three teams in world competitions, and the level of play is improving at the North American Indigenous Games. In B.C., Rohelle Winterton says, “you used to beg kids to come.” This year, she says around 60 players tried out for the province’s team.

Cody Jamieson earned a full lacrosse scholarship to Syracuse, having played since age three, himself. He’s teaching his son to shoot outside the crease and carry a ball in the net of his stick, a skill called “cradling,” while Comyn’s still small enough to be cradled himself. When Jamieson’s wife was pregnant, he had a wooden lacrosse stick made. On Comyn’s first night, he placed it in the crib.