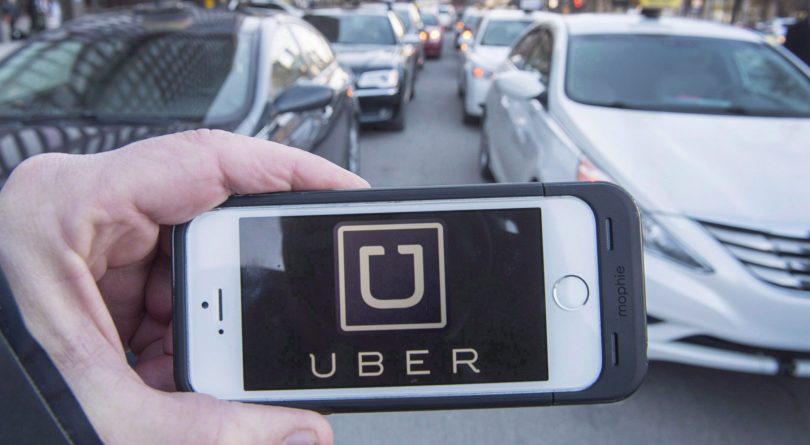 The town of Innisfil and Uber have signed a deal to expand their partnership by adding two new flat fare destinations. They say rides to the Innisfil ideaLAB and Library as well as the South Innisfil Community Centre will be $3. The Uber logo is seen in front of protesting taxi drivers at the courthouse in Montreal on Tuesday, February 2, 2016. (Ryan Remiorz/CP)

Like every other public transit system, Innisfil Transit has a fancy logo, flat-rate fares and plenty of folks who use it to get around town. What it doesn’t have, however, are buses or trains, unionized drivers, transit stops, fixed schedules or any of the other expensive and complicated burdens of conventional transit systems.

Last year, Innisfil, a community about an hour north of Toronto, had a decision to make. Its population of 37,000 was growing quickly thanks to urban out-migration, and these new residents were starting to demand some big-city amenities they’d left behind—like buses. Unfortunately, the town’s geography doesn’t lend itself well to transit. “We’re a big place with lots of small settlements scattered about,” observes Deputy Mayor Lynn Dollin.

A feasibility study revealed it would cost more than $600,000 to build a two-bus transit network that would still leave most of the town without service. “We figured there had to be a better way,” Dollin recalls. That better way turned out to be partnering with Uber, the often-controversial ride-sharing app.

RELATED: Why Uber’s manipulation of drivers is so wrong

Rather than build a typical transit network, Innisfil gave the job to Uber. Residents use their smartphones to book rides and the town pays a subsidy for every trip. Flat fares of $3 to $5 cover rides to and from popular destinations such as the arena, library and industrial district. Other trips get a $5 discount off regular rates. When possible, riders are required to double up.

After a seven-month trial period exceeded expectations, Innisfil rolled out an expansion in March: more flat-fare options, a bigger subsidy budget and an Innisfil Transit logo (self-identifying in this way is necessary to access provincial funding).

Ride Innisfil Transit and the appeal of an on-demand transit system quickly comes into focus. “This is the wave of the future,” Uber driver Wanda Luoma says assuredly. Mornings and afternoons, she explains, the action centres on the local commuter train station. In the middle of the day, however, Nantyr Shores Secondary School is where every smart Uber driver wants to be.

Luoma swings by Starbucks in her Honda Fit to pick up students Taya Rommelaere and Sylvia Bingham. “We’re on lunch right now,” says Sylvia, “so we Ubered over.” Now they’re Ubering back. While the high school is not a $3-flat-fare destination, the standard $5 discount makes it cheap enough to seem insignificant. When school is out, Uber rides line up like yellow buses. It provides all the benefits of a personal chauffeur without the hassle of having to talk to your parents.

Besides the incessant student traffic, plenty of other residents make use of Innisfil Transit. “We’re down to one car,” housewife Shelley McGee explains on her way back from a workout at the YMCA. “Before, if I wanted to go anywhere, I’d have to wait for my husband to get home.” Ridership hit a new record of 6,500 in March. At an average subsidy of $5 per ride, it’s still a bargain compared to the $33-per-rider subsidy predicted for bus service. But if ridership continues to grow, Dollin is aware the town could eventually spend more on Uber subsidies than it would have on buses. “It could get too popular,” she admits.

Perhaps the most powerful result of the Uber deal is how it is providing the town with a new form of leverage. “The flat fee has become a way to direct traffic,” observes Paul Pentikainen, Innisfil’s senior policy planner. Given the value of being a flat-fare destination, other locales, such as a nearby outlet mall and a resort community, are eager to offer the same feature. Now the question, says Pentikainen, is “what are they willing to contribute to the subsidization of traffic to their location?” The idea that businesses could be asked to directly contribute to the cost of getting potential customers to their front door is something of a municipal revolution—and any mayor’s dream.

Innisfil is not the first North American town to get Uber to run its transit system, though those others lack Innisfil’s unique flat-fee feature. Uber and competitor Lyft also have agreements in some U.S. cities to get passengers between transit stations and their homes. Adam Blinick, director of public policy for Uber Canada, figures this service—often called first mile/last mile—is where Uber can make its biggest contribution to reducing congestion. “Ride-sharing is a complement to public transit,” he says.

For big cities used to seeing Uber as an unregulated interloper, thinking of Uber as a congestion-fighting partner requires a heroic reassessment. Josh Colle, chair of the Toronto Transit Commission, says Toronto could soon see greater accommodation of ride-sharing at transit stops for first mile/last mile travel. Even more revolutionary would be the notion that some money-losing routes could be dropped or curtailed in favour of subsidized ride-sharing apps. “Does it make sense to have a 40-foot bus winding through the suburbs late at night?” asks Colle carefully. “Or can we serve that route in other ways?”

The arrival of autonomous vehicles will likely further shift the economics of public transit away from major infrastructure projects toward tech-heavy alternatives. The only problem is that if Innisfil is our guide, it might prove so popular it one day replaces walking. But then again, when did public transit ever have a popularity problem?