How Prince George's high-five refusal might be changing hearts

Prince George refused Justin Trudeau’s high-five and won some Canadians over. Next up: slaying republicanism? 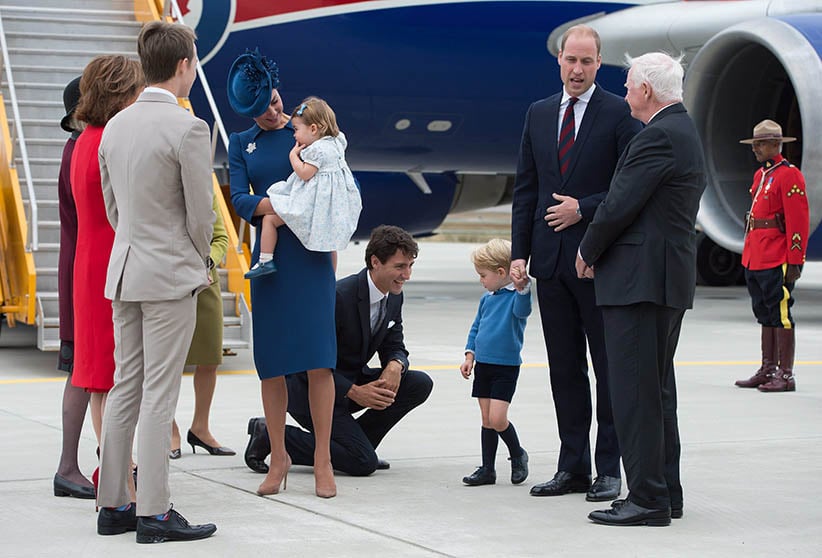 Prime Minister Justin Trudeau, centre, kneels to talk to Prince George as his father The Duke of Cambridge speaks with Governor General David Johnston, right, and The Duchess of Cambridge holds their daughter Princess Charlotte upon arrival in Victoria, B.C., on Saturday, September 24, 2016. (Jonathan Hayward/CP)

Prime Minister Justin Trudeau learned a hard lesson on the tarmac of Victoria International Airport: Don’t mess with a three-year-old prince named George. In an awkward moment captured by the world press, Trudeau crouched down to the little boy’s level and offered Prince George a low-five, then a high-five and then an ordinary handshake. All were rebuffed by the third in line, who shook his head at the Canadian politician.

“I feel badly for the Prime Minister,” says Jim Armour, a vice-president at Summa Strategies and a former communications chief for Stephen Harper. “It’s next to impossible to get a three-year-old to do something he doesn’t want to.” Whether it was jetlag—he and his 17-month-old sister, Charlotte, had just crossed eight time zones from London—or a display of royal stubbornness, the PM’s failure generated lots of headlines and talk in political circles. “The Conservative side of the House is trumpeting Prince George as their new hero for snubbing the Prime Minister,” Armour says.

It’s not the first time Prince George has bested politicians. In 2014, when he was an eight-month-old baby, his grumpy expressions and squirmy antics so captivated Australians that support to ditch the monarchy dropped to its lowest level in 35 years. Anti-monarchy politicians despaired as he was given the nickname of “republican slayer.”

George isn’t the only photogenic young royal to have changed hearts and attitudes—also to the fury of politicians used to getting their own way. When George’s father, William, was himself a baby, his parents, Charles and Diana, took him on a similar trip Down Under. It was 1983 and the new staunchly republican prime minister Bob Hawke wanted to cut all ties to the House of Windsor by 2000. That hope was soon crushed by the massive crowds that turned out at every stop on the Australian tour to see the royals. “We haven’t seen this in royal tours here before,” said one policeman. “It is more akin to Beatlemania.”

Royal youngsters, especially future monarchs, represent the continuity of an institution that has outlasted myriad political dynasties and ideologies. When George’s great-grandmother, Elizabeth, turned 21, she pledged her “that my whole life whether it be long or short shall be devoted to your service.” Even republicans grudgingly admit she has kept her vow.

In an era where politicians are decried and distrusted, cheering for someone devoid of such purely short-term motivations is back in vogue. That’s one of biggest advantages of monarchies. In 1952, the newly deposed King Farouk of Egypt famously said there would soon be just five monarchies: the kings of spades, hearts, diamonds, clubs, and Britain. He was wrong of course.

Sometimes, all it takes is an energetic royal. In 2014, King Felipe of Spain took over from his scandal-plagued father. Opinion polls turned around and the throne now looks secure for his 10-year-old daughter, Leonor.

And so it goes for a certain little boy in his first year of nursery school. As one former opponent to the Canadian Crown said, “My resistance to the monarchy has been broken down by George. He’s as cute as a button.”