A journalist argues the new climate has led to people without things like unemployment insurance, retirement savings and a feeling of security 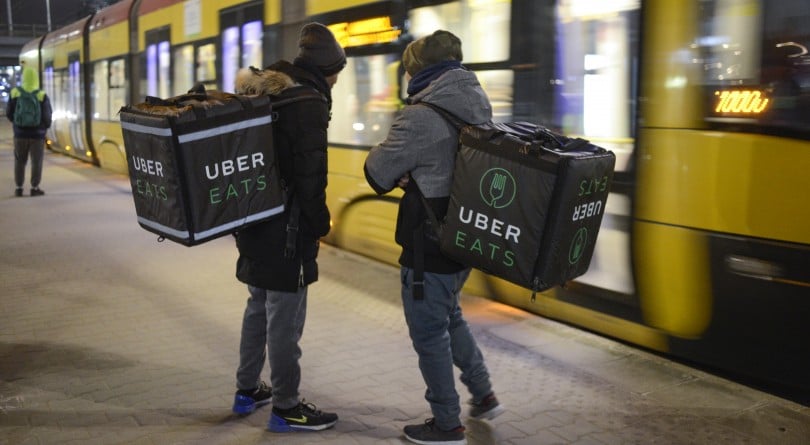 Uber Eats delivery workers are seen waiting for a tram in central Warsaw, Poland on February 27, 2018. (Photo by Jaap Arriens/NurPhoto via Getty Images)

“The full-time job—to which we’ve attached all of the rules about treating workers fairly—is dissolving, and the community of workers who are treated as second-class citizens, who aren’t protected by the same laws or entitled to the same benefits as other workers, is growing. That is a big, scary problem.” That is how Sarah Kessler concludes her engaging new book, Gigged, about today’s economy. The deputy editor of the news website Quartz at Work’s, Kessler approaches her topic with even-handedness and rigour, and Uber emerges as a particular villain.

After its pricing model was leaked to the press, Uber’s internal calculations for drivers’ wages minus expenses—much less than Uber was boasting in its recruitment advertising—became public. “On average, it estimated they were making $10.75 per hour in the Houston area, $8.77 per hour in Detroit, and $13.17 in Denver, which was slightly less than Walmart’s average full-time hourly rate in 2016… Unlike a minimum-wage job, driving for Uber came without any paid breaks or benefits like health insurance. What it paid could change any time.”

Kessler cites the insightful work of Seattle team David Rolf, a union leader, and Nick Hanauer, an entrepreneur and venture capitalist. “If our captains of industry are so certain that certainty is necessary for industry,” they conclude in an article for the online magazine Evonomics, citing a common argument against changing business regulations and adding new benefit programs, “then it surely must be true that their customer base, the American middle class, needs some of that certainty as well.” From New York, Kessler spoke with Maclean’s about race, the problem with Big Tech, why being classified as independent contractors makes it much harder for labour to organize, and what’s next.

READ ALSO: Inside the fight for the future of grocery delivery in Canada

Q: Why did you write Gigged?

A: The way people work is changing in a major way. A large portion of job growth is in temporary and independent work, which doesn’t come with the benefits, labour protections or predictability of traditional employment. As I was reporting on this trend, I was listening to a lot of conversations between Silicon Valley entrepreneurs, politicians and union leaders. Nobody was talking to workers who had actually participated in this shift, which is what I wanted to know about. What did this change mean for their experience—what does it mean for our lives? I hope the way I told the story—by following five people who are working in different parts of the gig economy—gives people a nuanced understanding of what the shift away from traditional jobs means for the economy, policy and people’s lives, but does so in a way that is personal and interesting to read.

Q: What changed your perspective while researching it?

A: I started reporting on the gig economy in 2011, when I was working at a tech blog. At the time, I was interviewing two or three entrepreneurs every day, and I started to notice a trend in start-ups that were pitching a way to end unemployment with their apps—all you did was press a button, and work came to you. One of them was Uber—I didn’t think it would work out. As a 22-year-old, the whole idea of the “gig economy” sounded pretty good to me. Then, a few years later, when I was working for Fast Company Magazine, I decided to try to make a living in the gig economy for a month. Because I had every advantage in the world—a college degree, professional-, I hope, level writing skills, white skin—I thought this would be easy. But I failed miserably. Finding work was difficult. When I did, it was unpredictable and required me to be available instantly. I kept agreeing to do work for cheaper and cheaper pay with the hope of competing with other workers. I realized that the narrative was much more complicated than the Silicon Valley story, and I wanted to see how the story looked like from different perspectives.

Q: Gigged captures Uber’s bad behaviour with numerous arresting points. “Other drivers, who had signed up to finance their cars through Uber, felt that Uber had made it impossible to quit. As the company [significantly and suddenly] lowered rates, a bigger and bigger portion of their per-mile earnings was automatically deducted from their checks to pay for the car they’d acquired to do the job.” Uber lied about how much their drivers would make, right?

A: The way Uber advertised its jobs, at least early on, was as an opportunity to become an entrepreneur. They published press releases saying that drivers made $90,000 per year, even while internally calculating that—after expenses—drivers took home an amount that looked much more like the minimum wage.

Q: And to add to the confusion, as Gigged notes, Uber changed fares frequently and without warning. “In Kansas City, where Abe lived, one seasonal price cut, in January 2015, lowered the price of a 19-mile trip from the airport to downtown from about $38 to $22.80. The company made similar price reductions in 47 other cities around the same time.” The case seems much stronger for Uber and Deliveroo and Grubhub workers, etc., being employees rather than contractors?

A: It’s about 20 per cent to 30 per cent less expensive to hire an independent worker than an employee, so there’s a huge incentive to classify everyone as an independent worker. But we don’t have a clear-cut system for deciding which category a worker should be placed in—there’s a lot of grey territory, and that makes it easier to cheat. When it comes to apps like Uber, Deliveroo and Grubhub, different courts have made different decisions about whether their workers should be employees. Meanwhile, technology makes it easier to toe the line—for instance, if something like training makes it more likely for workers to be declared employees, there’s a way to have the app guide workers without technically providing training.

Q: Being classified as independent contractors (rather than employees) also makes it much harder for labour to organize, doesn’t it?

A: Yes. In the book, I followed a few efforts to organize workers in the gig economy. The traditional tools don’t work. If you’re going to plan an Uber strike, as one person who I followed did, how do you find your fellow drivers to tell them a strike is on? How do you know if they’re striking? At one point, someone was driving around with a megaphone yelling, “There’s a strike.” On top of that, freelancers don’t have a federally protected right to unionize. They’re not protected from retaliation and can be considered to be “colluding” if they negotiate pay.

Q: Is the gig economy essentially—with exceptions like Airbnb and the likes of your NYC programmer Curtis Larson on Gigster—about exploiting cheap marginalized labour? Robert Reich, formerly Clinton’s secretary of labor, calls it a sweatshop. You write: “In New York City, where the living wage for a family of four is $46,000 in a year, a group that said it represents 50,000 ride-hail drivers told The New York Times that more than one-fifth of its members earned less than $30,000 in a year, before expenses.” Supposedly liberal media leaders like Thomas Friedman credulously said the gig economy is “surely part of the answer” to America’s economic malaise.

A: Yes, early on there was a lot of buy-in to the pitch that the gig economy would solve economic problems. I don’t think that it’s wrong to say the gig economy does solve problems for some people. Curtis, the programmer I followed in my book, for instance, used it to find clients instantly after he quit his job. It gave him immediate flexibility and independence. The problem is that Silicon Valley entrepreneurs act like this is the story for everybody. It’s not. If you can’t save a year’s worth of living expenses, like Curtis did, and you’re living paycheque to paycheque, it’s a big deal that you don’t know how much you’re going to make next week.

READ MORE: How the weekend has disappeared and why we need to take it back

Q: After Obama’s soaring campaign oratory about a fairer American economy, we saw the rise of the unfair aspects of the gig economy under his watch. Was that disappointing?

A: The app-based gig economy is part of a decades-long trend in companies trying to employ as few people as possible. It’s just the mobile and digital tech-fuelled version. Under the Obama administration, the Labor Department issued guidance that made it more difficult to classify workers as independent contractors. It was intended to cut down on employers cheating their workers out of benefits and labour protections by calling them freelancers. The Trump administration rescinded that guidance.

Q: When you investigated being a cleaner for a Dickensian New York gig economy cleaning joint, most of the workers were African Americans. Is there a racial aspect to the gig economy?

A: African Americans face discrimination in the workplace. You would expect this to carry over to the gig economy and online platforms, and the evidence suggests it does. Take a recent study on discrimination on Airbnb, for instance. When guests had African American-sounding names, hosts were less likely to accept them than they were guests with identical profiles but white-sounding names.

Q:  “If poor people knew how rich rich people are, there would be riots in the streets,” Chris Rock put it. What’s next?

A: According to one estimate, between 2005 and 2015, almost all jobs created in the U.S. were in categories like temp work and freelancing. This trend is a huge problem for countries that have attached all of their social insurance to the traditional job. Things like health insurance, retirement-savings programs, unemployment insurance, worker’s compensation and regular work help people feel safe and secure. Security helps people buy things and take risks like starting businesses—and it’s worth figuring out how to protect it even as work is changing.