How the Pope became so mighty 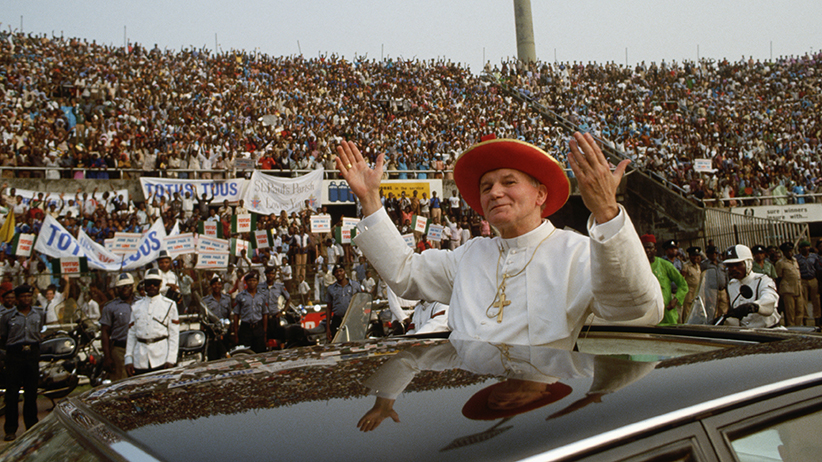 Pope John Paul II waves to the crowds during his visit to Nigeria. (Vittoriano Rastelli/Corbis/Getty Images)

In 1799, the ailing 81-year-old known as citoyen Giovanni Angelo Braschi to the French Revolutionary authorities who kept him imprisoned, and as Pope Pius VI to the world’s Roman Catholics, died in Valence in southeast France. It was one of the lowest points in the life of the oldest governing institution in Western civilization, notes Church historian Paul Collins. The papacy had suffered nothing like it since the era of the Cadaver Synod of 897 CE, when one enraged pontiff exhumed the body of his predecessor and put it on trial. “Back then, the papacy was the creature of the mafia-like rival families who controlled Rome,” Collins says. “The philosophes, the Enlightenment thinkers of Europe, as well as the revolutionaries and many Catholics, thought the papacy was extinct.” And contemptibly insignificant—Pius was left unburied for five months.

But a funny thing happened on the way to oblivion, as Collins documents in Absolute Power: How the Pope Became the Most Influential Man in the World, his absorbing account of how the papacy got from there to here. Through interrelated structural and conceptual changes unleashed during the Revolutionary era, the popes’ hard, geopolitical power evaporated, while their soft power and control over the Church grew exponentially. Two centuries after the body of Pius VI lay ignored, 74 presidents and prime ministers and 10 reigning monarchs were among the millions present at the largest funeral in human history, when Pope John Paul II was laid to rest. The “Polish Colossus”—as Collins, no admirer, calls him—was a significant figure in international affairs and in the spiritual lives of hundreds of millions.

MORE: 2018 will be the year of the polarized church

After Pius VI’s death, the election of a diplomatically adroit successor pope, Pius VII, maintained the papacy on life support. Eventually, the bishops of Rome even managed to regain control of the Papal States, their central Italian territory, which was among the most backward and ill-governed polities in Europe. But if the Revolution failed—by inches—to extinguish the papacy, it did sweep away the popes’ only rival for power within the Church: Gallicanism.

Named after its particular strength in France—although it was Henry VIII in England who took the concept to its logical conclusion—Gallicanism preached the alliance of throne and altar and the (relative) independence of national churches. Popes were hedged about in their ecclesiastical powers, especially in the crucial area of naming local bishops, by royal authority. But in newly anti-clerical 19th-century Europe, bishops without domestic political support increasingly looked “beyond the mountains” to the papacy for aid. Ultramontanism became the ideological basis for papal primacy within Catholicism.

In the later 19th century, the tides shifted further to papal advantage. Italian unification stripped the popes of temporal power but also, particularly in the English-speaking democracies where Catholicism was flourishing, of their deserved reputation as petty political tyrants. Unopposed by indifferent European governments, Pius IX entrenched papal primacy and papal infallibility, his control levers over the entire Church, at the first Vatican Council in 1870. The popes’ championing of popular piety, including an intense devotion to the mother of Jesus as a healer and comforter—in 1854, Pius IX proclaimed the doctrine of the immaculate conception of Mary, meaning she, like her son afterwards, was born without the stain of original sin—was welcomed by most Catholics. And papal social justice teaching—“always pro-worker and deeply suspicious of capitalism,” says Collins—no longer seemed anti-modern but exactly what the era demanded.

In 1891, Pope Leo XIII (1878 to 1903) issued the encyclical Rerum novarum, which Collins calls “probably the most important papal use of soft-power influence in the modern world.” Expressing what would now be called a “preferential option for the poor,” and demanding rights for the industrial proletariat, Rerum novarum established the template for 125 years of Catholic socio-economic doctrine. The stage was set for the contemporary papacy, powerless but influential, although it took modern technology—the TV cameras trained on John Paul II during his astonishing 104 international journeys—to create the first “omnipresent” celebrity pope.

For Collins, a 77-year-old Australian who departed the priesthood in 2001, the rise of the modern papacy has not been entirely positive. Its “besottment” with death-grip control over the Church may have amplified the voice of the pope to the outside world, Collins allows, but that benefit is dwarfed by the harm it does the faithful. The difference in fundamental attitudes within global Catholicism—in sexual theology, for instance, the African church is far more traditionalist—means Rome must yield authority in some matters. “It needs to surrender the right of appointing bishops” and allow local churches to have the leadership they want, he says. “The papacy’s job is to hold us all together, yes, but by guidance, not fiat.” And if that weakens its soft-power influence, so be it, but it may well enhance that power.

MORE ABOUT THE CATHOLIC CHURCH: