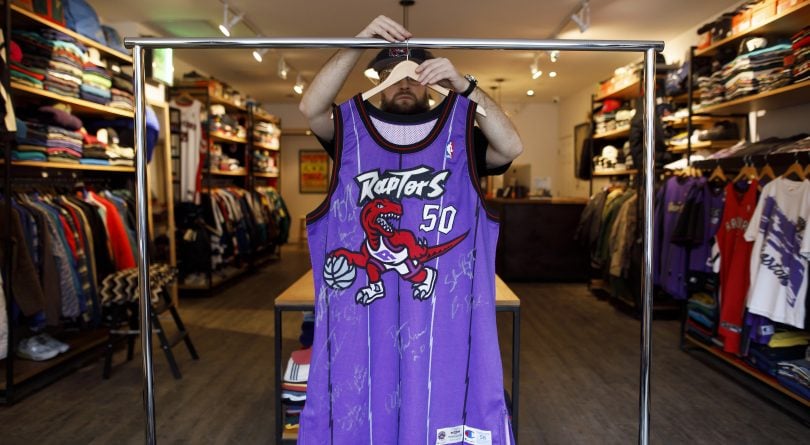 This season, for its 25th anniversary year, the Toronto Raptors have decided to take the opportunity to celebrate everything about the franchise’s history. Included in the team’s plans for a trip down memory lane are six ‘95-Rewind home games, where the Raptors will wear their original white-and-purple dinosaur jerseys and play on a replica home-court design from their inaugural season in 1995.

The team’s first ‘95-Rewind night was in late Oct. against the Orlando Magic. They will wear their throwback jerseys again when Kawhi Leonard returns to Toronto as a member of the Los Angeles Clippers on Wednesday, Dec. 11. It feels like a symbolic choice. Leonard delivered a championship as a Raptor, but he only stayed for a year. Seeing him on the dino-logo home court will be a reminder of the Raptors’ history and how they’ve been part of Canadian culture for over two decades—even before last year’s historic run.

Remember that a giant dinosaur dribbling a ball on a purple-and-red jersey was once considered tacky, even for 1990’s style standards. Over the years, fans have looked back more fondly on the uniforms that many ridiculed. The nostalgia reached a fever pitch last season, as the Raptors—the team who once played in a baseball stadium and were the laughingstock of the NBA for so many years—made a run to the NBA finals, eventually beating the Golden State Warriors to win a championship.

MORE: The ringmaker behind the Toronto Raptors championship bling

Owners of In Vintage We Trust, Josh Roter and Chantel Varela, have been collecting vintage items for several decades. Their shop is located in Toronto’s Parkdale neighbourhood.

Roter collects all kinds of sportswear, including college basketball warm-up jackets from the 1980s, game-worn baseball jerseys, sideline jackets and other one-of-one items. As a lifelong fan, Roter has been collecting Raptors items for over two decades.

One of them is an inaugural season game-worn Raptors jersey, signed by the entire team including the franchise’s first-ever draft pick and 1995-96 Rookie of the Year Damon Stoudamire. In 2010, he was sourcing product in Mississauga, when he came across a sports-card store in a strip plaza. Sifting through snapback hats and vintage hockey jerseys, it was this Raptors jersey, with the player’s name having been stripped from the back, which caught his attention.

After doing a few searches on basketball reference sites, Roter was able to match the number of the jersey to a player named Thomas Hamilton, who had spent just a handful of days with the Raptors during their first pre-season before he was waived. Roter purchased the jersey right away. A few years ago, it was sold to another local collector.

Not every piece of Raptors memorabilia in the store has a one-of-a-kind backstory. Because Raptors items were not very coveted when the team was going through a downturn, they often sat in stores. Roter owns an authentic red and black Nike Vince Carter Raptors jersey from the 2004-05 season, which he remembers purchasing from the clearance rack at Toronto’s College Park shopping mall for $24.99 immediately after Carter was traded to the New Jersey Nets. Today, the jersey is selling for over $250.

The Raptors championship run and the team’s celebration of the 25th anniversary season has changed everything. During the playoff run, many customers came into the store to ask for apparel from the dino-logo era. At the same time, Roter and Varela were trying to find more items for their next Raptors-themed drop.

Roter and Varela had their eye on the Toronto Raptors Barbie doll, which was selling for over $700 on eBay. In the late 1990s, the NBA had a licensing deal with toy company Mattel to produce Barbies for each team. They were eventually able to purchase the Barbie at a reasonable price this fall, which is still available in store for $200.

It has become increasingly difficult to find vintage Raptors goods in the market. Last year, while at a trade show in Illinois, Roter was able to pick up three 1997-98 authentic Nike Raptors shooting shirts, which were worn by point guard Chauncey Billups and Alvin Williams, one of the most popular Raptors players during that era.

Most of the remaining vintage Raptors goods are just sitting in boxes in people’s basements and in attics across the city of Toronto, Roter says. He recently met a vintage dealer in the city, who he sources Toronto Blue Jays items from, and thought to ask if she had any Raptors gear. The dealer produced a box of every Raptors pin given to fans at the arena during the franchise’s early years. Roter bought the entire box and now sells the pins for around $20 each in store.

By just digging through the collections of local dealers, Roter’s also found other memorabilia that has sentimental value to him, and many other Raptors fans, including a row-1, seat-1 ticket from the inaugural game at the SkyDome in 1995, and a media pass from the franchise’s first playoff game in 2000 at Madison Square Garden.

Though Roter has been collecting pieces of the franchise’s history since its inception, he admits he still wants to buy every single Raptor item he comes across. But restraint is necessary. In the vintage business, buying an item at a high cost means that you have to charge customers a premium. This is why Roter passed on the leather jacket worn by part-owner and vice president of the Raptors Isiah Thomas at the team’s introductory press conference. It was priced at $1,200 USD.

The Raptors-themed drop at In Vintage We Trust will include authentic jerseys, dino-logo t-shirts, Vince Carter tees, puffer jackets and whatever else Roter and Varela can find between now and then. Unlike yesteryears, these items won’t be sitting on shelves for too long.

“Now that the Raptors are good,” Roter says, “Everybody wants a piece of history.” 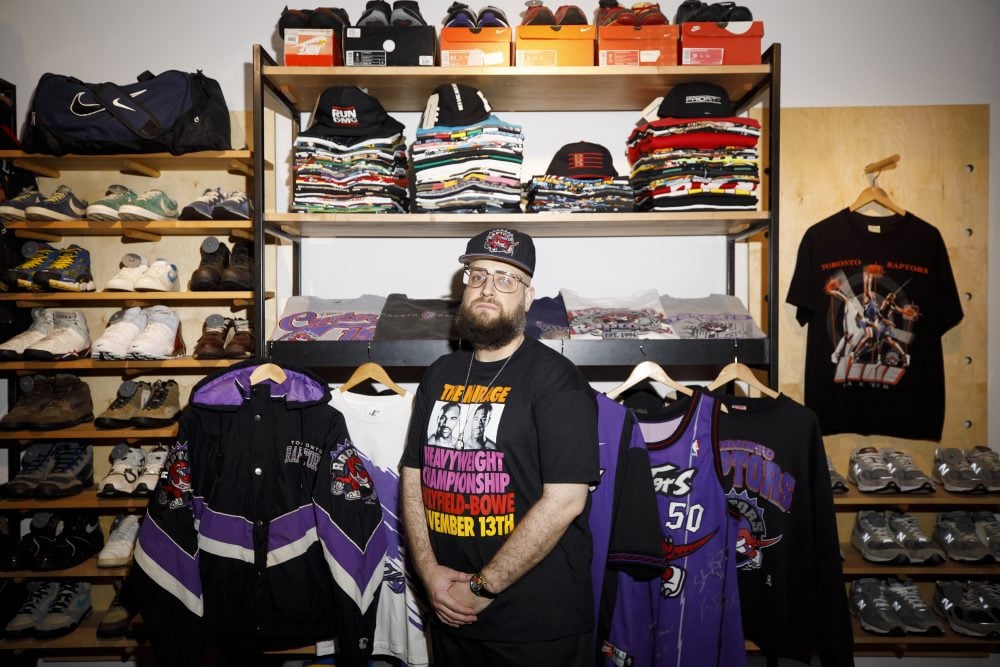