How the Stanley Cup spent its summer vacation

With the National Hockey League and its players locked in a cold war stalemate, another hockey icon is headed for the ice rinks of Europe—the Stanley Cup.

But unlike NHL players now suiting up in pro leagues from Switzerland to Russia, the championship trophy won’t be there long. The Cup will be back in North America before Oct. 11—even though the NHL regular season will not open as scheduled then.

The European sojourn is the tail end of a four-month odyssey the Stanley Cup has been on since the Los Angeles Kings won temporary rights to it by beating the New Jersey Devils in Game 6 of the NHL championship finals on June 11.

In that time, the Stanley Cup has travelled more than 80,000 km—twice the circumference of the earth. It’s been hoisted and hugged and drunk from and danced with in cities, towns, firehalls and lakeside cottages from central Russia to Vancouver Island to the heart of Texas.

Over 50 players, coaches, scouts, trainers and other key members of the Kings organization each got to spend a day with the Cup, sharing the date with families, friends, hometown communities and sometimes random strangers.

The Cup will be in Germany this weekend (Oct. 5-7) for two Deutsche Eishockey Liga games played by the Hamburg Freezers and Berlin Polar Bears — two teams also owned by L.A. Kings owner Philip Anschutz. Looking on will be a couple of current locked-out NHL players, Christian Ehrhoff for Berlin and Jamie Benn for Hamburg, and a dozen or so former NHLers now playing for Anschutz’s teams in Germany. But for most of the other 8,000-10,000 people in the arena, the Stanley Cup’s presence will be little more than a curiosity—and probably one rung down from the DEL championship ring presentation in significance.

“Seeing the Stanley Cup for me is like seeing the (British) Crown Jewels in the Tower of London,” says Ralf Schmitt, Hamburg-based hockey writer for Bild, Germany’s best-selling newspaper. “You go there, have a look. But it’s nothing emotional.”

From Berlin, the Stanley Cup will be flown to Helsinki, Finland, so Kings’ European scout Christian Ruuttu can have his day with it on Monday (Oct. 8). Then it’s back across the Atlantic and back across North America so the Cup is safely in Los Angeles again by Wednesday (Oct. 10).

That was the plan, anyway, when the NHL regular season was supposed to start the following day. With the first two weeks of the 2012-13 regular NHL season now officially cancelled, the Stanley Cup’s hectic schedule is a little more relaxed. The Cup will still return from Europe to L.A. early next week and remain in California until the NHL either resumes play—with a new date for the L.A. home opener and banner raising—or the league extends the cancellation.

After that, the Stanley Cup will be returned to its winter home at the Hockey Hall of Fame in Toronto, where its clone, the Replica Cup made 20 years ago, resides year-round.

The real Cup—the Presentation Cup, as it’s known—is the one that is carried around the rink by champions, filled with champagne and dunked in swimming pools, and which has spent the past four months crisscrossing North America and travelling halfway around the world.

Much of that odyssey has been recorded in a series of regular photo postings in a Stanley Cup Journal: 2012 Edition on the Hockey Hall of Fame website:

After the on-ice celebration at the Staples Center on June 11, when the Kings beat the Devils, the Cup ended up as guest of honour at a late-night team victory party at the North End Bar & Grill in Hermosa Beach. 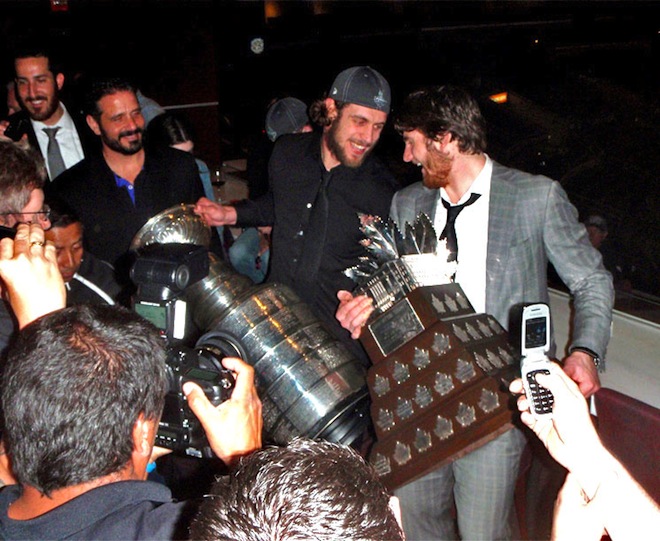 Centre Anze Kopitar holds the Stanley Cup and MVP goalie Jonathan Quick holds the Conn Smythe Trophy as they prepare to leave the Staples Center in Los Angeles after winning the NHL championship on June 11. (Photo: courtesy of the Hockey Hall of Fame.)

The Cup spent the next day at team captain Dustin Brown’s house before making TV appearances that evening (with a supporting cast of Kings players) on the Tonight Show and Jimmy Kimmel Live.

On June 13, the Cup was on the field at Dodger Stadium for the ceremonial first pitch between L.A.’s two baseball teams, the Dodgers and Angels. 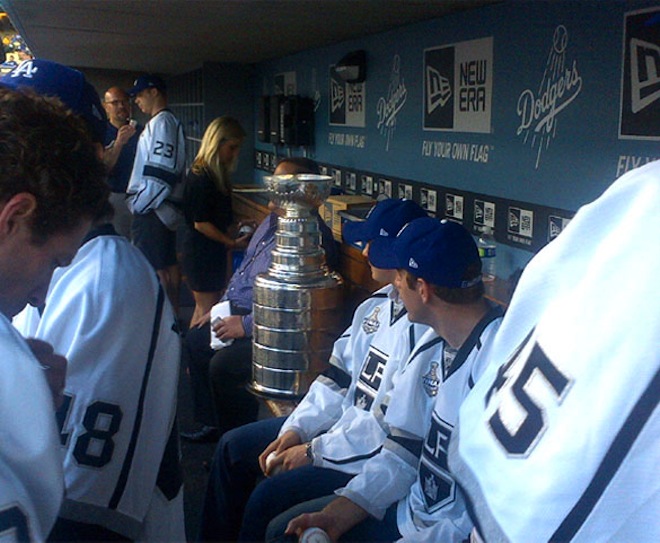 Kings players sit in a dugout with the Stanley Cup at Dodgers Stadium before a game between Los Angeles' two baseball teams, the Dodgers and the Angels, on June 13. (Photo: courtesy of the Hockey Hall of Fame)

Then the big day — June 14 — when the Stanley Cup Parade rolled down Figueroa Street for a raucous rally at the Staples Center, followed by another private team celebration — this time in Las Vegas.

The Stanley Cup — telling no Vegas secrets, of course — was back in Los Angeles by June 17 for a series of events, including a party for Kings players and Canadian Hollywood celebrities hosted by actor Matthew Perry at his hilltop home overlooking L.A.: 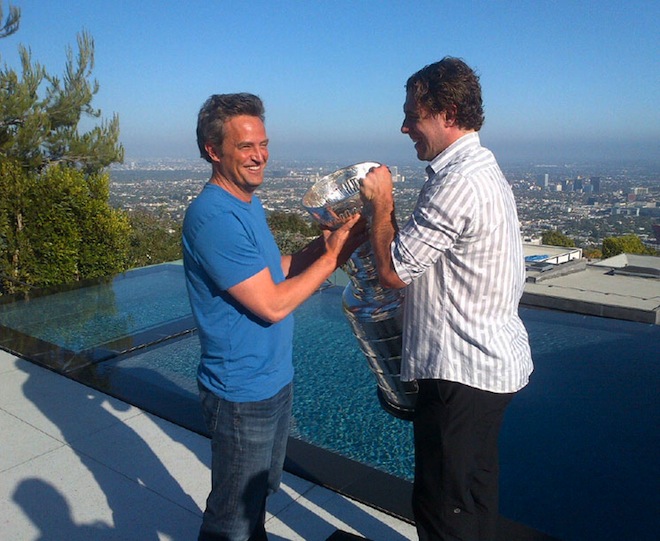 Actor Matthew Perry prepares to take a sip from the Stanley Cup during a victory party Perry hosted for the Kings at his hillside home overlooking Los Angeles on June 17. (Photo: courtesy of the Hockey Hall of Fame)

To Vegas again for the NHL Awards on June 20, to Pittsburgh for the NHL Draft June 22-23 and back to L.A. for a series of public events June 25-30 that included a team visit to the Children’s Hospital, a tour of L.A. police and fire units and attendance (with Dustin Brown) at the premiere of the new Spider-Man movie.

That was only the month of June with the Cup not even on its private itinerary of player and staff visits yet.

That started officially on July 3 when the Cup and Keeper Phil Pritchard — after 27 hours of air travel — landed in Chelyabinsk on the border of Kazakhstan in Central Russia where rookie Kings defenceman Slava Voynov introduced the Cup to thousands of hockey fans in his hometown: 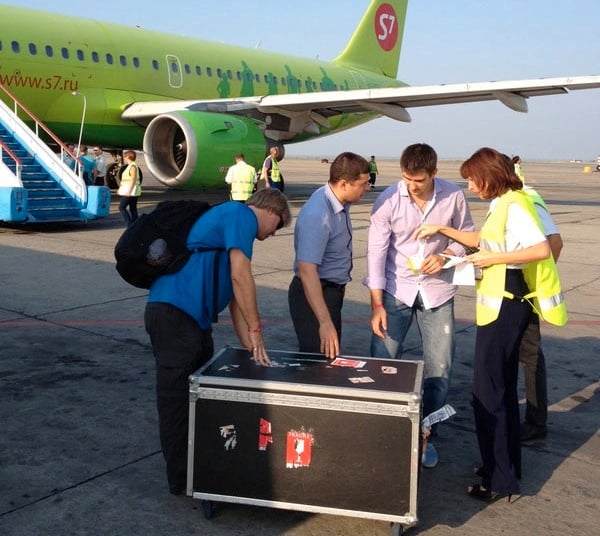 Defenceman Slava Voynov (second from right) greets the Stanley Cup and Keeper of the Cup Phil Pritchard (left) on the airport tarmac after its arrival in Chelyabinsk, Russia, on July 3. (Photo: courtesy of the Hockey Hall of Fame)

Then it was 1,800 km west to the Moscow region where Kings centre Andrei Loktionov  got the Cup the next day to show off in his hometown of Voskresensk.

(Although Loktionov got his day with the Cup in early July, he is not one of the 53 members of the Kings organization whose names were inscribed on the Cup in late September. The Kings said Loktionov, who spent part of the season with the Kings’ minor-league affiliate in Manchester, N.H., did not meet the team’s criteria for Cup inclusion. Voynov, who also spent part of the 2011-12 season playing for the AHL Manchester Monarchs, is one of the 24 players who did get their names on the Cup.)

From Russia, it was on to Hrusica, Slovenia, where the Alps dribble over border from nearby Italy and Austria and where star centre Anze Kopitar was waiting to introduce the Cup to his hometown on July 6. That was the Cup’s first visit to Slovenia: 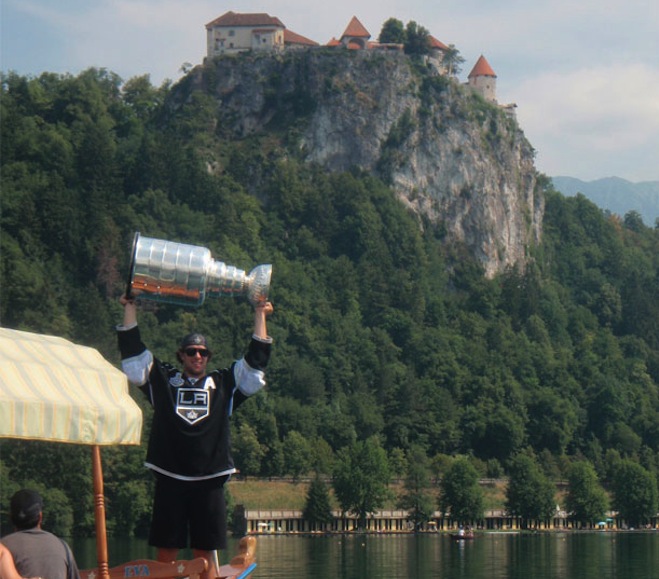 With a castle in the background, centre Anze Kopitar raises the Stanley Cup over his head on Bled Lake in Slovenia on July 6. (Photo: courtesy of the Hockey Hall of Fame)

Two days later the Stanley Cup was 10 time zones away in Kelowna, B.C., where Kim Dillabaugh, a member of the Kings coaching staff in charge of goalie development, got his day with the Cup. And so began a two-month crisscrossing of North America.

Rich Hammond, author of the LAKingsInsider blog, kept track of the Cup’s travels on an evolving map. He figures the Cup travelled more than 62,000 km in July and August alone, hitting 16 U.S. states and six Canadian provinces.

In those two months, the Stanley Cup travelled from British Columbia to Massachusetts to Quebec to the Canadian Prairies, back to L.A., back to New England, to Ontario, a hopscotch run through the U.S. Midwest, followed by B.C., the Prairies and Ontario again, then a dive down through the U.S. Southwest to defenceman Alec Martinez in Texas before returning to Los Angeles Sept. 2. 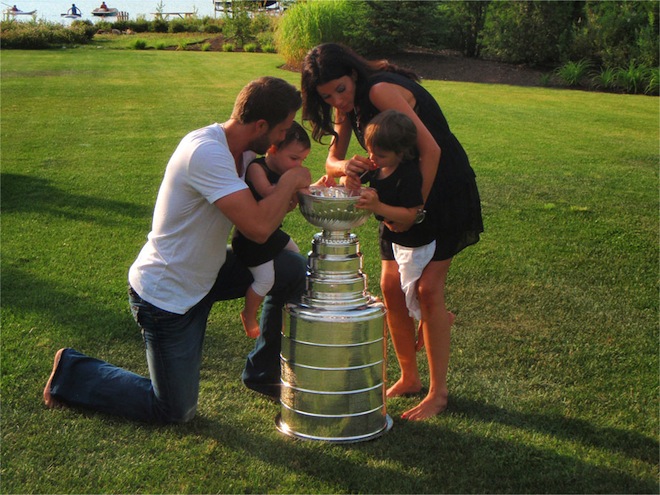 Winger Simon Gagne and his family eat their morning cereal out of the Stanley Cup at their home at Lac Beauport, Que., on July 13. (Photo: courtesy of the Hockey Hall of Fame) 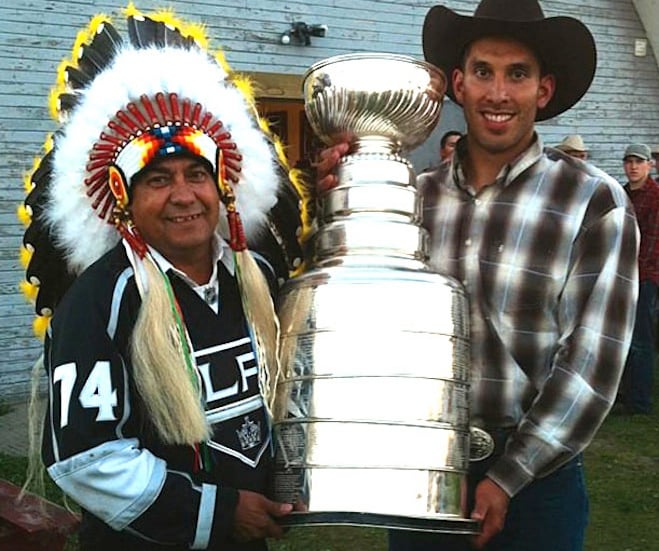 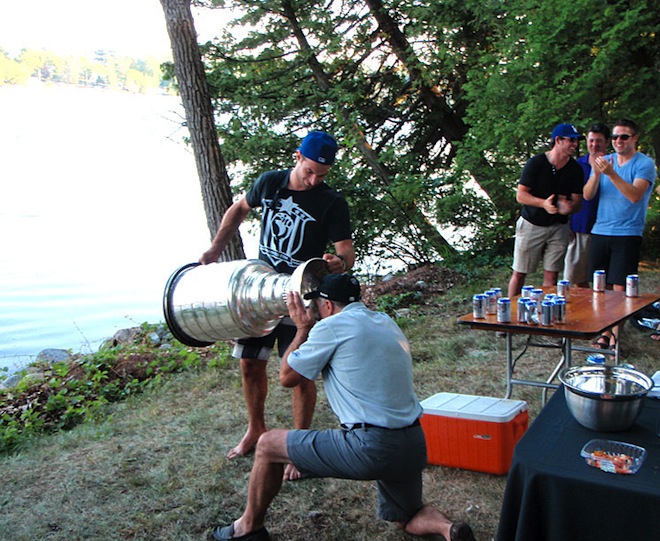 Forward Brad Richardson holds the Stanley Cup while his father takes a drink from it at a family gathering near Belleville, Ont., on Aug. 25. (Photo: courtesy of the Hockey Hall of Fame)

Along the way, the Cup went from a mountaintop in B.C. (Willie Mitchell hired a helicopter to take his family and the Stanley Cup to the top of Mt. Benedict)… 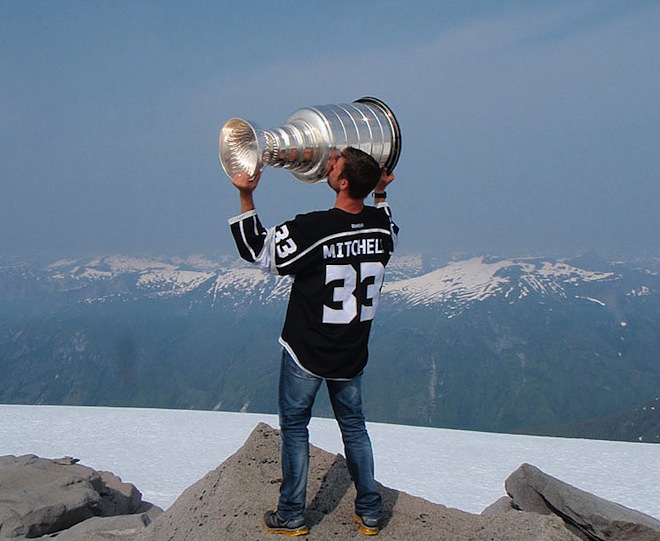 Defenceman Willie Mitchell kisses the Stanley Cup as he stands atop Mt. Benedict on the British Columbia coast on Aug. 12. Mitchell hired a helicopter to take the Cup and his family to the top of the mountain near his hometown of Port McNeill on Vancouver Island. (Photo: courtesy of the Hockey Hall of Fame)

…to a boat ride in the Atlantic off the coast of New England (wearing a life preserver, of course), from a Sutter family reunion in Viking, Alta., to a supermarket shopping expedition with Dustin Brown in Ithaca, N.Y. 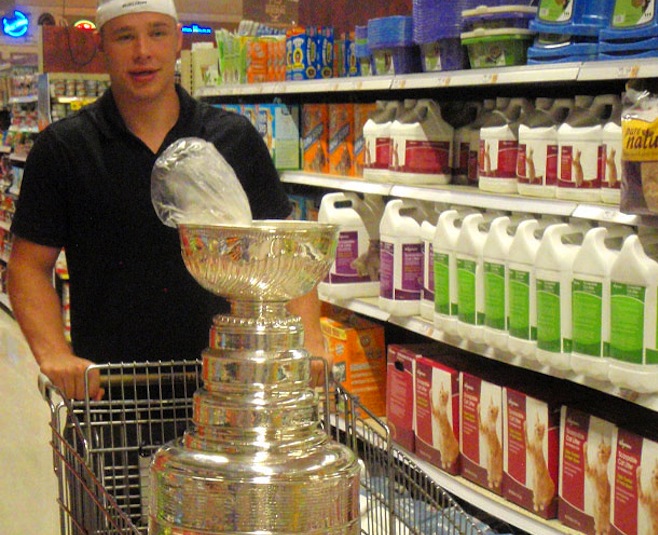 Kings captain Dustin Brown went shopping with the Stanley Cup at a grocery store in his hometown of Ithaca, N.Y., on July 28. (Photo: courtesy of the Hockey Hall of Fame)

In between, there were dozens of small-town parades, backyard barbecues, beach parties, pool parties, golf tournaments, fishing trips and even a little naptime with the Cup for Drew Doughty at his family home in London, Ont.

And always, somewhere in the background, is Phil Pritchard, the Keeper of the Cup, whose day job is vice-president and curator of the Hockey Hall of Fame. He’s in charge of keeping a watchful eye on the trophy: “With the player throughout his day,” as he says, “from the moment he gets it until the moment it leaves.” 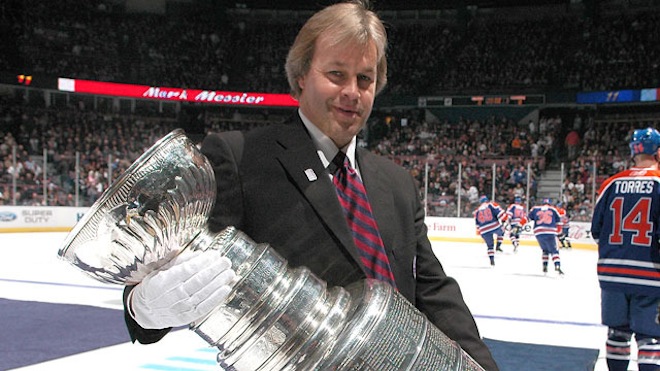 This year’s tour has been a fairly smooth ride, according to Pritchard. No lost Cup. No broken Cup bandaged with duct tape (as was rumoured in the past).

Even controversial former Kings owner Bruce McNall got a bit of time with the Cup, Hoffarth said.

Then it was on the road again to New England (hitting its 17th state of the summer with a visit to the AHL Manchester Monarchs in New Hampshire) and Quebec before arriving in Montreal in late September.

There, engraver Louise St-Jacques spent a week taking the Cup apart, refurbishing it after its busy summer and inscribing the names of 53 members of the Kings organization on the newest band on the base of the Cup.

And now the Stanley Cup is making its farewell tour (for this season, anyway) in Europe before returning home (via L.A.) to the Hockey Hall of Fame in Toronto.

It has been a long, long road. But the journey will begin again next June … if, if, if enough of a 2012-13 NHL season is salvaged to hold legitimate playoffs and declare the new Stanley Cup champions.