How to address sex assault on the subway line 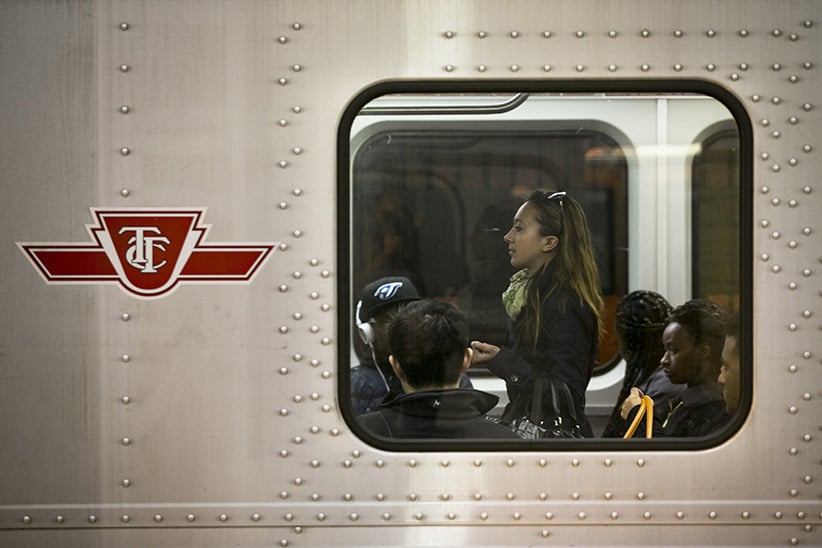 No female between the ages of ten and 110 who takes public transit will be the least surprised by statistics released this week that reveal sexual assault on the Toronto Transit Commission (TTC) is “worse than previously reported.” According to Toronto Police numbers obtained by the Toronto Star, there were 577 reports of sexual assault on TTC property or vehicles between 2011 and 2015—almost one every three days. That’s twice the number released by the TTC, which only records sexual assaults reported to its employees; many report directly to police. Given what we know about the low incidence of sexual assault reporting, the actual number could be at least 10 times that.

Crowded buses and subways are ideal for seasoned predators or newbie opportunists looking to touch, rub, grope, and expose with little fear of reprisal. The TTC is “a target-rich environment,” a Toronto police sex crimes unit spokesperson told the Star. Part of the reason, of course, is that “targets,” i.e., women, are socialized not to make a fuss, or take up too much public space. Our first instinct is often: Am I feeling what I think I am? Am I overreacting? What will happen if I shout out? Should I pull the emergency stop during rush hour?

Toronto is not unique. Reports of public transit assaults are up internationally. Whether this is because such assaults are becoming more common or more reported isn’t clear. This summer, the New York Police Department reported a 50 per cent year-over-year rise in sexual offences—lewdness, unwanted touching, inappropriately taking photos and video—on the subway system. Rape isn’t included: those average two per year.

Complicating understanding, and discussion, of the topic is the fact we tend not to classify public transit sexual predators as the criminals they are. Instead, they’re “pervs” or “losers.” Such linguistic downplaying was seen in news coverage of the TTC numbers. A TTC spokesman called assaults “unwanted attention” and “harassment” in the Star. Another TTC spokesperson referred to “behaviour ranging from groping to conventional sexual assault” on the CBC, seemingly unaware that all non-consensual touching is “conventional sexual assault.” Laws also don’t always recognize the violation involved. In 2012, a man found guilty of masturbating on three women in the New York subway system received a suspended sentence because he didn’t use actual “force.”

Attitudes to public transit assault can be seen as a microcosm of those toward sexual assault generally: focusing on what the woman needs to do, or how she needs to behave, rather than encouraging bystander involvement and demanding systemic change. The TTC boasted of its “request stop” program, which allows passengers to be let off between bus stops after dark. But, while this technically reduces risk of non-TTC-related assault, it doesn’t speak to the larger issue. Nor does the TTC boasting of designated well-lit platforms with phones, much like universities’ focus on improving outdoor lighting. Though useful, the majority of assaults aren’t outdoors; they’re indoors, where people congregate. Research conducted by the London transit system found most assaults occur during peak travel, contrary to belief that late-night travel puts women at greatest risk.

The TTC has promised a better response. Other jurisdictions have beat them to it, including Boston, London and Edmonton, all which have implemented awareness campaigns. Transport for London’s 2015 “Report It to Stop It” video has had more than four million views and is credited with a 36 per cent increase in reporting unwanted sexual behaviour on the network, as well as a 40 per cent increase in arrests. Edmonton Transit introduced a “zero-tolerance” Safe Ride campaign which features posters listing inappropriate behaviours (groping, leering, sneaking photos, making unsolicited comments). It also instructs riders to call 911 or pull the passenger alarms—which, realistically, few will do at rush hour.

The TTC has promised a cellphone app so passengers who feel threatened or witness a crime can report it. This is quaint; most people travelling transit already have cellphones. As it now stands, women are forced into vigilante mode. A 23-year-old man was busted in New York in August after a woman posted a video on Facebook, saying he had touched her and masturbated on transit. This week #NotTheBetterWay, a Twitter riff on TTC’s “The Better Way” motto, included incidents of assault. Providing subway WiFi would be more useful, as would increased video surveillance and assurances that every complaint will be taken seriously.

Canada could also take a page from London, which bans past public transit sexual assault offenders. And there’s another solution the cash-strapped TTC and other transit operators don’t want to hear: building a system that doesn’t force people to travel in sardine conditions. For now, we need a shared word both women and men can shout if they are being assaulted or witness someone being bothered while travelling on transit. I propose “Creep!” though “criminal sexual predator” is more accurate. It just doesn’t have the same ring.

Correction: An earlier version of this post misidentified Transport for London.