How to catch a bear

If a fine Alsatian chef asks you to bring a freshly killed bear to cooking class, you hunt one 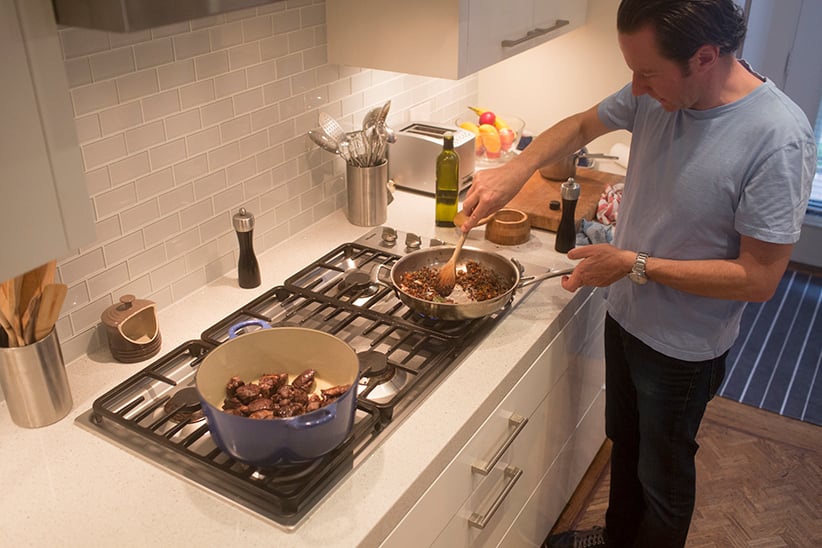 Even if you knew nothing of hunting, and your familiarity with the habits of bears was gleaned entirely from The Many Adventures of Winnie-the-Pooh, you would probably guess that the best way to lure one of these big, fierce beasts to their doom would be with a big pot of “hunny,” or possibly a glazed doughnut or two. And you would be right.

So I learned, deep in the woods near Sudbury, Ont., on the morning of Aug. 15—opening day of the fall bear-hunting season—when my friend and hunting guide, chef Marc Thuet, showed me how to bait an enticing bear trap. All the goods had been baked the day before at his patisserie, Petite Thuet: for starters, peach and blueberry Danish, and as pièce-de-résistance, a selection of their exceptionally fluffy beignets.

“Last year they weren’t crazy about my croissants,” Thuet admitted, in a whisper, as he arranged the pastries on the lid of a bear-feeding barrel. “It was upsetting. A little depressing, actually. But I think they’re going to love the apricot glaze on my Danoises. And I put extra doughnut sugar on the beignets . . . ” Thuet took a bite out of the last one, checking his handiwork. I understood—for I find his beignets quite irresistible, too. But it is what chef Thuet makes with bear meat that drew me to the mosquito-infested woods for my first crack at big-game hunting.

Allow me to explain. Chef Thuet is an expert charcutier. While his commercial line focuses on pork and foie gras, his private selection is heavy on wild game meats (which Canadian law prohibits him from selling). His bear repertoire includes a hind-leg ham, salt-cured like prosciutto and cold-smoked, a process that yields both supple texture and deep flavour. He also makes a bear-based pâté de champagne, and a richly seasoned saucisson sec that tastes like a classic hunter’s sausage. Once, he showed up for dinner with a package of thinly sliced air-dried bear loin, rather like the Swiss bündnerfleisch (we called ours “bëarderfleische”). Since then he has told me that I must try his bear-and-venison burgers, and that he would happily pass along his recipe for bear stew, which tastes “just like wild boar civet back in Alsace.”

Meanwhile, as I enjoy eating and cooking wild foods, this winter I decided to add hunting to my repertoire of fishing and foraging. I am at ease with being at the top of the food chain, and where my food comes from. So I took my hunter’s education and gun safety courses and got my licences. Then, after one unavailing go at the spring turkey hunt, the fall bear hunt came as unexpectedly the next season on the calendar. Rabbit or squirrel seemed a more sensible next step, or failing that, big game that doesn’t eat people. On the other hand, here was a great Alsatian chef willing to teach me how to make all these delicious things. All I had to do was to bring a freshly killed bear along to cooking class. The possibility existed that I might not relish the experience of the kill, but instead hate it, and find myself weighed down with remorse. Either way, I wanted to know. I had no choice but to seize the day: Carpe ursus, as it says on the Thuet coat of arms.

We were hunting at Lakeland Lodge, run by Bucky and Gail Olivier, in the bear-infested woods near Lake Wahnapitae. The lodge they run is intimate, and hands-on. Hunters gut, skin and butcher their own bears. They are also encouraged to scout their own bear stands, bait their own traps, and make their own assessments of the lay of the land.

The basic principle is that bears are itinerant, and will roam as far as 200 km to reach a reliable seasonal food source. But they undertake these wanderings along regular routes. So the lodge puts out barrels of food chained to trees on those paths, and builds small platforms some four or five metres up a tree overlooking them.

Step one is to put food in the barrels, and inspect them every day, tracking the ones that bears favour, and refilling them as needed. Around Lakeland Lodge, the process of acclimatizing local bears to their feeding stations begins in June. Or so Bucky told us on a tour of a half-dozen of his 30-odd baiting stations—which they fill with dry dog food, as what makes a healthy pup is also good for Pooh (even bears cannot live on dessert alone). “In the spring we brought in 20,000 lb.—about $8,000—but it pays off. It gives you a good hunt,” Bucky explained. “We can do everything else—good stands, good trails—but the baiting is everything.”

Of the six stands we visited, four had been visited by hungry bears the evening previous. It is not hard to tell which. Some hunters affix motion-activated infrared cameras to trees to track the bears’ comings and goings. Bucky did not seem to need one.“When did the bear come to this station?” he asked at one stand, pointing at the kibble scattered on the ground. “No idea,” I admitted, honestly. “The kibble’s dry,” he pointed out, patiently. “It was raining an hour ago. That bear just left.” Yikes.

Six hours later, at three o’clock, we were back. Not with food this time, but with rifles. On which front I had a small problem; I had never fired one before. And a practice shot was now out of the question, for it would scare the bears. “Just make sure you can see through the scope,” Thuet said to me, as he handed me a Browning Gold Medallion series 300 Magnum semiautomatic. I could. “OK—here’s the safety. Now you go!”

And that was that. He got back in his pickup truck to drive to another stand, and I trudged off alone down the footpath to mine. As I walked the path I reviewed the numbers I had researched earlier that week. Black bear population in Ontario: 100,000. Conclusion: they could spare one for my table. Number of fatal bear attacks on humans since Ontario records started in 1916: seven. Conclusion: I was highly unlikely to end up on one of theirs.

I crept forward as quietly as possible. I reached the stand, climbed the tree, and set up my chair. Then I went back to the feeding barrel, and unleashed a treat from Thuet: a bear “bomb,” a spray can filled with the scent of the urine of a sow in heat. I was to spray it around the barrel for 20 seconds. “But don’t get any on yourself,” he had cautioned, the reasoning obvious.

Naturally, the nozzle jammed and I got liquid all over my hands. Panicked, I washed them with the contents of my water bottle, then retreated to my tree stand and settled in. Millions of mosquitoes hovered. They bit my left ear. Slowly, quietly, I tugged on my mosquito netting, so they could not reach my flesh. They bit my right ear instead. I tugged. They got inside my jacket, up my back. An hour passed. A raven flew wheezily past, settled on a nearby branch, and then squawked loudly and flew away in a hurry.

I looked back to the bait barrel. There, a small bear was noiselessly circling. It looked too small to shoot, but I was not sure. I lifted the gun and wondered what the backfire was like, and whether it would knock me and my chair an inch or two backwards—all that was needed to topple me from my tiny, slippery perch. Then I wondered if the small bear had a mother. A big mother, say, coming up from behind—who might smell me, and decide that I would make a nice contribution to her pre-hibernation daily feed of 50,000 calories. My heart raced. Five minutes passed and the bear wandered off, alone.

Three hours later the light was fading, my legs were badly cramped, I was hungry, thirsty, needed to urinate, and had committed the rest of my life to inventing an insecticide that would wipe mosquitoes from the face of the Earth. And suddenly there it was: Godzilla, or King Kong, or something like that. In the dim light the bear looked absolutely enormous. It was alone. No cubs. I lifted the gun and looked through the scope and waited to see if it would present a flank, to allow for a lung shot—the fastest, surest way to kill. Five excruciating minutes passed—and then it turned sideways, and climbed up on the barrel.

That mournful wail brought on a pang of guilt. But it passed quickly, overtaken by adrenalin-fired exhilaration. Appetite would be next. First, there was work to do. Thuet helped me track the bear—and we discovered that my shot was perfect: in one flank and out the other, right through the lungs. But the bear was not quite as large I thought. Bigger than me, yes, but still just 156 lb., after it was gutted, a process Thuet demonstrated for me quickly, in the darkness. The next day back at camp, another hunter showed me how to skin it, and then Thuet broke it down into basic parts. At home in Toronto, I divided that up into two future hams, loin steaks and stewing cuts. Twenty-nine kilos, all told—and I have to finish it before next season starts. Dinner, anyone?