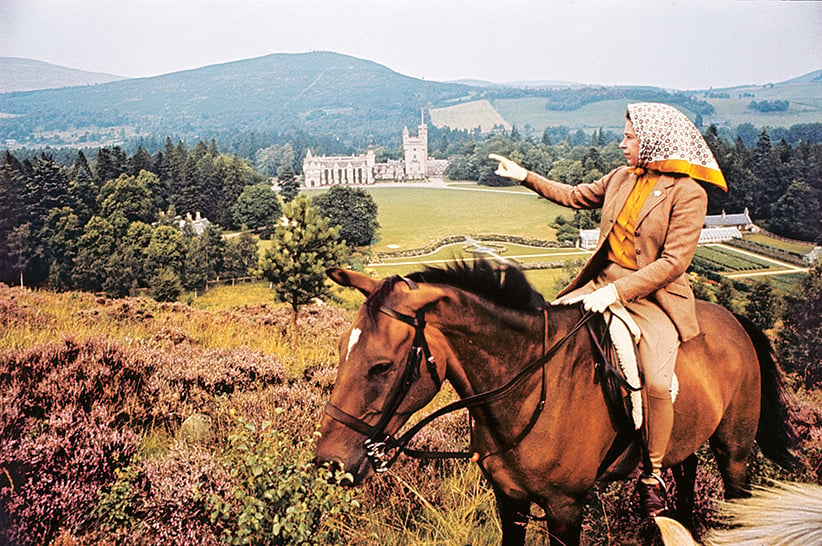 The Queen on horseback looking towards Balmoral Castle, Scotland in the distance during the Royal Family’s annual summer holiday in September 1971. Part of a series of photographs taken for use during the Silver Wedding Celebrations in 1972. (Lichfield/Getty Images)

If fitness is a better indicator than any other in predicting mortality, Queen Elizabeth II has, at 89, many years ahead of her. She long ago surpassed the longevity of the average British woman (for women born in 1926, life expectancy is 70.6 years), but she’s also mentally sharp and showing no signs of ditching her job. Her stamina is legendary.

At the state opening of the U.K. Parliament in May, she stepped down from a carriage wearing an evening dress and fur wrap, ascended a staircase, then donned a one-kilogram jewel-encrusted crown and the seven-kilo, seven-metre-long velvet Robe of State for a long walk to the throne, where she delivered her speech. She did it on a warm day made hotter by intense TV lights, her only assistance while walking a helping hand from Prince Philip.

How fit is the Queen? “At 89, she’s downright spry,” says Stuart Phillips, an exercise physiologist and kinesiology professor at McMaster University, who pegs her at the upper end of the fitness continuum. What’s her secret? Good genes? No doubt, though while her mother lived to 101, her father died at 55. As Phillips says, inheritance will only take you so far. Fitness requires constant work. Her choices in life offer clues to living well, and long.

1. Moderation in all things. The Queen’s weight has rarely fluctuated, she’s never been seen staggering out of a nightclub at 3 a.m., and she takes regular, planned holidays. So don’t eat too much, sit too much, party too hard or work 24/7. And don’t ever, ever smoke, adds Phillips. (Elizabeth’s father was a heavy smoker.)

2. Low-to-moderate levels of physical activity. Her Majesty is a believer in constant physical activity. Royal walkabouts have that name for a reason. She spends hours at a time on her feet at garden parties and investitures, unlike many desk-bound workers. On one day during the June state visit to Germany, she and Philip travelled to Frankfurt, visited a church, met local representatives, attended a lunch and met the public in the central square before returning to Berlin to spend even more time standing at an evening garden party.

The Queen is equally active in her off hours. While many like to burrow deep into a couch, remote or mouse in hand, she goes riding—superb for strengthening core muscles, says Phillips—or takes brisk walks with her corgis. It helps to have a spouse who is equally fit—at 94, her husband still participates in competitive carriage driving competitions.

3.    Be outdoors as much as possible. She spends a lot of time in the fresh air. Guests at Balmoral Castle in Scotland are warned that everyone spends much of the day outdoors, even in inclement weather.

4.    Have hobbies that involve mental and/or physical activity. The Queen is fortunate because her main hobbies, especially the breeding and racing of horses as well as dogs, involve No. 2 and No. 3.

5.    Take the stairs. Climbing stairs helps the core, as well as balance and overall body strength. She walks up and down staircases in historic buildings constantly, such as St. Paul’s Cathedral in London, rarely if ever holding onto the hand rail. Stair climbing is a form of higher-intensity exercise, which is a type of activity many neglect, Phillips notes. As a result, we lose our “top gear.”

6.    A routine. At 9 a.m. each morning, a bagpiper plays outside her windows. Then it’s off to work. That consistency leads to a greater self-efficacy for certain tasks, a fancy way of saying, “The more you do it, the better you get at doing it,” says Phillips.

7.    Plenty of sleep. New research indicates that shortened or poor-quality sleep has a staggering effect on health. In the lead-up to the birth of Kate’s second child, the media were informed that if it happened after 10 p.m, no announcement would be made until 8 a.m the next morning. Why? The Queen would be asleep.

8. Keep mentally active. Every day, she plows through confidential state documents sent to her in red leather cases, has weekly meetings with her prime minister, and regular briefings on her 15 other realms, including Canada. Reportedly, she takes only Christmas Day off. For the Queen, there’s no such thing as retirement; she considers being monarch a job for life, and it’s a vocation she clearly enjoys. Still, she is slowing down a bit, though that amounted to nearly 400 engagements last year.

9. Be practical. Limitations are all still relative: When horses proved to be too tall for her, she switched to riding short, stolid fell ponies. In 2014, she decided to bow out of one part of a event that involved descending a steep, narrow staircase at an ancient abbey while wearing a floor-length robe, complete with train, over an evening gown.

10. Enjoy life. The Queen drinks a Dubonnet and gin each day. There are some indulgences that even a monarch isn’t prepared to give up.