How to look at the severed forearm of a saint

As St. Francis Xavier's arm tours Canada this month, an expert talks about the long tradition of gazing at relics 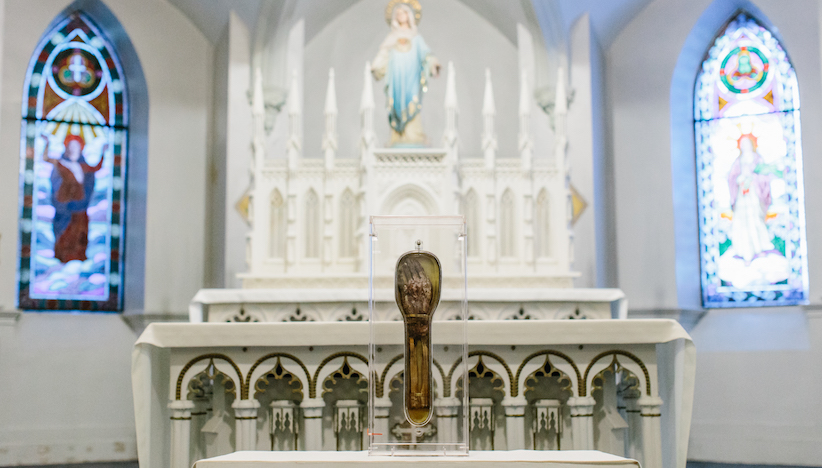 There’s no use sidestepping the obvious: a partly preserved limb severed from a corpse more than 400 years old is not a pretty sight. Yet tens of thousands of devout Catholics and the merely curious are expected to gaze upon the right arm of St. Francis Xavier as it tours Canada this month.

The missionary died in China in 1552. His tomb is in Goa, India, but his forearm was cut off in 1614 and sent to Rome. It’s usually on display there at the Church of the Gesù, in a Baroque chapel decorated with coloured marble, stucco reliefs and painted scenes from the saint’s life. The arm has been brought to Canada for a 14-city tour by the Archdiocese of Ottawa, the Jesuits, and the group Catholic Christian Outreach.

On its travels in Canada, the relic remains inside its usual arm-shaped, silver-and-glass case, called a reliquary, which is in turn displayed inside a utilitarian clear-plastic box. For insights into how to think about it all, I called Cynthia Hahn, an art history professor at Hunter College and the Graduate Center of the City University of New York, and author, most recently, of The Reliquary Effect: Enshrining the Sacred Object, published last year by University of Chicago Press.

Q: Where do relics and reliquaries fit in art history?

A: In the Middle Ages it’s very clear that reliquaries were some of the most important objects that could be made and could be owned and could be possessed by a church or displayed by a church. They were willing to put huge amounts of money into making them. There are examples where the reliquary is more expensive than the building itself.

Q: Is the relic part of a work of art then, or is it separate from the reliquary?

A: It certainly isn’t separate. It can be separated, though. Most of the reliquaries in museum collections now are empty. But the reliquary is completely contingent upon the relic, in the sense that it wouldn’t exist at all without the relic. For viewers and beholders, and people that use these things, they have a certain functionality. People with a kind of purist idea of art don’t think that’s right.

Q: Are there some reliquaries that stand out for you as being particularly beautiful or powerful?

A: Well, the no longer surviving reliquary ensemble from the Sainte-Chapelle in Paris was truly extraordinary. There are lots of drawings and paintings of it from before it was destroyed during the French Revolution. It was on a giant, turnable platform that presented like a church from one side and then it had curtains on the other side that could be swept inside to reveal of the powerful relics inside of it.

This was raised above the main altar of the church, so that anyone walking in to this chapel would immediately see this relic ensemble in front and high at the eastern end of the church. Everything about one of the most beautiful pieces of architecture in the world was it was built and predicated on displaying these relics.

Q: Wasn’t a thorn from the biblical crown of thorns supposed to be among those relics?

A: Correct. That was one of the most famous relics. In fact, one of the reliquaries in this display unit was a crown-like thing made of crystal with gems and gold that included what they said was the whole crown of thorns. The French King had his power and some sense through that. 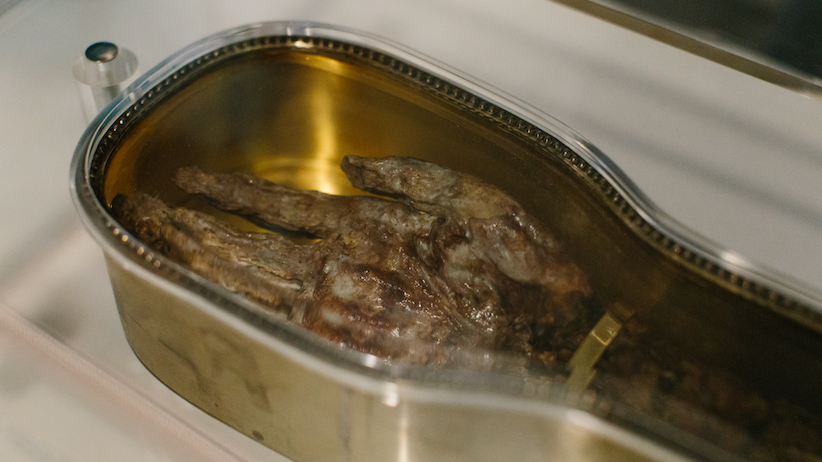 Q: Many Canadians will find it weird that St. Francis Xavier’s arm is touring here. Is this an unusual sort of relic?

A: They’re so useful in terms of the performance issues, in masses and processions and so forth. You take an arm reliquary into a procession and then you use it to bless the crowd.

Q: The Jesuits emphasize that St. Francis Xavier baptized hundreds of thousands of people in Asia as a missionary with the very arm that’s now on tour.

A: That’s terrific. I love it. There are multiple texts in the Bible about Christ as the head of the church and the saints as his limbs.

Q: How did relics in reliquaries work historically for those who believed in them?

A: Insofar as the church understands how relics work, and from the tidbits that we get from very important writers in the early Middle Ages, relics were believed to represent something that was both on heaven and on Earth. When you look at a relic, you are directly communing with heaven because that saint is at the side of Christ in the court of heaven, and he’s left a bit of his body or a bit of something else here on Earth for you to have access to.

Q: I would guess Canadians coming to see this relic would fall into two categories, those who believe in it on some level and those who don’t. How do you think non-believers should approach it?

A: Well, I myself am not a believer. I certainly wouldn’t imagine that it would have missionary potential, in the sense that it is not convincing, especially in the way they display them now. In the early Middle Ages, they were covered. You did not see grisly bones. You saw gold and gems and spectacular objects. Only as we start to get to about the 13th century do they start using something called rock crystal all the time—clear, of course, but not 100-per-cent clear for the most part. It still had a mysterious quality to it. You’re not necessarily trying to see it.

Q: Photographs of St. Francis Xavier’s arm at its home church in in Rome show it in an elaborately decorated setting. Listening to you makes me think it might be better to visit it there than see it behind clear plastic in the plainer silver-and-glass reliquary it’s travelling inside.

A: Well, I’ve totally convinced you of my point of view then. That’s the reliquary effect. You’ve got it.