How Iain Reid made himself into a writer of philosophical suspense 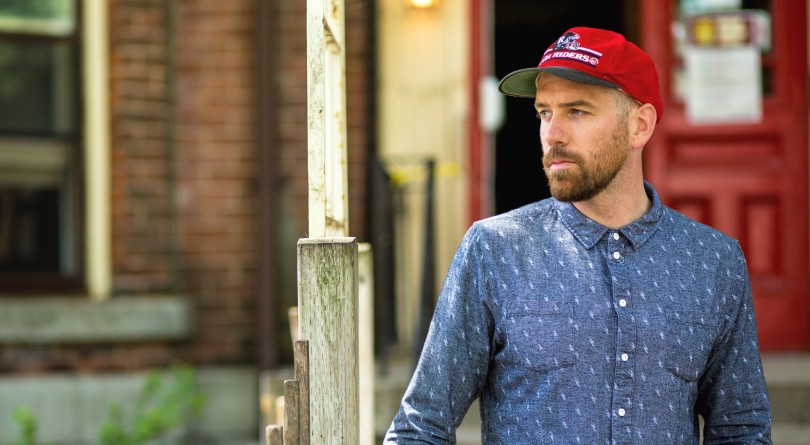 Iain Reid spends a lot of time at his family’s farm on the outskirts of Ottawa. His parents bought it more than 30 years ago after returning to Canada from England, where they had rented a small dairy cottage on a larger farm while his father was finishing a Ph.D. in English literature. “They loved the atmosphere of the farm, so when they got back to Canada, they decided they’d like to find somewhere in the country,” says Reid, 37, who in August is publishing his fourth book and second novel, Foe. It comes in the wake of his successful 2016 fiction debut, I’m Thinking of Ending Things, which is being adapted into a Netflix movie written and directed by Charlie Kaufman (Being John Malkovich, Eternal Sunshine of the Spotless Mind). The “interesting rural setting” of the farm, coupled with growing up in an environment where talking about books around the dinner table was normal—his father became a high school English teacher as well as a university lecturer, and his mother and older sister were also keen readers—shaped Reid’s love of stories. But it wasn’t until he graduated from Queen’s University, where he studied philosophy, history and English, that he tried his hand at writing.

Initially, Reid thought he’d go on to grad school to continue exploring the philosophical ideas he was interested in. But he decided to take a year off and move to Toronto after graduation. While working a variety of jobs—including call centre employee, restaurant server, intramural basketball coach and doing home renovations with a friend—he started writing fiction in his free time. “I was really excited by the possibility of sitting in a room for a few hours quietly and working on a story, for weeks or months or however long it would take. I loved it.” In the early days, Reid says, he didn’t have professional writing ambitions. But he continued to write and eventually started sending his short fiction to journals. He says the pieces were “promptly rejected,” which he now recognizes was warranted. Then, over the course of several years in his early to mid-20s, he transitioned into writing non-fiction for newspapers, magazines and CBC Radio. For a while, he had a books column in the National Post.

READ MORE: The 15 books you should read this summer

In time, Reid wrote his first book, One Bird’s Choice: A Year in the Life of an Overeducated, Underemployed Twenty-Something Who Moves Back Home, which came out in 2010. He sent a very early version of the book (in the form of an essay collection) to Samantha Haywood of the Transatlantic Agency, now his agent, who says she “fell in love with his writing immediately.” His second book, The Truth About Luck: What I Learned on My Road Trip With Grandma, came out three years later. Both are warmly humorous memoirs about Reid’s life with his family. When his first book came out, Reid says he was still worried about money, doing freelance work in addition to other odd jobs, but also “so surprised and excited that I was actually able to get a book published.” Then, in 2015, he won the RBC Taylor Emerging Writer Award, which recognizes Canadian literary non-fiction and carries a prize of $10,000.

After The Truth About Luck, Reid felt emboldened to try his hand at fiction again, which as a reader he was always more interested in. He remembers discussing the idea for what would become his first novel, I’m Thinking of Ending Things, with Haywood. She was enthusiastic and told him to go for it, he says, which gave him the confidence to spend about three years writing the novel even as he recognized that, with no fiction cred behind him, “there was no guarantee anybody was going to publish it.” He likens the process to going to medical school but applying only after you’ve done all the work, and says that if the book never found a publisher, he would have had to have found another job but would have continued to write, “if only for myself.”

He needn’t have worried, though. Ending Things sold in a two-book deal with Foe, and both also sold in other countries. Besides being picked up by Netflix, Ending Things was a critical success and a bestseller, and has been translated into more than a dozen languages. Anonymous Content, the company that made the HBO show True Detective and the movie Spotlight, has acquired the rights to Foe. Reid is acting as co-producer on both projects. All of this is particularly thrilling for him because, he says, he “doesn’t lead a very adventurous life.”

Ending Things and Foe aren’t easy to categorize. Reid simply considers them fiction. His publisher calls them philosophical suspense. They’re definitely page-turners, with elements of the mysterious and moments of terror. You want to keep reading to figure out what exactly is going on, but peppered throughout are big ideas, too.

In different ways, the two works of fiction explore questions of identity and relationships; Reid says the ideas in the novels are more personal to him than those in the memoirs. Both books are set in rural environments, and both explore how well we know ourselves and our intimates. In Foe, we experience the inner workings of a marriage, Henrietta and Junior’s, but their story is cocooned by elements of science fiction and the novel’s future setting. The writing itself is spare, measured and layered. “His novels can be terrifying in parts and extremely disturbing, and yet he is probably the most charming, affable, kind, sincere, considerate, down-to-earth person,” says Haywood. “There is this incredible contrast.”

Reid is now in the idea and research phase of a new novel. When he isn’t writing, he enjoys playing basketball—he was on the university team at Queen’s—as well as listening to music, going to the cinema and, more recently, cooking. Every morning he goes for a walk, which is good for him both physically and mentally, he says. He still spends a fair bit of time at the family farm, and when he’s there he talks to the sheep when he’s at a crossroads with his work. Once he’s bribed the sheep with hay, Reid notes, they “make very good listeners.”