As a child he was outdoorsy and a creative woodworker. Fit and ‘strong as an ox,’ he fell in love with his work as a tree faller. 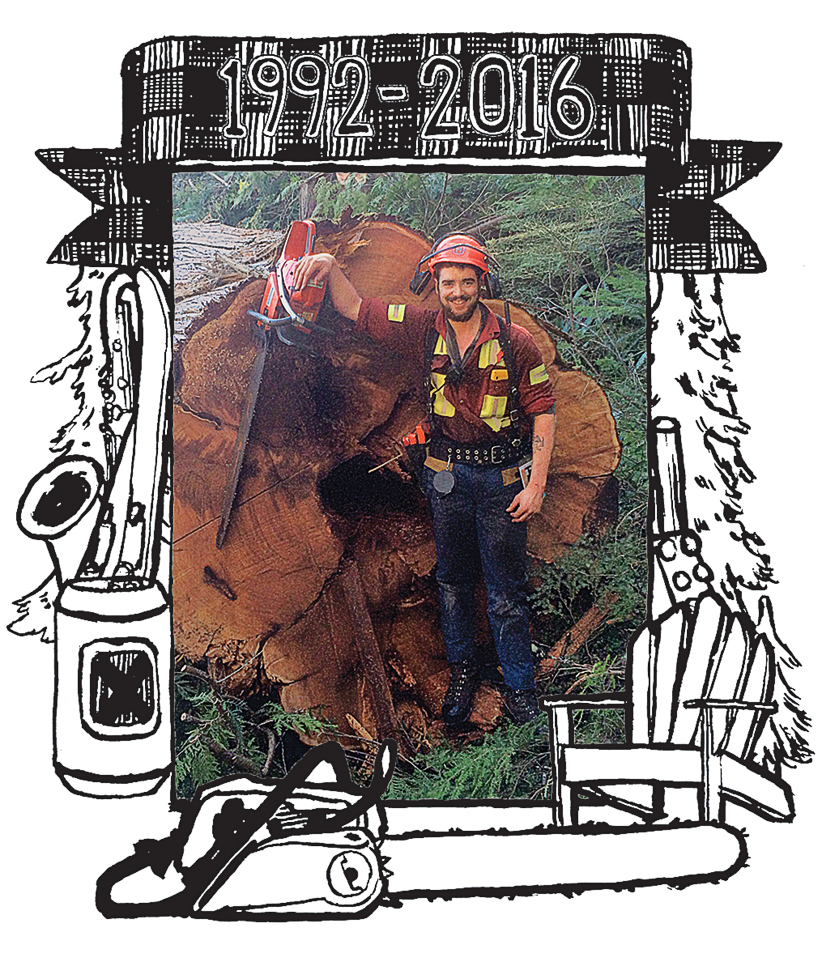 Ian Robert Lawson was born in Victoria on Dec. 20, 1992, to Gary, who worked in forestry management, and Fiona, a middle-school teacher. A younger brother, Evan, followed in 1994.

Ian started out life big—nine pounds, 10 ounces and 23 inches long—and grew like a sequoia. By his twenties he was a rugged six foot four and 240 lb. Friends called his size-14 feet “skis.” The Lawsons lived in a number of small isolated B.C. communities—Sandspit on Haida Gwaii and Port McNeill—before settling in Campbell River on Vancouver Island.

Ian was an active, creative child. He loved to build things, first from Lego, then later, in his dad’s basement workshop, from wood. He’d bug his dad for using screws instead of dowels, as he did. Ian was so good at making bowls, tables and other items that in Grade 12 at Timberline Secondary School he came second in a Skills Canada woodworking competition. As a teen, people commissioned him to build tables and he made extra cash selling his own Adirondack chairs. Gary and Fiona read to both sons from a young age. Though Ian was passionately outdoorsy, he gobbled up books by such writers as Con Iggulden and fantasy writers such as George R.R. Martin.

“Ian,” says his father, “was just one of those people that when he got into something, he went full tilt and was going to be really good at it.” He played guitar and saxophone in the school marching and jazz bands. When the Lawsons put Ian and Evan into the ski program at Mount Washington Ski Club from grades 8 to 12, Ian became a daredevil. “I have lots of pictures of him jumping off things that would scare the heck out of me,” says Gary. He never learned to turn well, but preferred speeding straight downhill.

Ian grew up in a forestry family. He took his first helicopter ride to a logging site at age two and had his own Fisher-Price chainsaw. He even created an imaginary company called Big Ox Logging with his brother and playmates. Besides his dad, Ian’s grandfather, Robert Lawson (Grumps they called him) worked in forestry.

After high school, where he made the honour roll and won scholarships, Ian seemed destined to follow his father’s career path: For a time he studied forestry management at Vancouver Island University. During his first two years at VIU, he spent the summers working as a forestry engineer, where he got a taste of camp life and saw the rugged, sometimes dangerous work of fallers, who can make $600 or more a day cutting down the big timber on B.C.’s coasts.

He quit university to be a ski bum in Whistler, but after running out of money sooner than he expected, Ian worked 19 months as a rigger for a heli-logging outfit. Then, just before his 21st birthday, he completed a fallers training program. He became a part of a band-of-brothers in red flannel and orange helmets, fallers who called themselves “the Lost Boys.” They were a tight, loyal group of friends hooked on the spectacular scenery and adrenalin rush of felling giant cedars and other trees. Ian loved his Lucky Lager beer, friends and family and, says Evan, “really, really loved his job.”

Ian’s parents worried about his decision to be a faller. His dad knew the dangers of the job. So did Ian. On his forearm Ian sported his only tattoo—an image of a crosscut saw, a tree trunk, the date 1990-2015 and the word “Knuckles.” It was the nickname of a friend who died in a falling accident last year. That, says Gary, “really shook Ian up.” His parents suggested Ian consider a safer line of forestry. “But he was fully committed to being a faller,” says Gary.

By all accounts he was a very good one. Ian had a “big goofy grin, was as strong as an ox, and super fit,” says one fellow logger—important attributes for a job requiring the equivalent of several-kilometre-long, steep hikes every day. Crews are often helicoptered or hike in to a new cut block and must first clear small areas to make wooden helipads on the mountainside to ferry in equipment and crews. Ian was also known for his high quality helipad constructions.

This month, Ian’s crew, usually about 10 guys, was heli-logging near Zeballos, a tiny village on Vancouver Island’s northwest coast. On Sept. 11 Ian was cutting a “snag,” a partially rotten and unstable tree, to make it safer for him to cut other trees nearby. The tree collapsed in an unexpected direction, part of it striking and instantly killing him. He was 23.