In denial about the Doomsday Clock? You're not alone.

There's something deeply untrustworthy about a clock that always reads past 11:30 p.m. 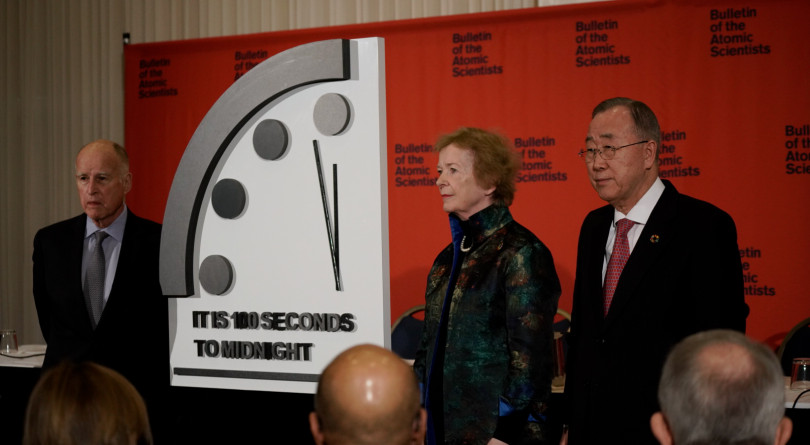 A bright sun lurches towards the horizon and gravity glitches. I’m on a grassy hilltop next to a faceless companion. We are suddenly weightless. I think, “Well, that must be the Earth off its axis.”

Then I wake up.

Next I’m on a mid-rise rooftop. Fireballs streak across the sky, casting orange light across a burning city. This has got to be the end.

But I wake up.

Maybe my apocalypse dreams are a self-preservation thing. When the mushroom clouds appear or my city is quarantined, I’ll be thinking, “I’ve seen worse…”

The “Doomsday Clock” sounds like a comic book weapon. Today it reads 100 seconds to midnight.

The Bulletin of Atomic Scientists—whom I imagine as a troupe of dishevelled heroes in long coats, storming out of a lab led by Doc Brown of Back to the Future fame—updated the position of the clock’s analog hands in a news release Thursday addressed to “leaders and citizens of the world.”

We lost 20 seconds in the past year, by the measure of this group of experts, among them 13 Nobel Laureates.

RELATED: Was Armageddon always this complicated?

Last year’s update had the clock stopped at 11:58 p.m., as close to midnight as in 1953, when the Soviet Union and United States were poised for mutually assured destruction. In 2020 the threat of “civilization-ending nuclear war” remains “a genuine possibility,” the scientists warn. But not necessarily on purpose. Maybe due to a blunder or simple miscommunication.

Where could they have gotten that idea?

Never mind that major indicators for human quality of life—poverty, literacy, child mortality—have seen steady improvement over the past century.

If you accept that nuclear weapons and climate change are the chief potential causes of widespread destruction, as the Bulletin does, and that the hollowing-out of international institutions, “frenzied” progress in artificial intelligence and increasingly-sophisticated information warfare are threat multipliers hurtling us towards disaster, then we should be alarmed.

But it’s not too late, says a wild-eyed Doc Brown. We can still turn back the clock.

Trouble is, it’s sort of difficult to imagine global collective action these days. Australia has recently seen a hellscape worse than the one my nocturnal imagination conjured. China is reportedly mass-brainwashing Muslims in concentration camps. The Hindu nationalist government of the world’s largest democracy appears to be committing history’s largest disenfranchisement of voters. Meanwhile, the president of the United States is facing an impeachment trial. Nothing to see here.

Today’s threats, even those that feel far-away, are no less real than yesterday’s. The “ticking” isn’t any quieter just because we aren’t building bomb shelters in our yards.

RELATED: After the apocalypse

But how does the modern human cope with this? Knowing we might ultimately contract some coronavirus, anyway, those who aren’t directly affected by such crises can opt to scroll past them, and look at puppies, and mourn the death of a fictional peanut, and argue about the patriotism of doughnuts. And speaking of doughnuts, we can spend some time poking holes in things.

Because, hear me out. There’s something deeply untrustworthy about a clock that always reads past 11:30 p.m. A clock that ticks this slowly, stops this often and is supposedly built to self-destruct is at best a very badly-constructed clock. Do these watchmakers take their cues from Iron Maiden, whose song “Two Minutes to Midnight” is six minutes long?

Don’t get me started on why it’s a bad idea to frame a countdown to midnight as a terrifying thing, and do not bring up Cinderella. I hate the hype of New Year’s Eve as much as the next person, but “100 seconds to midnight” sounds more like a cue for an annoying partygoer than it does a warning about the world’s future.

For all the doom-and-gloom of the Bulletin’s annual spiels—and for all the accurate points they make about why we live in a dangerous time—they are hard to trust. Some of their direst warnings have not been borne out, and as others have pointed out, the clock was fully seven minutes away from midnight when the Cuban Missile Crisis broke out in 1962.

The farthest away from midnight we have ever been, per the Bulletin, was 17 minutes, and that was at the end of the Cold War in 1991.

What I’m trying to say is life is a little breezier when you’re in denial.

RELATED: After a period of high anxiety, it’s time for patience on North Korea

Whether or not those who do pay attention can agree on what the threats are, or how to deal with them, something’s decidedly off with the Bulletin’s assertion, repeated for the second year in a row, that our planet’s proximity to annihilation is a “new abnormal.”

Show me a generation that hasn’t felt anxious about the world or a nation that hasn’t worried about, or engaged in, conflict. It’s part of being human. For that matter, to measure this anxiety with a “doomsday clock” has been par for the course for more than 70 years.

Surrounded by modern comforts, many of us still escape from a complicated world by burying our noses in comic books, or watching old science fiction movies, or, if you’re me, analyzing our own dreams of Armageddon. And maybe these fictions make us feel readier to face an alien invasion, or a zombie takeover, or the nuclear winter scientists warn us is still around the corner.

Are we ready, though, to put on our coats, follow Doc Brown out the door and hit the streets crusading for the kind of political will he’s saying we need, to survive threats that many of us don’t even believe are real?

We should probably sleep on that.