The inside history of Canada's opioid crisis

Canada is in the midst of an epidemic of opioid use and abuse. How did we get here?

TORONTO – Canada is in the midst of an epidemic of opioid use and abuse – involving both prescription and illicit forms of the potent narcotics – that shows no signs of abating and has led to an explosion of fatal overdoses.

So pervasive is the problem that it has become part of the Canadian consciousness and left doctors, public health officials and politicians scrambling to find solutions to contain the crisis.

Canadians remain the second highest per-capita consumers of opioids in the world, after Americans. But while U.S. use is beginning to decline, Canada’s numbers keep rising, according to the International Narcotic Control Board, which monitors countries’ prescribing levels.

“We doubt very much that it has to do with Canadians being different, having more pain than people elsewhere in the world. We think it probably has to do with how we’ve been programmed to prescribe,” says Dr. Jamie Meuser, executive director of professional development and practice for the College of Family Physicians of Canada.

“There’s virtually no doubt that prescribing in Canada has resulted in more opioid medications being on the street in Canadian communities than in comparable places in the world.”

But just how did we get here?

Opioids have been used therapeutically and recreationally for thousands of years, starting with Persian poppy-derived opium that both Hippocrates and Galen praised for its healing effects. Even famed Canadian-born physician William Osler (1849-1919) – no lover of pharmaceuticals – hailed opium as “God’s own medicine.”

With the isolation and later synthesis of some of opium’s chemical properties beginning in the early 19th century, medicinal use of opioids like morphine, codeine, laudanum and heroin became widespread, as did cases of addiction to those easily purchased drugs.

Synthetic opioids, such as oxycodone, were introduced to the prescription market from the 1950s onward, followed by slow-release formulations of a number of the drugs in the 1990s and early 2000s, which doctors began embracing for the treatment of chronic pain. 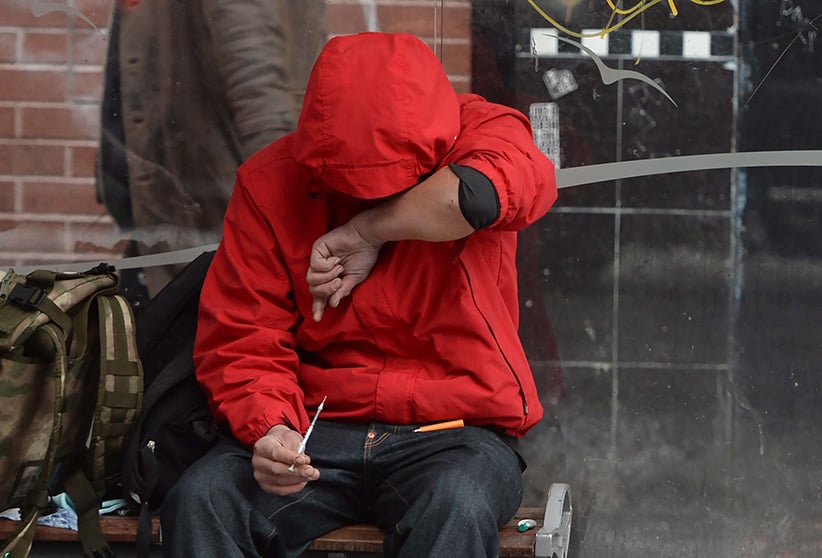 A man holds a needle after injecting himself at a bus shelter in Vancouver’s Downtown Eastside, Monday, Dec.19, 2016. (Jonathan Hayward/CP)

Among them were the fentanyl patch, hydromorphone and OxyContin, the latter made by U.S.-based Purdue Pharma, which aggressively marketed its product to practising physicians and medical school students as a highly effective painkiller “without unacceptable side-effects” – including addiction.

Prescription numbers soared – in Canada, the U.S. and elsewhere – as did growing reports of addictions and overdose deaths.

Then in May 2007, the truth about OxyContin was revealed when Purdue and three of its top executives settled U.S. criminal and civil charges for the company’s deceptive promotion of the medication.

Purdue agreed to pay US$634.5-million in fines, acknowledging that it had, “fraudulently and misleadingly marketed OxyContin as less addictive, less subject to abuse and less likely to cause withdrawal symptoms than other pain medications.”

Still, today’s opioid crisis can’t be linked solely to Purdue and its purported wonder drug OxyContin, suggests Benedikt Fischer, a senior scientist at the Centre for Addiction and Mental Health in Toronto.

“There were a whole lot of other opioids around … which were broadly accepted as a quick and easy and effective fix for pain … and were massively prescribed to a lot of people in high quantities and for long durations,” says Fischer.

While the use of opioids to manage chronic pain is poorly supported by scientific evidence, many doctors continue to prescribe the powerful medications, often because they don’t see other options for easing patients’ suffering, he says.

In 2012, partly in response to widespread diversion of OxyContin to recreational users with devastating results – some indigenous communities, for instance, reported that almost their entire populations were addicted – Purdue pulled the drug from the market as its patent was about to expire and replaced it with OxyNeo, a crush-proof pill that couldn’t be snorted, smoked or injected for an instant high.

Despite its new formulation, OxyNeo is still highly addictive, and several provincial governments have moved to restrict coverage under their publicly funded drug plans. Ontario and B.C., for example, have delisted OxyNeo, other than for exceptional use. As of Jan. 1, Ontario also stopped paying for any high-dose opioid that exceeds the equivalent of 200 milligrams of morphine per day.

Since 2012, prescriptions for oxycodone have been falling – from almost 2.13 million that year to less than 1.84 million in 2016, according to estimates from the pharmaceutical sales-tracking company QuintilesIMS. But other opioids soon took up the slack. For instance, retail pharmacies dispensed more than 4.76 million prescriptions of hydromorphone last year, up from just over three million four years earlier.

None of the above figures include prescriptions from hospitals or other medical institutions.

“Overall, I don’t see a lot of evidence that the generous prescribing and dispensing of opioids have really been reduced dramatically, despite our knowledge that we’ve really overdone this,” Fischer says.

The College of Family Physicians of Canada is trying to tackle the problem at the educational level, joining with several other professional groups – among them the Canadian Medical Association and the Royal College of Physicians and Surgeons – “to look at what education needs there are around this and what we can do to fill them,” says Meuser.

Canada’s 17 medical schools are also grappling with the issue, with some revamping their courses on pain control to stress to the country’s future doctors the dangers of opioids and alternatives for treating patients.

Governments and public health bodies are also trying to put the brakes on indiscriminate prescribing. The U.S. Centers for Disease Control issued new guidelines a year ago, advising doctors to first try non-drug therapies like physiotherapy for chronic pain and initiating opioids only in low doses for a short duration.

RELATED: Fentanyl in Vancouver: Death, death. Day in, day out.

Draft guidelines for Canadian doctors, developed at McMaster University in Hamilton, suggest restricting opioids to the equivalent of 50 to 90 milligrams of morphine per day, except in “rare circumstances,” putting them in line with the CDC’s advice. The previous guidelines, from 2010, limited the upper daily dose to 200 milligrams. The final recommendations are expected next month.

Meanwhile, a new threat has sent the opioid crisis into overdrive.

Illicit fentanyl pills from overseas have flooded onto the black market, helping to fuel a rash of overdose deaths, particularly in B.C. and Alberta. Fentanyl is 100 times more potent than morphine and up to 50 times stronger than heroin – making it potentially deadly in very small doses.

Dr. David Juurlink, head of clinical pharmacology and toxicology at Sunnybrook Health Sciences Centre in Toronto, calls the fentanyl crisis “an epidemic within an epidemic.”

“The fentanyl epidemic is a response to the generation and enormous market for opioids that has always existed but was never as large as it currently is,” he says.

“When the demand is so high and there’s so much money to be made, when you try to restrain the supply side – you reformulate OxyContin into a tamper-resistant product, you close down pill mills and you abruptly reduce opioid prescribing – people will need something.

“And to avoid withdrawal, they’ll turn to whatever they can get their hands on.”

Fischer says two decades of over-prescribing, coupled with the growing illicit trade, has created a dilemma for those trying to curtail opioid use among both chronic pain patients and those who seek the narcotics to get high.

“The challenge, of course, is we have to deal with the hundreds of thousands of people who have become addicted and dependent and who are abusing these drugs on a daily basis or putting themselves at risk of overdose.”

Reining in opioid use may prevent more people becoming addicted in the future, says Fischer, who has long called for a national strategy to deal with the epidemic.

“But at the same time, you may create an adverse double-jeopardy effect where you may make things worse for all those people who are hooked on these drugs and are already procuring them non-medically.”

With files from Aleksandra Sagan in Toronto.