Max Domi dekes away from his dad's tough-guy reputation 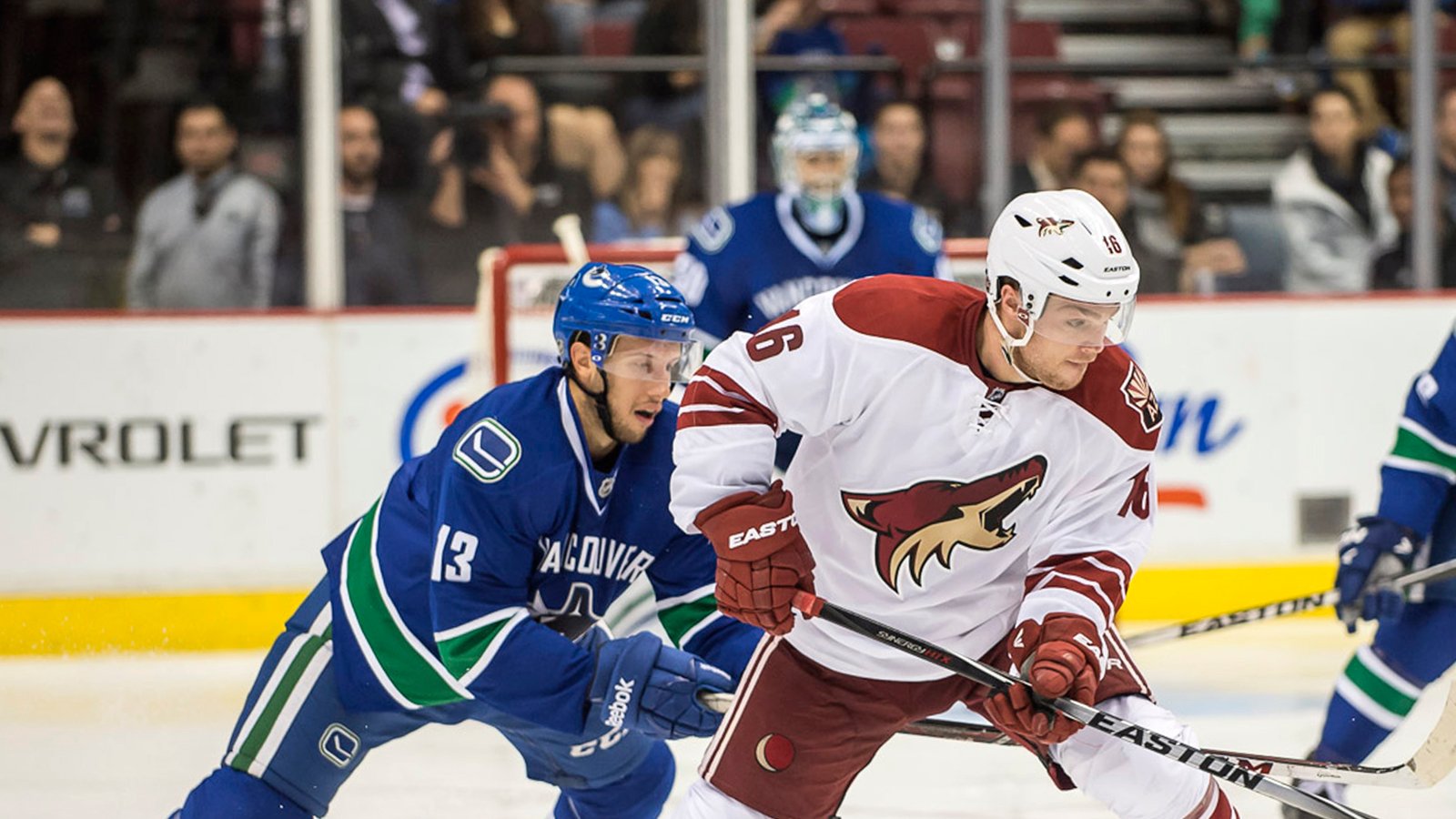 Max Domi has his eyes on the prize—a coveted roster spot as a rookie—in Arizona. (Photograph by Christopher J. Morris)

This Domi uses his hands for playmaking, not pummelling. This Domi is a pure scorer who hasn’t logged a single hockey fight. “Because of the last name, people think he’s like Tie,” says Dave Tippett, coach of the newly rechristened Arizona Coyotes. Nothing, Tippett says, could be further from the truth. Tie Domi was all fists and growl. Max, his only son, punched his pro ticket with soft hands and offensive flair. As the puck drops on the 2014-15 season, the 19-year-old is an odds-on favourite to crack Arizona’s roster.

The Coyotes, since losing their top scorer, Radim Vrbata, to free agency last spring, have been “questioning how we’re going to score,” general manager Don Maloney said in a rare, frank moment. “That,” he adds, “is what Max does.” Last season, Arizona’s first-round draft pick put up 93 points in 61 games with the Ontario Hockey League’s London Knights.

So all eyes were on Domi, when he landed in Vancouver this week, for an exhibition game against the Canucks. He didn’t disappoint. In his first shift, he came flying off the Coyotes’ bench, beating veteran Canuck Chris Higgins with a deft, little check. Rather than trying to rush the play forward, Domi did the opposite: passing the puck back to his defence, slowing down the play, allowing Arizona time to regroup and set up in Vancouver’s end. When, toward the end of the shift, the Coyotes bobbled the puck, Domi stole it right back from Vancouver defenceman Luca Sbisa, and quickly passed it to Martin Erat, who fired it on Vancouver’s Ryan Miller. The pretty setup in the Canuck crease gave the Coyotes their first real scoring chance of the night.

The first thing you notice about Domi is neither his blinding speed nor the evident hockey smarts. It’s a remarkable poise, unusual in such a young man. It’s the kind of confidence and self-possession that allows him to gently rib his new captain, Shane Doan, whom he likes to remind played his first NHL season the year Domi was born. It’s an ease that comes, perhaps, from growing up among the game’s blinding lights and demigods. Former Leaf Mats Sundin and Penguin great Mario Lemieux remain close pals of his dad’s. “When you’re that young,” says Max Domi, “you have no idea what it all means—how different it is from other people’s experiences.”

Doan says it’s given him an “innate understanding of the hierarchy” of the dressing room. “A huge part of being a young guy is having the ability to fit into a room, and he does it so well.” But with that hockey pedigree comes “considerably more pressure, more tension, more expectation,” Doan adds, his voice dropping to a whisper, as Domi undresses nearby. “If you get drafted in the first round and your dad’s an NHLer who played as long as Tie did,” he says, “you have to make it, you have to shine.”

That shouldn’t be a problem for Domi. He’s been lighting up score sheets and scouting reports since his minor hockey days with Toronto’s Don Mills Flyers. In an early shift in Vancouver, Domi, paired off against the Sedin twins, used his strong core to hold Henrik off with his left hip, protecting the puck close to his body before firing it behind the net with a swiping backhand pass. Later, Domi, who has the same, tank-like body as his dad, patiently stood his ground in Vancouver’s end, protecting the puck between his feet, taking a hard slash from a frustrated Sbisa, who was penalized for the play, the second penalty Domi drew on the night. The Canucks were having trouble keeping tabs on the Arizona sparkplug. He forced them to chase him.

Given Domi’s height, listed at a nose-stretching five-foot-ten, he’s “unbelievably tough,” says Doan. “You can’t knock him off the puck”—thanks largely to his 200 lb., most of which he packs below his waist. Domi’s height isn’t his only impediment. He’s been diagnosed with Type 1 diabetes, the inspiration behind his No. 16, which honours the Philadelphia great Bobby Clarke, a fellow diabetic.

Still, Domi’s game shows signs of youth. In the third period he caught a beautiful, hard pass just inside the Canucks’ blue line. Rather than shoot, he moved in on Miller, then attempted to float a pass between his legs, which Henrik Sedin easily batted away. The OHL is a developmental league, says Tippett. Mistakes are frequent. You can redeem yourself. But in the NHL, these are the mistakes that get you sent down to the minors. “That’s how it’s got to be,” says Tippett. “You have to hold guys accountable because it’s a winning business. Coaches have to know they can count on their guys in every shift, in every zone.” In other words, the pressure is on. And Domi knows it. He didn’t make the mistake twice. In his next zone entry, he crossed the blue line with the puck, then fired a wrister, hard and on target.

Domi might look at ease playing on Arizona’s power play, but actually, he’s still astonished by the speed of play. “You can’t even compare the two leagues,” he says, in explaining the mammoth leap between the OHL and the NHL. “Everything happens so much faster. And everyone is always in the right spot. So you have to be in the right spot, too. If not, you stand out—in a bad way.”

Max remembers his father standing out, not always in a good way. Tie, who logged 300 career fights and more penalty minutes than almost any NHLer, never had it easy. But he loved the game, and found a way to keep playing as a pro, his son says, with evident pride. Max knows he wouldn’t be lacing up for Arizona without his dad. “He’s my No. 1 fan. He’s helped me since I was a young kid, both as a hockey player and a person. He’s the reason I’m here today.”