Is satire still possible in an era of fake news?

Will the reality of Trump and fake news bubble make satire impossible?

By The Associated Press February 1, 2017 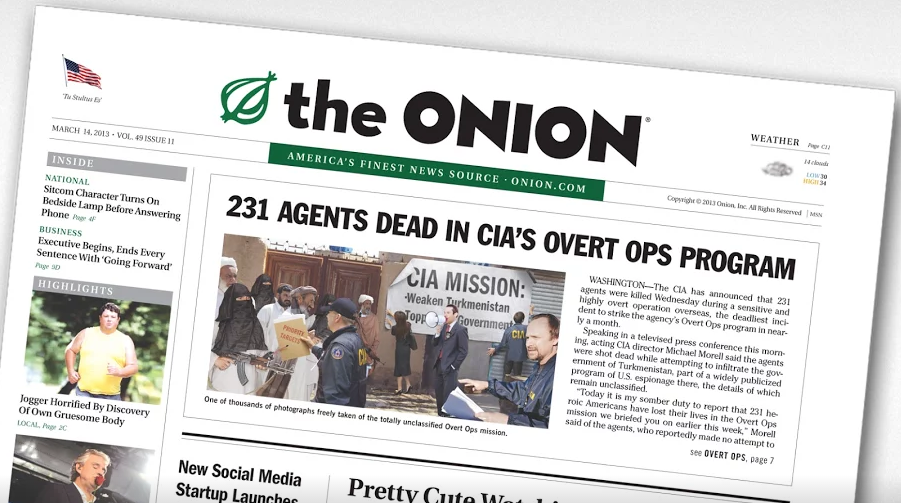 Front page of The Onion, a satirical newspaper. Image via Google Plus.

NEW YORK – Between reality and the bubble of fantasy news stories, these are tough times for satirists.

The New Yorker magazine recently took steps to distinguish Andy Borowitz’s humour columns from politically motivated false stories circulating online. His editor said the New Yorker was getting email asking if there was a difference between the two.

So they changed the tagline for “The Borowitz Report” from “the news, reshuffled” to “not the news” on the magazine’s website. When the stories are shared online, they are more clearly identified as satire, said Nicholas Thompson, editor of NewYorker.com.

Borowitz’s columns take the form of news stories, like one headlined this week, “Trump fires attorney general after copy of Constitution is found on her computer.” One story last week: “Trump enraged as Mexican president meets with Meryl Streep instead.”

“We were worried that the world was going to blur what he does with what other people are doing,” Thompson said. “Other people had an economic scheme to manipulate American politics. What Andy does, in the great tradition of satire and humour, is poke fun at American politics. They’re very different things.”

Thompson admits: “It’s a weird problem to have.”

The changes, first reported by WWD, have Borowitz’s blessing. He came up with the “not the news” tag.

“It made more sense when people from another country would read one of my stories and not get the joke – that was kind of predictable,” Borowitz said. “But the fact that so many Americans have to go to Snopes.com to find out that Trump didn’t really hire El Chapo to be head of the D.E.A. or something like that, that’s a reading comprehension problem.”

Satirists generally don’t like to have the word “satire” in flashing lights atop their work; subtlety helps the humour. Most so-called fake news stories have clear political intent _ like a much-shared one about the pope supposedly endorsing Trump. Some are fanciful enough to draw a chuckle.

The humour site The Onion bills itself as “America’s Finest News Source.” A story like “Trump supporter has ‘backup scapegoats’ ready to go in case immigrant crackdown doesn’t solve problem” isn’t marked satire. People who visit the site should be familiar with The Onion’s reputation, but it’s unclear if any steps are taken to clarify the intent when a story is spread online. The Onion’s editor turned down a request for an interview.

As the line has blurred for some, a website, realorsatire.com, has emerged to do precisely what its name suggests: enable readers to input the name of a site and determine its origins.

It was created more than two years ago to help web users navigate through an explosion in “clickbait” sites, where enticing news nuggets – mostly about celebrities – are used to draw people in so they can see the ads, said Jack Shepler, president of the Indianapolis, Indiana-based Ayokay Creative, which built the site.

“We saw people finding these ridiculous stories and posting them as real,” he said.

The two weeks after the presidential election were the site’s most heavily trafficked time, when publicity about manufactured political stories was at its peak, he said.

Many manufactured news sites purposely resemble real news destinations, increasing confusion. Shepler said he’s been surprised at how often people post clearly false stories _ even some of his relatives _ and thinks it’s because the desire to justify their beliefs is so strong they’ll take virtually anything at face value.

RELATED: Lessons from a week of fake news

One site, NewsMutiny, bills itself as “satire for the wise, news for the dumb.” One of its featured stories suggests a zoo is encouraging its patrons to harass gay penguins.

When questioned, some operators of sites that produce false news for political reasons have defended themselves by saying they’re producing satire, said Steve Bodow, an executive producer of “The Daily Show” on Comedy Central.

“I resent that as a citizen, but not as a satirist,” Bodow said.

More than the false news sites and competition, the New Yorker’s Borowitz said that his job is made more difficult by the increasing absurdity of reality.

“Once you’ve had a country that’s decided that a reality show host should have nuclear weapons, it’s kind of hard to come up with a satirical story that beats that,” he said.

At “The Daily Show,” Bodow and his fellow producer, Jen Flanz, have more material than they know what to do with. Trump is forcing writers and host Trevor Noah to find different ways of telling stories. There’s more to do beyond the common tactic of pointing out the hypocrisy of a politician’s contradictory statements, he said.