Is the anti-mammography movement based on bad science?

The debate over breast-cancer screening is turning into an academic feud, leaving millions of women in limbo 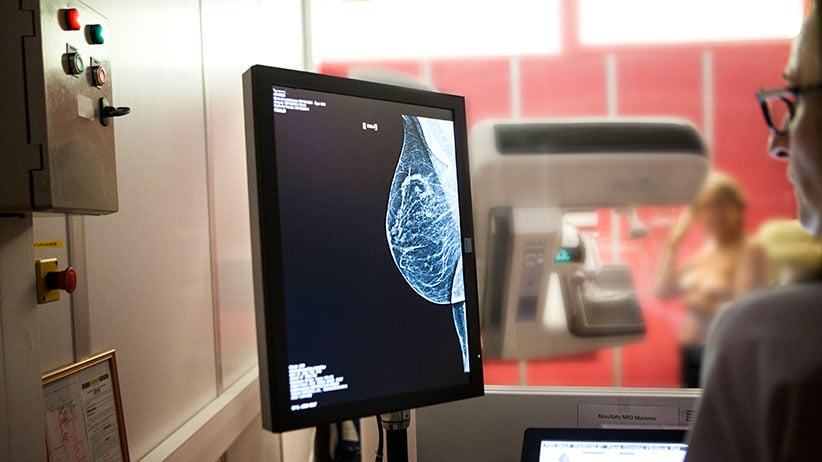 A landmark Canadian study at the centre of mammogram debate is under increasing fire. (BSIP/UIG/Getty Images)

Between medical research, treating patients, teaching responsibilities and raising two small children, Dr. Elaine Schattner didn’t have time for breast cancer. It’s one reason why the busy New Yorker avoided getting screened for the disease until, at age 42, her doctor recommended it. After a mammogram and an ultrasound, a small cancerous lump was found in her left breast. “That didn’t faze me much,” Schattner later wrote in a blog post about her experience. “As an oncologist, I knew that breast cancer is usually treatable if caught early.”

As obvious as that statement appears, it’s a controversial one. The debate over the effectiveness of breast cancer screening, and mammography in particular, is heated, with public health policy-makers in Canada favouring the anti-screening camp—at least for women under 50. The position is predominantly based on two Canadian trials that were conducted between 1980 and 1985 that found—after five, 10, and 25-year year follow-ups with the study participants—that mammograms for women in their 40s did not reduce mortality rates. On top of that, findings from the trials—collectively known as the Canadian National Breast Screening Study (CNBSS)—suggest that mammograms may cause over-diagnoses, creating a burden on the health care system and on women who undergo unnecessary invasive treatments.

These finding helped shape the recent screening guidelines in Canada that became widely accepted in 2014 when a follow-up study reinforced the CNBSS results: now, instead of starting mammograms at age 40, most breast screening programs suggest women wait until 50, and be screened every two years until age 74. Women of all ages are now also advised against doing self breast exams. The U.S. changed its guidelines two years ago to recommend women get screened annually starting at 45 instead of 40. Had Schattner’s cancer formed today and in Canada, it could have been another eight years before she was diagnosed.

Not everyone agrees that using mammography sparingly is best for women. The most vocal critic of this philosophy is Dr. Daniel Kopans, a radiologist with the Harvard Medical School. “It’s going to get women killed,” he says plainly. Kopans has long stopped mincing words when it comes to the CNBSS and its co-author Dr. Anthony Miller. The two have been embroiled in a debate over the merits of mammography for decades—each new publication a subtle jab at his opponent: “He has, as you probably know, patents in relation to devices used to find impalpable [breast] cancers,” Miller says. “It’s nonsense,” Kopans says of Miller’s findings. “I can’t find anyone who’s ever said that their images were any good.”

“He’ll go on forever,” Miller continues, showing no indication of slowing down himself.

The most recent tangle is over Kopans’ report published last week provocatively titled: “The Canadian National Breast Screening Studies are compromised and their results are unreliable. They should not factor into decisions about breast cancer screening.” He claims that, aside from the study using out-dated imaging technology even by standards at the time, the findings are based on flawed research methodology. “The fundamentals of a randomized controlled trial require blinded allocation,” he explains.

That means researchers can’t be privy to which participants get placed in the study group and which get placed in the control group. In the CNBSS, however, participants received a breast exam by a nurse before the trials began, and the results of those exams were recorded and known to the study coordinators.Among Kopans’s concerns: that sympathetic nurses who found lumps during clinical exams assigned those women to the mammography side of the study, as opposed to the control group.

“One of the fundamental principles of a trial is that you not know anything about the participants so you can’t inadvertently or intentionally load one side with, for example, women who are destined to die from breast cancer,” he says. In this case, there’s no way of ruling out whether that happened, Kopans argues; and if more women with signs of breast cancer, or risk of developing it, were placed in the group that received mammograms, it makes sense that the women in the control group (those who didn’t get mammograms) were less likely to be diagnosed with, or die from, breast cancer.

RELATED: Routine mammograms: evil, or necessary, or both?

Miller, who admits he only read the abstract of Kopans’ recent report, maintains that the trials were sound. “There was no incentive for the nurses to falsify the randomization,” he says. He explains that women whose pre-trail exams showed signs of breast cancer were referred to a surgeon who could then order a mammogram regardless of whether they were in the study or control group. By that logic, Miller says, there would be no reason for a nurse to place women with cancer into the mammogram group, because she could get one anyway.

But that doesn’t eliminate the chance of biased assignment, and in this case, it’s clear that it didn’t: a National Cancer Institute analysis of the study found “a statistically significant excess of women destined to die from breast cancer who had been assigned at the beginning to the screening arm,” Kopans notes in his report. Of the women with advanced cancers, 19 were placed in the screening group compared to five in the control group. And 17 of those 19 women had their cancer detected during the pre-trial breast exam. Hence Kopans’s theory about sympathetic nurses.

Those who challenge the value of mammography screening tend to think of breast cancer diagnosis in terms of cost-benefit, says Kopans. An analysis published in Annals of Internal Medicine shows that it would cost Americans US$10 billion a year if every woman over 40 got annual mammograms. But if only women aged 50 to 74 got mammograms every two years, it would cost just US$2 billion. “If you want to tell women we can’t afford it or we don’t want to spend the money, then say it,” says Kopans. “I get that we don’t have unlimited amounts of money. But don’t say it’s because screening doesn’t work.”

Kopans and other CNBSS critics have made some of these points before. Still, given the atmosphere around health care in the United States, he says there was an urgency to compile the evidence in one place. Indeed, the Canadian trials have been a huge influence on screening guidelines, globally. “The world trusts Canadian doctors,” says Kopans, “and certainly in the U.S., whenever we argue for screening women in their 40s, CNBSS comes up over and over again. For people who want to limit access to screening, it is the study to justify it.”

Dr. Rachel Flemming, a radiologist at Women’s College Hospital in Toronto, agrees that there are “definitely documented flaws in the CNBSS study that are well-known.” That should be taken into account when creating screening guidelines, she says, “but it’s tough. Mammography is a lot like vaccines in the way that it’s become so polarized.” While the Ontario Breast Screening Program doesn’t explicitly offer mammograms to women under 50, Flemming says those 40 and older are advised to speak with their doctor about whether they should get one, based on their personal risk or concern. Their doctor can then refer them to a radiologist for a mammogram, which would be covered by the provincial health care program. The Canadian Association of Ragiologists offers similar recommendations.

Schattner, who considers herself lucky to have been diagnosed early, says that those who argue against early screening fail to calculate the cost of treating women with late-stage cancer. “The notion that it’s okay to let a tumour grow is dangerous,” she says in an interview. Indeed, treating stage-1 cancer may involve a simple lumpectomy. By stage 2 or 3, chemotherapy and radiation may be necessary. “Wait to stage 4, and a woman is doomed to lifelong treatment with very expensive medicines,” says Schattner. “The cost of treating women with late-stage disease would be huge and no one looks at that.”

Beyond the incomplete cost-benefit analysis, Schattner believes this issue is about giving women choice—informed by current and valid research—when it comes to their health. “There’s a lot of hype against breast-cancer screening and I think the harms are exaggerated,” she says. “My concern about all the news against screening is that women will say, ‘Great—I don’t have to do this.’”