The Coronavirus and God

Michael Coren: There have always been some Christians who see crises as punishment from God for our sins. Coronavirus has been no exception. 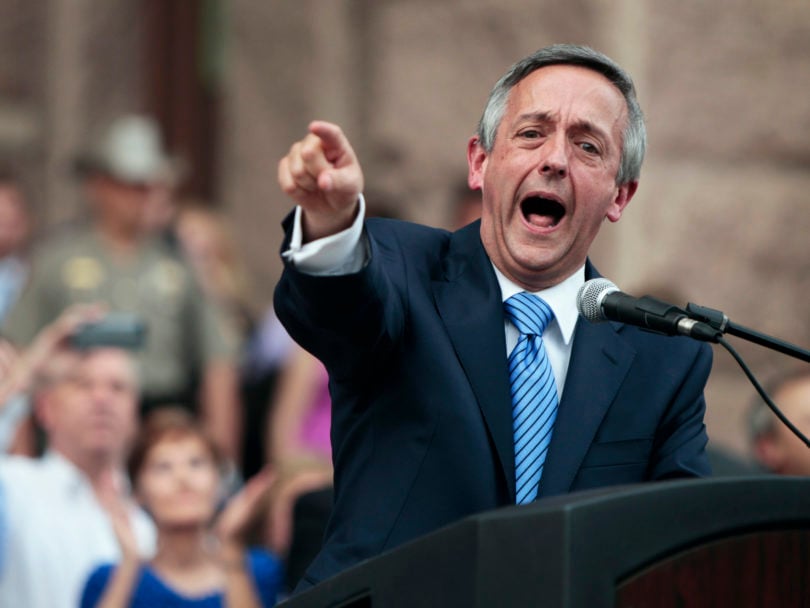 The Rev. Robert Jeffress, the controversial pastor of First Baptist Church in Dallas, speaks at an anti-abortion rally at the Texas state capitol on July 8, 2013 in Austin Texas (Erich Schlegel/Getty Images)

Generally speaking, organized Christianity, and religion in general for that matter, has reacted intelligently and responsibility to the Coronavirus crisis. Most denominations in Canada cancelled all of their services more than a week ago—before many other institutions and most businesses had done so—and are now live-streaming the Eucharist or prayer on Sundays, and issuing regular advice to congregants.

There was even something deeply moving last weekend about watching viewing numbers increase as people of faith joined in an internet community to worship together and demonstrate a worried but heartfelt solidarity in the face of a still unfolding threat. But such moderation and maturity is not, it seems, for everyone.

Historically, there have always been Christians who looked for scapegoats (Jews, foreigners, witches, whomever) when plague or disasters occurred, and others who were convinced that it was all a punishment from God for our sins. Those sins tend to vary according to the political climate of the day.

Back in 2014 Texas televangelist John Hagee said that the Ebola outbreak was God’s punishment for President Barack Obama’s policies about Israel, and after 9/11, Jerry Falwell and Pat Robertson claimed on U.S. television that God had allowed the terror attack because the Lord Almighty was angry with America for encouraging abortion, homosexuality and secular education. Then there was AIDS. Because in the western world the virus was particularly hideous and common among gay men and intravenous drug users, the Christian right saw God’s hand at work.

My personal theory is that God’s punishment for our sins is that we have to listen to hysterical fanatics screaming that God is punishing us for our sins!

But surely people have now come to their senses. Not really. Robert Jeffress is the pastor of Dallas First Baptist Church, which boasts a huge 14,000 worshippers. He is also a regular Fox News contributor and one of Donald Trump’s favourite ministers. He has just preached a sermon entitled, “Is the Coronavirus a Judgment From God?” At first it looked like we were going to be okay: “The coronavirus is not one of the plagues in Revelation,” he explained. But hold on just one fundamentalist moment. Jeffress continued, “All natural disasters can ultimately be traced to sin.” Damn, as it were.

Closer to home, this week on Lifesite News, a highly popular media platform extremely well-regarded by the Roman Catholic right, and founded by the influential Canadian anti-abortion organization Campaign Life, had its say. It ran a column with the headline, “Coronavirus is ‘the killer of globalization’ and a ‘scourge’ from God: Roberto de Mattei”, and then described the said Catholic historian de Mattei as a “celebrated intellectual.” The article went on to quote the man without any attempt at criticism or disagreement. “God is righteous and rewarding and gives to each what is his due … He not only chastises individual persons but he also sends tribulations to families, cities, and nations for the sins which they commit.”

Lifesite also listed as one of its featured blogs an article headlined, “Why coronavirus is a punishment from God that should lead to repentance.” The author wrote, “It is true that those who suffer most are not necessarily the greatest sinners, but the explanation of this is the familiar idea that the punishment God sends us is a sign of love.” Personally, I prefer a nice card and some roses.

At a more serious or theological level, this is a reductive and banal spirituality that may satisfy the zealot but is dangerously crass and in fact profoundly ungodly. It depicts a genocidal God, sufficiently cruel to hurt indiscriminately, and too indifferent or impotent to be able to punish only those who have genuinely caused harm. It’s all the product of an ancient, fearful belief system that has nothing to do with the gentle Jewish rabbi of the 1st century who called for love and forgiveness, and so distant and different from the Gospel calls of Jesus to turn the other cheek, embrace our enemies, reach out to the most rejected and marginalized, and work for justice and peace.

That’s the lyrical message emphasized every 10 years, for example, in Oberammergau. In 1633, the plague was devastating Europe, and the people of this Bavarian village swore that they would perform a Passion play every decade if they were spared. They were, and have kept their promise ever since. 2020 is supposed to be the latest production but, with supreme irony, it may well be cancelled due to Coronavirus;, truth be told, the locals were probably saved originally because they had sealed all of their borders. Faith and reason, you see, faith and reason. Far more effective than ranting about God’s wrath.