The key to growing Protestant churches

From 2016: Mainline Protestant churches that focus on the Gospel and prayer are growing, while those that don't are in decline 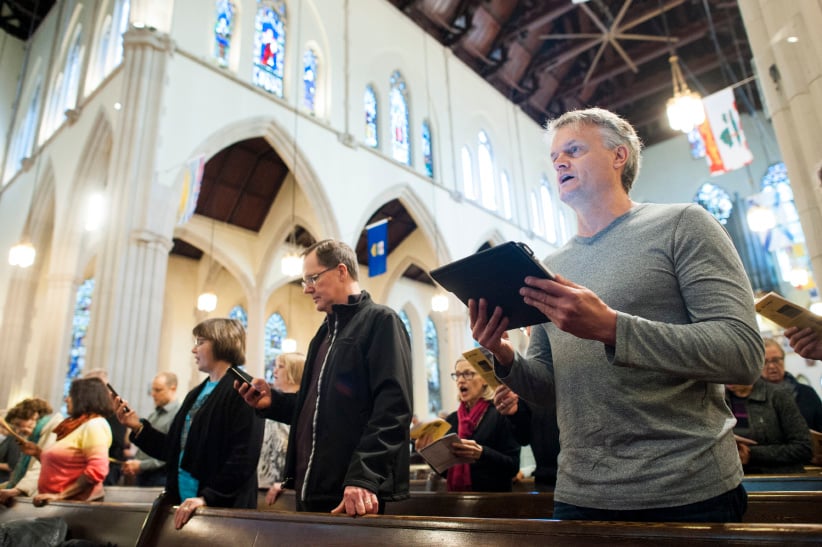 Joyce Badley, Robert Badley and William Cluett utilize the availability of smartphones and tablets as a means to follow the sermon at St. Pauls Anglican church on Bloor street in Toronto, Ontario. The church encourages the use of modern luxuries and technolgies during congregations. The church considers itself very progressive in a traditional setting. (Photograph by Cole Garside)

It is a little strange the first time around, allows an amused Rev. Canon Barry Parker, head pastor of St. Paul’s Anglican Church in downtown Toronto, “to see people holding up their smartphones and singing along with the hymns from the service bulletin we uploaded.” But Parker says it’s only to be expected in a church that also keeps a close eye “on our social media, and how well our summer barbecue is connecting to the community.”

In tiny Leaskdale (pop. 400), 80 km north of Toronto, where Lucy Maud Montgomery’s husband once occupied the pulpit in St. Paul’s Presbyterian Church, current pastor Andrew Allison nods along: “We aim to speak in the language of the listeners, not to make them learn the language of the messenger.” At St. Paul’s, the hymn lyrics appear on a big screen at the front of the church. Changing times naturally require changing means of spreading the good news of the Gospel, agrees Joel Sherbina, pastor of Paris Presbyterian Church in southwestern Ontario and an enthusiastic participant (along with the odd atheist) in the pub-based Beer, Books and Banter church group.

Innovation in outreach is not alone in linking these three pastors and churches. Their congregations are growing, making them rare buds on one of the more withered branches of Western Christianity: mainline Protestant denominations. And they are all theologically conservative churches, headed—however much they look askance at the label—by theologically conservative pastors. Conservative is a red-flag word for the pastors, too redolent of American political evangelicism with its militant anti-abortion and anti-same-sex marriage demands. Sherbina says his Paris congregation is Gospel-centred, supporting “different cultural views” rarely debated in church. “We would say we were Christians who hold orthodox views,” adds Leaskdale’s Allison.

Regardless of terminology, the long disputed question of just what role adherence to core Christian orthodoxy plays in a church’s numerical success—that is, whether it is growing or declining—has received a compelling and convincing answer in a major new peer-reviewed study by two Canadian academics.

In “Theology Matters”—its title a succinct summation of its conclusion—to be published in the December issue of the Review of Religious Research, Wilfrid Laurier University sociologist David Haskell and Kevin Flatt, professor of church history at Hamilton’s Redeemer University College, reveal the statistical commonalities among nine growing and 13 declining congregations in southern Ontario. The churches—located in the most church-rich part of English Canada—come from four mainline Protestant denominations: Anglican, United Church, Presbyterian, and Evangelical Lutheran. Decline was defined as an average annual loss of two per cent of attendees between 2003-13; growth by the opposite—although the truly expanding left that rate in the dust.

MORE: Take a closer look at some other interesting findings from the study’s data

Parker, whose St. Paul’s is a “destination” church, drawing attendees from as far afield as Barrie, 100 km north, thinks five per cent “is about normal” for a year’s growth. Sherbina’s flock has increased almost 80 per cent in nine years, while Allison has seen his St. Paul’s go from 35 Sunday attendees when he arrived 21 years ago to 400 now. Those numbers are far from usual. Scholars have tracked shrinking mainline membership for decades, and declining churches are easy to find. Identifying the growing ones, though, was a “challenge,” Haskell says. 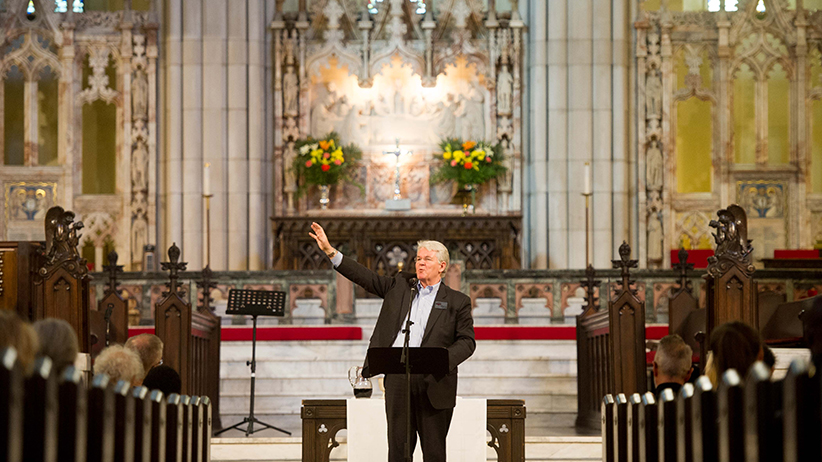 St. Pauls Anglican church on Bloor street in Toronto, Ontario encourages the use of modern luxuries and technolgies during congregations. The church considers itself very progressive in a traditional setting. (Photograph by Cole Garside)

Answers in accord with traditional Christian orthodoxy—basic articles of faith (the ancient Creeds), the authority of Scripture, God’s visible working in the world today, the exclusivity of Christianity (Jesus as the door to eternal life), the importance of daily prayer—were tightly bound to growing life in individual churches. As well, conservative churches had a lower mean age among attendees (53 to 63), emphasis on youth groups, the presence of young families, wide participation by congregants (not only on Sunday mornings) and a commitment to evangelism.

The lessons absorbed at growing churches are not confined there, but are being spread as ministers transfer to new churches. In recent years, two priests have left St. Paul’s Anglican to head up their own, already-established churches in Toronto, where attendance has climbed by 23-50 per cent since 2013.

Growing conservative churches also have an ironic openness to modernity in spreading the Word, though not modern readings of the Word itself. “Everything is on the table, except the Gospel,” says Parker.

“We are very interested in why those clergy and congregants don’t simply join evangelical churches,” Haskell says. “One possible reason is the stigma. For many Canadians that label ‘conservative Protestant,’ with its American political overtones, is a bad one. But conservative Anglicans [for example] don’t share those connotations.” Another possible reason is the cultural DNA: these are long-established Protestant denominations with generations of family ties and deep historical roots. “St. Paul’s has been known as ‘Rosedale at prayer,’ ” Parker says in reference to one of Canada’s tonier neighbourhoods, a five-minute walk away, “but we have a strong evangelical background as well. We are one of the founding churches of Wycliffe College,” the 19th-century evangelical Anglican college at the University of Toronto.

Nowhere do clergy matter more than in their most deeply held attitudes. Sociologists who study religion debate whether the decline in church attendance is a matter of demand—fewer moderns want it—or a matter of supply, with would-be Christians not finding the faith they want. “When we asked clergy why they thought churches grew or declined, those in the shrinking churches replied decline was because of socio-economic factors, the influence of secular society. Clergy in expanding churches said growth was because of what they and their members did.” And what they preached, adds Haskell: “Ideas have consequences.” 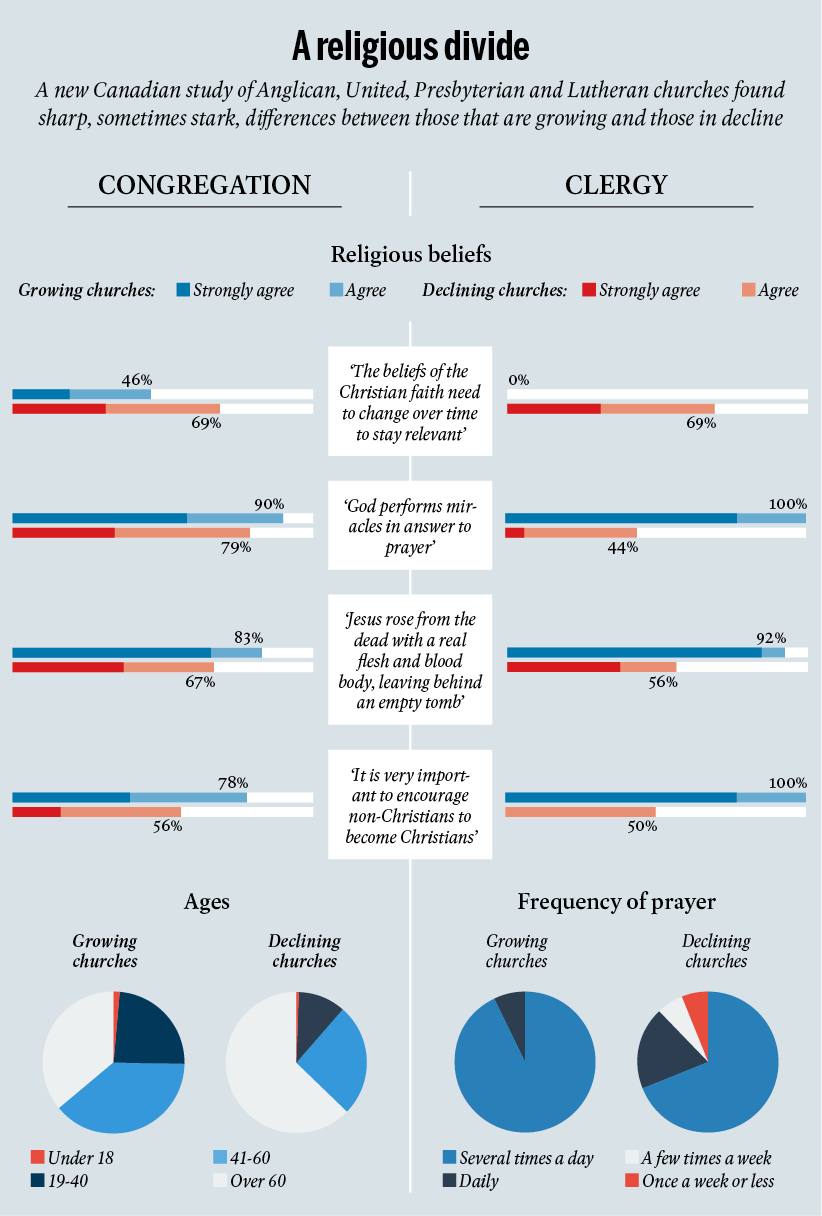