It wasn't the skate Patrick Chan was hoping for

But the men's competition is yet to come 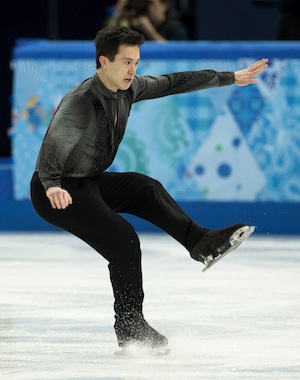 It was not the beginning that Patrick Chan—and all of Canada—had hoped for.

Kicking off the new team figure skating event, the night before the Sochi Games officially open, the 23-year-old, three-time world champion turned in an uncharacteristically shaky short program. Stumbling out of the landing on his quad, he shifted a planned triple toe into a double. Then he touched the ice with his hand following his usually reliable triple axel.

Chan’s score of  89.91 was almost 10 points below the season best he set winning the Trophée Eric Bombard in Paris last November. And it was only good enough for third place, behind Yuzuru Hanyu of Japan and Russia’s Evgeni Plushenko, the home crowd favourite.

“I think I was a little passive on the landings instead of really sticking them,” Chan told reporters afterwards. “There was that feeling, that hesitation because I wanted to be perfect and I feel like the centre of attention. All those little things crept into my mind.”

Coming third doesn’t quite rate as a disaster, but it was a disappointment. Canada still remains in the hunt for a medal, seeded second overall following a second-place short program from the pairs team of Meagan Duhamel and Eric Radford, with ice dance, and the women’s skates still to come. The top five nations will advance to the free skate medal round on Sunday. But either way, it’s out of Chan’s hands. Should Canada make it to the finals, it will be Kevin Reynolds who will skate the long portion.

Chan’s focus is now the men’s competition which begins Feb. 13. And he’s already trying to turn his disappointment into a learning experience. “I got off the ice and saw the scores and told myself that this is a great opportunity to get the jitters out,” he said.

And Chan, who has earned the right to be a little cocky with four years of world-beating performances since his 5th place finish in Vancouver, wasn’t exactly gracious in his assessment of the skaters who he will again face off against next week. Hanyu’s 97.98 was short of his own season best, and Plushenko, the gold medalist in 2006 in Torino, won the hearts of the crowd, but left the judges ambivalent, earning a mark of 91.39. “Those were all scores I’ve seen before,” Chan deadpanned. “I’m not too concerned about that.”

(Brian Orser, the former Canadian and world champion who coaches Hanyu offered a much different assessment. “You want your athlete to go out there and nail it. You can’t hold back, or you risk going backwards.” The 19-year-old Japanese skater could soon break 100, he predicted.)

Facing enormous pressure to become the first Canadian man to convert a world championship into an Olympic gold—something Orser, Kurt Browning and Elvis Stojko all failed to do—Chan’s greatest challenge seems to be his own state of mind. He’s spent the past four years proving he can win, but now he must do it when his country, and the entire world, is paying attention.

And in that sense, maybe a little setback was a good thing. The team event, a gimmicky addition to the Games, still means little to the skaters involved. A warm-up before the real events, even if actual medals are on the line.

“I’m the first one out and I’m alive after it,” Chan summed up. “There’s nothing to be scared of.”