It's the Geek Olympics, and British sports engineers are winning gold

Especially the cyclists, much to the surprise, and annoyance, of the French 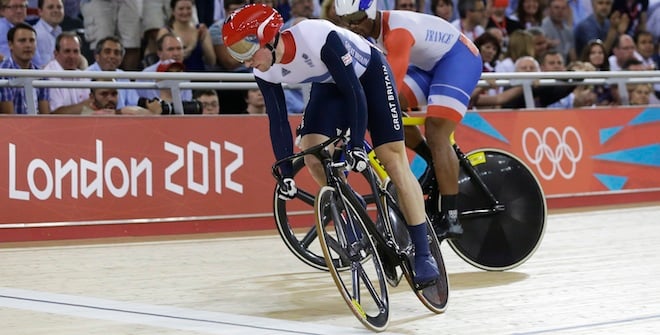 The French, who know a thing or two about cycling, have taken an intense and suspicious interest in Great Britain’s extraordinary success in all things bicycle at the London 2012 Summer Games. Well, if they’re upset now, they’d better brace themselves for what Britain’s geek squad of sports engineers has planned for the future. Spray on clothing, anyone?

Britain’s medal haul prompted the French newspaper L’Équipe to commission a poll on the issue. The result: 70 per cent think the British must be cheating, somehow.

When Jason Kenny won gold in the sprint, back when Britain just had a lowly five golds in track cycling alone, it was all too much for second-place Grégory Baugé of France. He turned the resulting news conference into an inquisition. Peppering Kenny with questions about his preparation, and why British cyclists always seem to peak at the Olympics.

France’s cycling team director Isabelle Gauther questioned how the British were gaining so many valuable tenths of seconds? Are they using “magic wheels,” she wondered in one interview. That prompted a typically understated response from Chris Boardman, the British cycling team’s head of research and development. “The main thing about the wheels,” he said, “is that they are round.”

Ah, but it’s not nearly that simple. The magic is in the science, and no sport has benefited more than cycling.

There’s the wind tunnel work that Canada among other countries also do to tweak bike, helmet, riding suits and rider positions. There’s carbon fibre bike frames and cranks, special saddles and handle bars and silk tires for the velodrome bikes, inflated to massive pressure. It’s the little things that count; witness one member of Britain’s cycling science team with the title: “head of marginal gains.”

But all that is old-school compared to what the British engineers have on the drawing board. They offered a tantalizing peek in a paper recently published by Britain’s Institution of Mechanical Engineers.

Developments in nanotechnology mean ‘spray on clothing’ could become a reality within a matter of years. A liquid-repellent coating would keep the rider dry, and thus lighter, while a protective coating could make helmets tougher without adding weight. Triathletes could use ‘spray chambers’ to change clothing instantaneously between the swimming, cycling and running events, tailoring their outfit for each event.

UK engineers are beginning to develop materials that, using nanotechnology, are able to change shape depending on certain conditions. This could have a transformative impact on sports equipment. Oars could bend as they hit the water to improve their hydrodynamism, ship hulls could naturally bend into corners or bicycle tyres could vary their tread depending on terrain.

3D printing, is set to revolutionize manufacturing in the coming decades. Sport will be no exception. Engineers could produce virtually any piece of equipment, including shoes, minutes before the event to suit the exact weather conditions or even the athlete’s physical condition, compensating for any injuries they may have.”

The report touches lightly on the ethics: do such advances give an “unfair advantage” to those that win the technological arms race, it asked. Not surprisingly, the teckkies aren’t inclined to think so. Engineering, it notes, “has gone hand in hand with sporting success since the ancient Greeks first turned a lump of stone into a smooth, aerodynamic discus.”