It’s wintertime, so head to the...patio? 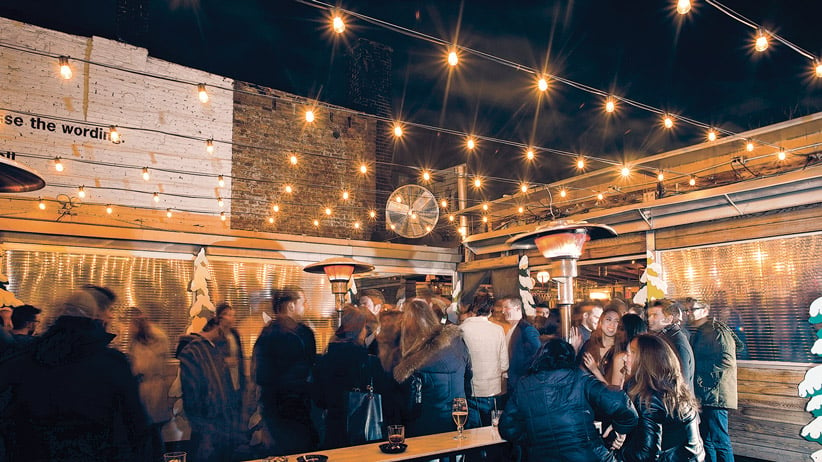 Contrary to popular belief, Edmonton is not always -40° C in the winter. On balmier nights, when it’s, say, a mere -10° C, patrons at the Café Bicyclette, a short walk from bustling Whyte Avenue, are invited to sit outside to enjoy a glass of hot chocolate or mulled wine. Staff set up heat lamps and chairs around wood-burning fireplaces, inside a section partially enclosed by a wall of snow to block the wind. If that’s not warm enough, there are also wool blankets and microwave-warmed seat cushions.

“At -10, people will actually order, go sit outside by the fire and have their meal,” says Daniel Cournoyer, executive director of La Cité francophone, a cultural and community hub that runs the café. “I mean, you’ve got to eat it quickly, because it is cooling fast.”

Canadians enjoy a cold one on a hot summer’s day as much as anyone else, but our northern climate limits optimal patio season to a few short months in some parts of the country. Not to mention that, when it comes to winter, Canadians can be wimps, too. But for a nation that prides itself on surviving and thriving in sub-zero temperatures, bars and restaurants across the country are creating a four-season patio culture and asking Canadians to consider sitting outside for a warm one on a cold winter’s day.

Last year, more than 50 Edmonton establishments set up winter patios as part of the city’s WinterCity strategy, with an eye to convincing locals “to quit hibernating in our houses and actually get out there, grin and enjoy winter and all its might,” Cournoyer says.

At the Drake Hotel in Toronto, the Sky Yard rooftop patio gets a complete makeover each winter, with Canadiana themes varying from mountainscapes to the Vancouver Olympics. For its ice-fishing motif this winter, Sky Yard has bleachers made from shipping pallets and wall art that mimics fishing shacks. The centrepiece, meanwhile, is the ice-fishing hole: a frosted Plexiglas tabletop with a circle cut out and lights inside to show off lures and other fishing paraphernalia. The patio transforms into an aesthetically appealing winter hot spot filled with folks cozying up under blankets as they sip spiked hot chocolate and cider. “You totally get couples canoodling out there,” says Mia Nielsen, the hotel’s curator of culture and programming. And when the snow starts to fall, it’s not unusual to see a snowball fight break out, or someone sprawl on the ground to make a snow angel. It redefines patio culture. “We like to call it ‘climate-defiant,’ ” Nielsen adds.

In Windsor, Ont., city council recently extended a pilot program allowing year-round patios for a second year, even if some spots didn’t attract hordes of locals. At the Squirrel Cage, a café tucked away in a laneway off a main street, co-owner Steven Thompson says decorating the patio lets passersby know they’re open. “It’s an invitation to come down the lane.” And when there’s a thaw cycle and the weather warms up, there’s no rush to set up outside. It’s ready to go. 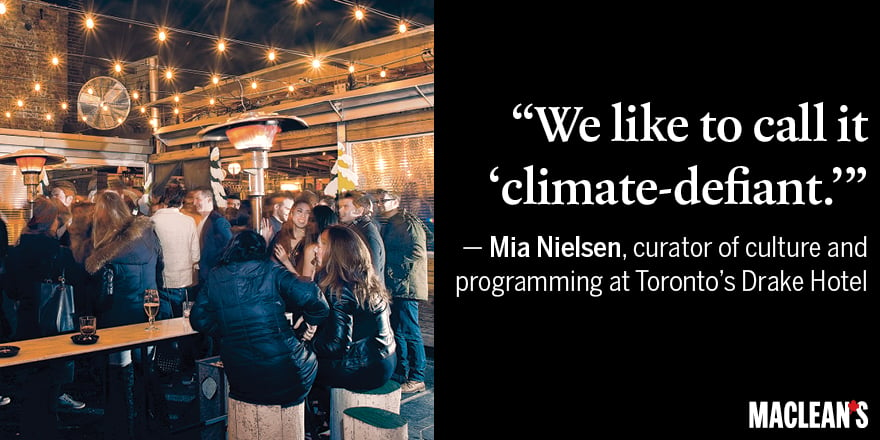 “When you’re downtown, you’re competing with malls that are closed in and heated,” says Larry Horwitz, chair of the Downtown Windsor Business Improvement Association. “This is one more opportunity to encourage people to venture to the city centre.”

For restaurant owners, however, winter patios are labour-intensive. When it snows, staff must get out the shovels. When the weather warms up and it starts to rain, they have to make sure the ground is cleared of ice. At Café Bicyclette, employees also have to chop wood and start fires. “If you were to measure it dollar-to dollar, are they profitable? Maybe not,” says Cournoyer. “Do they break even? Probably. But they create all sorts of secondary benefits.”

If anything, giving locals a reason to venture outside in the winter might be reason enough. It’s all about changing the mindset. “When you’re on a ski hill, winter patios are fantastic,” says Ian O’Donnell, president of the Downtown Edmonton Community League. “Why does that change when you come back to the city?”