As a 12-year-old, he was diagnosed with a deadly disease. As a teenager, he discovered his true passion: cooking. 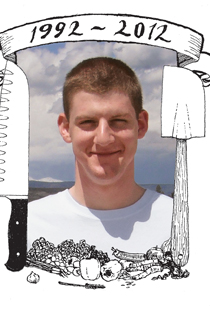 Jacob Moxie Whitney was a Mother’s Day baby, born May 10, 1992, in Brockville, Ont. For his parents, Monica Mroz and Randall Whitney, Jacob was the second of four children (after Alexander, but before Courtland and Stuart). He was, without question, the most rambunctious. “I don’t know if there is a better way to put it: Jacob was a challenge,” his mom says, smiling at the description. “He was on the go from the moment he was born.”

He learned to ride a bike when he was barely three—skipping training wheels altogether. When he was a little older, Jacob liked to climb out the attic window and walk along the roof. Or leap off the shed. “He was well known for trying out daredevil things, like riding his bike off the end of a picnic table,” says his uncle, Paul Whitney. “He was the kid where we all said: ‘Just keep an eye on him.’ ”

Doctors diagnosed him with necrotizing fasciitis—flesh-eating disease—and performed emergency surgery on his leg. They managed to remove large chunks of muscle and bacteria, but the prognosis was grim. “The doctor said he did not expect Jacob to make it through the night,” Monica says. “They brought in social workers. They were preparing us for his death.”

Amazingly, Jacob did survive. But the real fight had just begun. Confined to a wheelchair—his battered right leg stitched from hip to ankle—Jacob would spend the next two years learning to walk again. (The surgeons not only carved up his infected calf, but fused his ankle into a rigid ‘L.’) “It was a life-changing moment for him,” his uncle says. “But something changed inside him, too.”

Although his police officer dream was now shattered, Jacob was determined to recover. Week by week, month by month, he worked to regain his strength, graduating from wheelchair to crutches to a cane. Along the way, he refused to let his mom ever park in a handicapped spot. “There is someone who deserves it more,” he said.

In Grade 11, at South Grenville District High School in Prescott, Ont., Jacob discovered a new career path: the kitchen. Though never much of a cook at home, he was a standout in Moira Vanderwerf’s hospitality class. “He definitely had a natural talent, and he was always taking things one step further,” she says. “Can I take out the green peppers and put in zucchini instead? What other seasonings could I use?” After graduating with honours, Jacob enrolled in the culinary skills program at Belleville’s Loyalist College. “He was the tallest one and the quietest,” recalls one of his professors, Patricia Forster. “He was like a gentle giant.”

Jacob was near the end of his first year when a cousin, Caitlin Mroz, offered him a job. She was opening a restaurant in Val Marie, Sask., the gateway to Grasslands National Park, and she needed a cook. Jacob was as thrilled as he was nervous. “He asked me if I thought he was ready,” Forster says. “I said: ‘Yes, of course. How are you going to know unless you just dive in?’ ”

His mother, now separated from Jacob’s father, was equally nervous—for very different reasons. She knew her son would thrive at the restaurant, but Val Marie is a tiny Prairie town and the closest hospital is more than an hour away. “Mom, I’ll deal with my foot somehow,” he texted her. “Pain will not hold me back. I’ll push through it.”

Jacob finished school in April, then headed west for the Harvest Moon Café. At just 20 years old, he was in charge of his own kitchen for the first time—cooking bison burgers and serving Saskatoon berry ice cream. He enjoyed nothing more than watching a first-time customer savour one of his creations. “The short time he spent in Val Marie was the happiest of his life,” Monica says.

On July 4, a Wednesday, Jacob drove to Swift Current, 90 minutes north, to pick up an order of meat. On his way back, the car veered out of control and burst into flames. Jacob died of his injuries the next night, hanging on just long enough for his mother to arrive at the hospital and say goodbye.