A snowplow driver, he was one of the ‘old guys on the road’ who learned to be cautious of semis 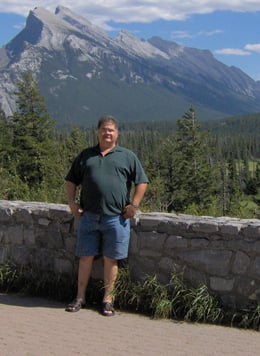 James “Jim” Roland Gallenger was born in Regina on Nov. 16, 1959, the third of four children to Joseph Gallenger and his wife, Leona. The couple owned a shoe repair business until Joseph got a job in an RCMP saddle shop. A “chubby little toddler,” Jim grew into a “good-natured” big kid, says older sister Darlene. With younger brother Michael or “Mick,” he rode bikes, and in the summer, battled for the bed by the window. (Neither liked the heat.) Jim was a modest boy who shied away from attention, but was popular among the neighbourhood kids. During shinny, he was always in net.

Perhaps sensing he would mature into an even bigger man, Jim decided that he should be called “Yogi Bear,” a nickname that stuck. After a few years of high school, Jim dropped out to drive a truck for the United Grain Growers Ltd. He was still a teenager when he met Sharon Hanofski at a party. Sharon suspects it was her size (at 15 she was barely five feet) that prompted Jim, now six foot one, to pick her up and carry her around. “He put me on his pedestal,” says Sharon, who was drawn to the “big, cuddly bear” with a “bum chin.” She got pregnant with son Trevor at 17, but says it didn’t take long for Jim, who was 20, to get over his initial panic. “He said, ‘We’ll work through this.’ ” When Trevor was born, Jim burst from the delivery room and shouted, “It’s a bear cub!”

Though they held off on marriage, Sharon says she “never worried” about Jim’s commitment. When Trevor was still a baby, they rented a house of their own. By then, Jim was working for the provincial highways department, installing guard rails and repairing roads. Co-worker Reg Robinson says Jim shrugged off the perils of working “right beside traffic that’s passing you by,” but learned to be particularly cautious of semis, which occasionally came barrelling through construction signs. He began his tenure as a snowplow driver in 1984, on the same day daughter Crystal was born. Part of a crew that would become “the old guys on the road,” says Reg, Jim was meticulous about clearing snow from highway shoulders.

In the summer, Jim mowed grass along the highways. Sharon, who was working maintenance at night, would often pick up lunch and take the kids for “a picnic” with him, she says. In the late ’80s, they bought their first house. Jim taught Trevor to play hockey and football. While shopping, he always held Crystal’s hand, which she says “would just disappear” in his. Though he rarely cooked, Jim loved to eat. “Everything was his favourite,” says Sharon. He joked about needing an “intervention” to stop eating her chicken dip. In March 1990, they put the kids in the car under the guise of going out for a fancy dinner. Instead, they drove to a nearby bed and breakfast and got married.

Like his parents, Jim was good with his hands. A “jack of all trades,” says Sharon, he would help friends with repairs, and execute construction projects he saw on TV, building a coffee table, cabinets, and a shed. With paint and stickers, he transformed old football helmets into CFL replicas, which lined the mantle. “He had every team,” says Trevor, but the Roughriders were his favourite.

Though Jim enjoyed working outdoors, the accidents he witnessed made him wary, and he warned his family to “watch out for the other guy,” says Crystal. As transport shifted from rail to trucks, the highways got busier. According to Reg, whenever Jim had close calls, it was “almost always [with] a semi.” He particularly loathed warm winter days, when “the frost comes up from the pavement and the snow blows,” says Darlene. Cars often wound up in the ditch, which Jim referred to as “the rhubarb.” Before cellphones, Reg says they often pulled over to help, but in recent years, after making sure everyone was okay, they usually kept plowing.

After Leona died in 1997, Jim’s dad stayed in their home. It had a big driveway and he was militant about clearing it promptly. So as Joseph got older, Jim made sure he beat him to it. Never one for praise, when the job was finished he departed, without so much as a knock on the door. Likewise, his sister Darlene and her husband sometimes woke up to find two Tim Hortons coffees on the doorstep. “Jim would never say anything,” she says.

On Jan. 16, 2009, Jim considered calling in sick. He was awaiting surgery for a torn rotator cuff, and his shoulder was bothering him. But “he worked through pain,” says Sharon. That day, a warm spell had made the roads slippery and the snow blow. Just outside of Belle Plaine, Jim’s plow broke down. While he was waiting for assistance, a car slid into the ditch, and he went over to help the driver. Just after 4 p.m., a semi lost control and slid into the men, killing them both. Jim Gallenger was 49.