Jan Redford’s memoir about rock-climbing, family life and feminism is right on time for the age of #MeToo 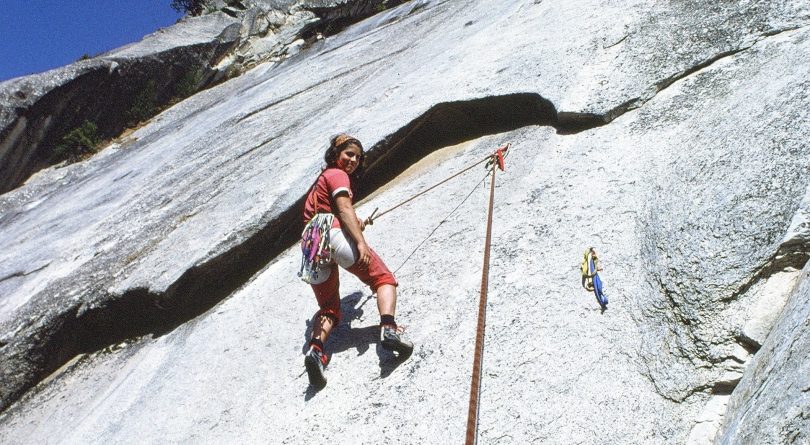 She chewed tobacco, did finger pull ups and swore with gusto. Jan Redford was a rock climber in the 1980s, long before women were commonplace in that community. Her debut book, End of the Rope: Mountains, Marriage, and Motherhood, is a swashbuckling memoir of her life “on the rock” in Western Canada, where she faced not only ingrained sexism, but also inner demons. After a heartbreaking loss, she found herself married to a logger and pregnant, struggling to maintain her dream of a less conventional life. In an interview with Maclean’s, Redford, now 57, reflects on climbing’s gender politics in the 1980s and ’90s, on being a single mom attending university (she eventually became a teacher, then a writer), and on why she “highlighted the s–t out of” her copy of The Cinderella Complex. She also predicts how her ex-husband, “Grant,” will react to her depiction of him the book (not well). This conversation was edited for clarity and length.

In the 1980s, it was early days for women rock climbers. How were you received?

There was a lot of unintended, well-meaning sexism. For example, men talked about taking me climbing, not just going climbing. They didn’t take other guys climbing. They took me under their wing and thought it was cute when I wanted to be the lead climber. But I didn’t want to be cute. I wanted to be a guide.

What drew you to climbing in the first place?

The sport suited me physically. It’s very graceful, like doing gymnastics on the rock. The lifestyle was another big draw. It was like a tribe you belonged to in the Rockies. It’s an identity you develop. We were outcasts from society in the early ‘80s—very counterculture. Climbing is so different today. It’s very mainstream and cool now. People climb in the gym, with bolts. It’s not as much of an adventure, that’s for sure. In my day, it was really alternative.

You certainly took an alternative path. Instead of going to university after high school, you graduated from the gruelling National Outdoor Leadership School in Wyoming, you climbed in Yosemite and B.C.’s Bugaboos, and you instructed at the National Army Cadet camp in Banff.

Yeah, I wouldn’t be caught dead in Toronto. I belong in the mountains, outdoors, and active. When you’re rock-climbing, your concentration crystalizes. Something washes over you. You know you’re completely on your own. I switched into “nobody can swoop in and protect me” mode. I was full of contradictions: I wanted to be small and childlike so that people would love me, but I also wanted to be big and strong and chew tobacco and be tough. I was definitely the poster child for The Cinderella Complex. So, I felt like a bad feminist because I had that conflict, as opposed to just living with the conflict and acknowledging I had conflict and accepting and understanding it. Because I denied it, I was unable to fully delve into it.

You found happiness with your boyfriend Dan Guthrie, an elite climber. Did that change the Cinderella Complex symptoms?

I’d become afraid of throwing myself into a man’s orbit (again) and whittling myself down. At that time, I sensed how important it was to be alone, and my biggest regret is not spending an extended period of time on my own when I was younger. That’s the only way to truly know yourself, as opposed to in comparison to other people and through other people’s lives. But female climbers were in high demand as girlfriends. You had to be pretty strong to stay on your own.

After Dan died at the age of 27, your life changed radically within a year. What happened?

I trained cadets that summer in a valium haze and began a relationship with Dan’s climbing partner, [the pseudonymous] Grant. I started taking courses toward a degree in education in Calgary, at 26. In the middle of first semester, I [accidentally] got pregnant and subsequently married Grant, just before he took himself off to climb Nanga Parbat in Pakistan. So, I was alone, miserable, heavy, broke, watching soap operas. He made it back for Jenna’s birth. We moved to Golden, B.C., so he could work at a logging camp. I got a job, while pregnant a second time, as a silviculture technician with the Ministry of Forests.

How did that go, being a working mom in a logging town?

Not well. Grant wanted me home with the kids. And he didn’t want me to finish my degree in Calgary.

No offence, but Grant sounds like a chauvinist jerk. At least twice in the book, he asks you, “What kind of woman lets a stranger raise her children?”

And I went easy on him! People who knew us, including my daughter, think I was very kind to him in the book. It reminds me of what Nora Ephron said about never getting any credit for the things she didn’t write about her ex-husbands. It’s odd—I don’t think he actually believes women belong in the kitchen, but he didn’t want his own lifestyle as a climber interrupted by the children. He doesn’t have any traditional expectations of our daughter. In fact, he’s very proud of her. Jenna thinks her father will not mind his portrayal in the book, but I disagree. He’s not going to be happy with it. He read the chapter called “Grant’s Lunch” when it was a short story, and he didn’t like it. He told me he won’t read the book, which is what I’m hoping. But I can’t count on it.

Gearing up to leave Grant, you went to four intense therapy sessions. What did you get out of them?

Therapy was about figuring out why I was with someone like Grant in the first place and that it was a choice. With all the trauma I’d been through after Dan’s death, it was hard to leave Grant. We had this connection to Dan and the climbing community. But I had to acknowledge my role in the relationship. My problem was that I was always reacting, reacting, reacting—not taking action in my life. Going to university was me taking action for the first time.

You went back to university in your 30s and moved into student housing with two young kids. How was that?

Incredibly difficult. The other students—20-year-old girls who lived with their parents in Calgary—couldn’t believe marriages like mine still existed. They didn’t understand the rural logging town existence. My son, Sam, was young, but Jenna saw me struggle on my own because I made this choice to go back to school. She didn’t see me become Gloria Steinem, but she saw me take control of my life. That’s really important.

Why write the memoir now?

Partly for the kids. I don’t want them to repeat my mistakes. And there’s another reason— I’m still plagued with a self-doubt and anxiety. The book is like a reminder, me giving myself permission, finally, to voice my story and take ownership of my reality. I still have voices in my head that come from other people—my ex-husband, my parents. The book is me finally replacing those voices with my own. But by getting it down on paper, it makes it real.

Did your feelings about climbing change after having children and losing Dan, along with many other close climbing friends?

I still climb, more cautiously, but mostly I mountain bike and climb in the gym. As a mother now, seeing younger people die, I empathize with their parents. I don’t understand climbing as well as I did when I started out. I don’t understand how somebody can leave behind a two-year old child and wife, or parents. So, my dedication to climbing has certainly changed. But it’s important to understand that climbers have a life wish, not a death wish. That said, I’m conflicted. I wouldn’t understand climbing at all if it took my daughter away from me. She’s a very good climber and a very different person. She doesn’t hurl herself off cliffs and hope she grows wings. She’s smarter than I was on the rock.

Because there’s such a strong feminist theme throughout the book, tell me your thoughts about the #MeToo movement.

#MeToo has shown that things haven’t changed that much. The big difference is that women—particularly young women–are not accepting it. They are not being silenced. They don’t feel it’s acceptable. In the climbing community, I felt like I couldn’t say too much because I didn’t want the guys to think I didn’t have a sense of humour and I wanted to be one of the guys. Women today limit themselves less than we [Boomers] did. We were still gaining more freedom and we weren’t quite there yet. Whereas young women today grew up with more freedom and believe they have the right to that freedom, but society is still trying to keep them down—with the high cost of daycare, student loans, pay disparity.

What did you learn on the rock?

When anyone’s climbing on the rock, the truth comes out. Your true personality emerges under pressure. And the ultimate pressure is when you have children. Who’s going to be doing most of the child care? Usually women. We’ve come a long way, but in some ways it seems we’re standing still.