He built his towing firm from the ground up. He loved being outdoors with family and with anything that burned fuel. 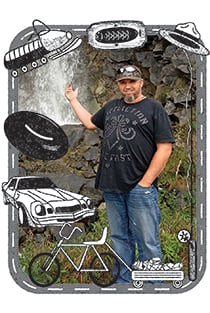 Jason Stuart Schaffer was born on April 11, 1974, in Regina, and spent his first day of life in the same room of the Regina General Hospital that his father had as a newborn. His dad, Stu, worked for John Deere and his mother, Diane, was a stay-at-home mom. Jason was a precocious child and full of energy. Not even six months old and strapped in a Jolly Jumper, he laughed so hard at the family dog doing flips that tears rolled down his face.

At five, Jason got a little sister, Tasha. “He would be the protective big brother,” Tasha says. Jason would walk her to and from school every day. When Tasha was old enough to walk home on her own, Jason hid in the bushes to make sure nothing happened to her.

The family moved to Swan River, Man., in 1982, when Stu joined the RCMP. Jason loved to ride his bike everywhere with a rope attached to a wagon filled with toy trucks, tools and rocks. “There was always something being towed behind him on that bike,” Diane says. “He would stay outside all day and come home, filthy from head to toe, with the biggest smile on his face.” When he was 10, a brother, Jared, arrived.

In 1987, the family relocated to Flin Flon, Man. The first few months were hard for Jason. His dad was the new Mountie in town and classmates teased him. His parents wanted to intervene, but Jason had a knack for getting along with others, and those who bullied him soon became his friends. Jason was also a hard worker and, at 16, saved up from his job at Home Hardware to buy a white 1980 Camaro. Always fascinated with how things worked, Jason took apart the vehicle to restore, paint and transform it several times over. “That was his lifetime project,” Stu says.

In 1990, his parents divorced and Jason took the news hard. After graduation, he moved with his mom and siblings to Brandon, Man. In May 1994, Jason went to hang out with friends at a local campground and he met Angela Thompson. The two started spending every moment together, going camping or to drive-in movies. Jason worked as a car salesman, but also did evening and weekend shift work for a tow truck company. “He felt like a superhero, being able to come to people’s aid and help them,” says Angela, who would often ride along with him.

They had their first child, Tyler, in September 1996. Seven years later, they had a girl, Ashley. With a growing family, Jason wanted to be educated in a trade, so he earned his journeyman’s certificate as an electrician. At one job site, he met Dusten Bittle. The two became such good friends—sharing a love for cars, hunting and fishing—that people mistook them for brothers. “Of all the stuff we owned, the things in the best shape were our couches, because we didn’t sit on them too often,” Dusten says.

After five years as an electrician, Jason spotted a need for towing in Brandon and started drafting his own business plan. He and Angela named the company Accel, short for accelerate. It launched in 2005 with one tow truck. But the company grew so quickly that Angela quit her job with the provincial government to work on Accel’s books.

Jason was a workaholic, but also loved to spend time outdoors with his kids. He’d go fishing with Tyler and once took Ashley tubing down the Saskatchewan River. The family took long trips to Mexico, Florida and the Yukon. Jason started to spend time with his brother, too, going snowmobiling together.

“Anything that burned fuel and made loud noises, he loved,” Angela says. In 2010, he went snowmobiling in the Turtle Mountains with Jared. Jason accidentally veered into a bush, breaking his neck, back, arms and ribs. The family was worried he might not survive—at one point he stopped breathing in the operating room—but he was so keen to get out of the hospital that he was back at work within months.

Jason worked as hard as ever, running the company and driving trucks, too. Accel continued to grow to a fleet of 20 vehicles and more than 20 employees. The Brandon Chamber of Commerce named Jason and Angela “entrepreneurs of the year” for 2010.

On Dec. 9, 2013, Jason responded to phone call shortly after midnight to tow a semi-trailer truck. After attaching his tow truck, Jason went under the semi-trailer to disconnect its drive shaft, a standard procedure. In a freak accident, the semi-trailer began to roll and crushed Jason. He was 39.