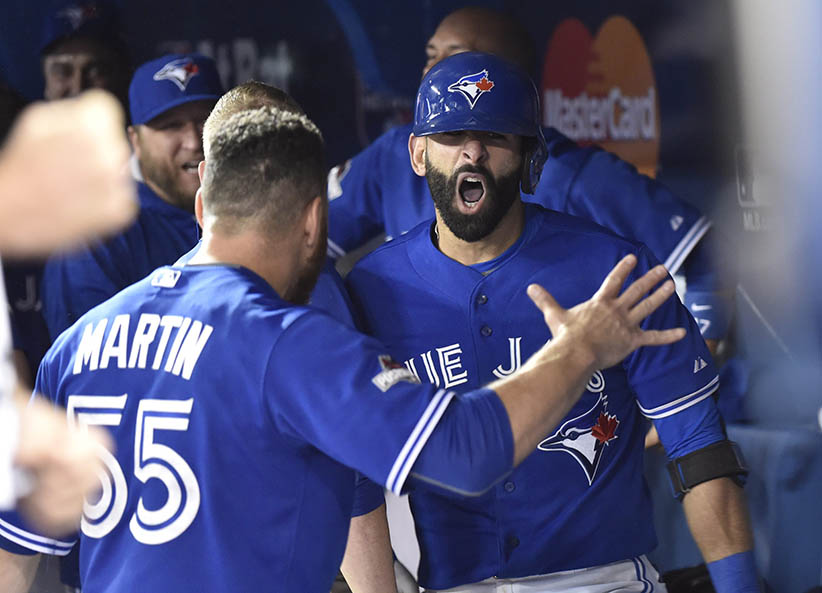 José Bautista swung the bat and stopped a riot. With the game tied, two men on, and two out for the Toronto Blue Jays, their most reliable slugger drove a 1-1 pitch back over the centrefield fence and transformed rage into celebration.

Half an inning before, home plate umpire Dale Scott had handed the Texas Rangers a 3-2 lead in the deciding game of the American League Division Series, when he ruled that Roughned Odor was indeed safe at home on one of the most bizarre plays anyone can remember. There were two out and Shin-Soo Choo was down to his last strike when Jays’ catcher Russell Martin tried to throw the ball back to Aaron Sanchez on the mound and somehow hit Choo’s bat. “I threw the ball like I always do. Probably over a million times,” Martin said later. “And that had never happened before.”

The ball ricocheted up the third base line and Odor scampered across the plate, even as Scott waved off the play. But after Texas manager Jeff Banister complained, and the umps conferenced, Scott changed his mind. And later, Major League officials in New York reviewed the replay and concurred.

The official explanation is found in Rule 6.03(a)(3), or as you might know it [former Rule 6.06 (c).] It states that if the batter is standing in the box and his bat is struck by the catcher’s throw back to the mound, the ball “is alive and in play,” as long as the hitter hasn’t—in the ump’s judgment—purposefully gotten in the way.

Until Wednesday night, it’s safe to say this rule was mostly theoretical. No one on either team seemed aware it existed. And even the umps weren’t too sure.

The 48,000 Toronto fans packed inside the Rogers Centre on the other hand, were certain it had been made up on the spot. They booed and jeered, and then they started to chuck their $13 beer cans from the upper decks on to the field. And each time the replay was shown on the giant outfield scoreboard, things got a little uglier. The Jays players cowered in shallow centrefield, out of reach of the projectiles. Police dodged beers and tried to identify the miscreants. A couple of kids down in the front rows got pegged. Dioner Navarro and other Jays came out of the dugout to plead for calm. It didn’t work. The crowd knew that Toronto, which had lost the first two games of the series, only to claw back even with a pair of wins in Texas, was getting hosed. 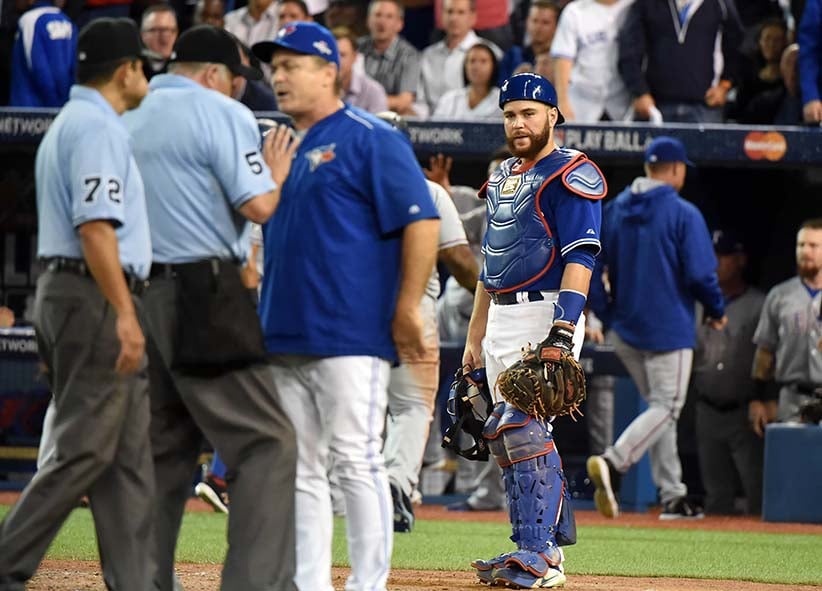 “I was walking off the field and a tallboy came right by me,” Jays manager John Gibbons said later. “I didn’t know if they were pissed off with the situation or me personally. Probably both.”

It took more than 20 minutes for play to resume and Choo went down on strikes. But that didn’t make the mood any lighter.

What did work was baseball karma. In the bottom of the seventh, Martin hit a weak grounder up the middle, but made it safely to first when Elvis Andrus, the Texas shortstop, bobbled the ball. The next batter, Kevin Pillar, hit a hard chopper into shallow centre, but Andrus—again—failed to hold on to the ball for the force out at second. Dalton Pompey came in to pinch run for Martin. Ryan Goins bunted, but Andrus—again, again—couldn’t glove the throw at third. The bases were loaded with nobody out.

Pompey ended up being thrown out at home plate on a Ben Revere slapper. But the bases were still loaded. And Josh Donaldson—surely this year’s American League MVP—tied the game with a bloop single to centre.

Then Bautista—the Jays’ most valuable player through good times and bad, the past seven seasons—stepped to the plate. His home run, estimated at 442 feet—the second longest of the post-season behind Edwin Encarnacion‘s 457-foot shot in the sixth inning—gave Toronto a 6-3 lead. And more importantly, it brought the mob to heel. The Jays went on to win, clinching a berth in the AL Championship Series. And everyone went home feeling light and happy, instead of burning and looting up and down Yonge Street.

As the ball sailed over the fence, Bautista took it upon himself to let Texas know just how cathartic a moment it was for Toronto. He stood and watched, pursed his lips, and appeared to say something unprintable. The he chucked his lumber up the right field line like it had somehow deeply offended him. It was the bat flip to end all bat flips.

“I can’t really remember what was going through my mind, to be quite honest with you,” Bautista said post-game. “I just enjoyed the moment, rounded the bases and got to the dugout. And after all the guys stopped punching me and hitting me is when I kind of started realizing what happened. I knew I did something great for the team.”

When the game finally ended in the top of the ninth, with Toronto closer, Roberto Osuna striking out the final two Rangers to preserve the win, there was bedlam. The players piled together near the mound as the crowd lifted the closed roof.  Marcus Stroman, the 24-year-old starter who gave the Jays six solid innings, throwing 98 pitches, leapt into the arms of Mark Buehrle, the 36-year-old veteran, who was left off the playoff roster.

The celebration inside the clubhouse was a little more stage-managed. Plastic sheeting had been taped up to cover the lockers.  And the Jays waited until Bautista and other key players were in place before popping the corks for the cameras. It was Italian Prosecco, not champagne, that made the locker room smell like excess. They’re still saving the good stuff for further down the line.

Then the team went back outside to do a victory lap before the remaining fans. Everyone content that the worst night in the world, had become the best, with just one, smooth swing. 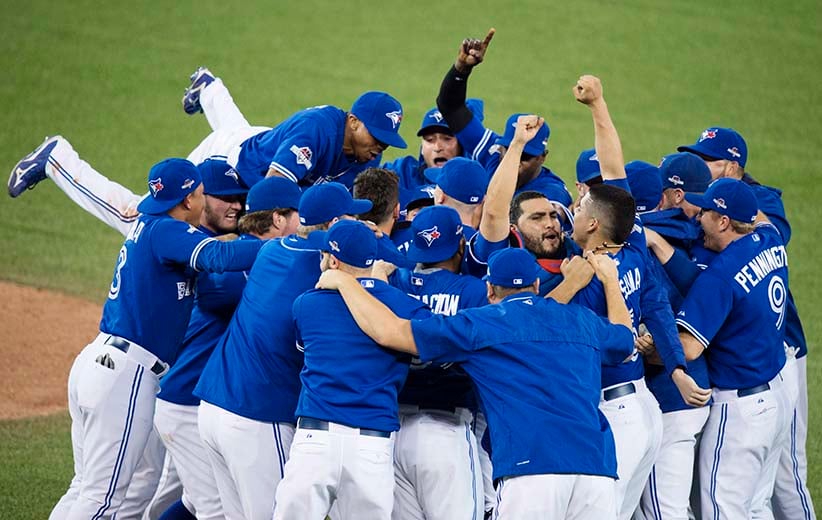