Canada's skip made Olympic history with a 9-0 round robin. Next up: gold. 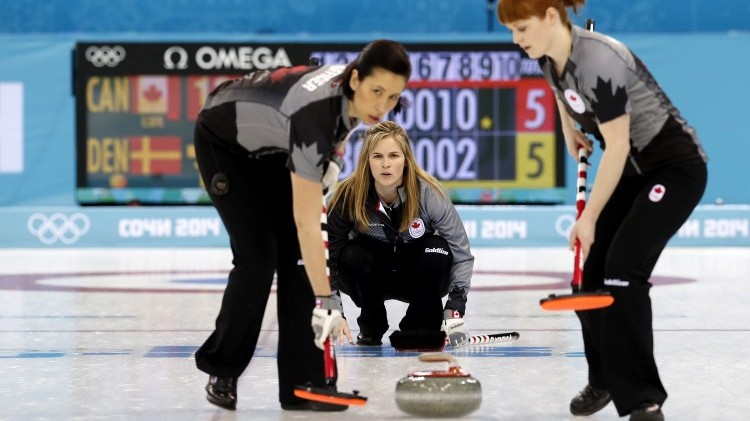 Most first-time Olympians enter the Games accompanied by a squadron of butterflies, not so skip Jennifer Jones and her curling crew. They ended their last practice before the start of the semi-finals Wednesday, calm, cool and relentless. That also describes their march through the preliminary round as the tournament’s only undefeated team of either gender.

“We’re rookies but we put together what we thought was a great plan for our team,” she said. “And obviously it’s been working for us.”

After two previous unsuccessful attempts to represent Canada at an Olympic Games, Jones and company are determined to make the most of their time in the Sochi spotlight. “My life is wonderful and I’m at the Olympics curling with the best bunch of girls in the world,” she said. “And we’re 9 and 0 and we’re playing great.”

That about sums it up. On Wednesday, Canada’s women meet Eve Muirhead and Team Great Britain. While the Brits have struggled in the preliminaries with four losses to just five wins, Muirhead can’t be counted out. At just 23, she was the youngest skip ever to win the world championships last year in Latvia.

“They’re a tremendous team,” said Jones of Great Britain. “You know, a couple of shots here and there and their record could have been better. We expect great things from them tomorrow absolutely, they’re one of the best teams in the world for sure. We’re going to have to be at the top of our game,” she said.

“The big moment is what sport is all about,” she said. “The adrenalin rush, I love that feeling in your stomach.”

Brad Jacobs and his Canadian men’s team is also on a roll after a shaky start. They enter the semi-finals Wednesday on a six-game winning streak. They face China, which proved Sunday to be a challenging opponent. It took Canada an extra end to ice a 9-8 win over the Chinese.

At Tuesday’s final practice Jacobs seemed content with a bit of fine-tuning and the prospect of some down time. “We worked on matching the rocks during training and everything seems to be good for tomorrow,” he said. “Now we’re going to go and see the family for a little bit, have a workout and then watch some of the other events on TV, and relax.”