Jessica Zelinka, and the sport that hurts

Canada best all-round female athlete leaves it all on the field, and falls short 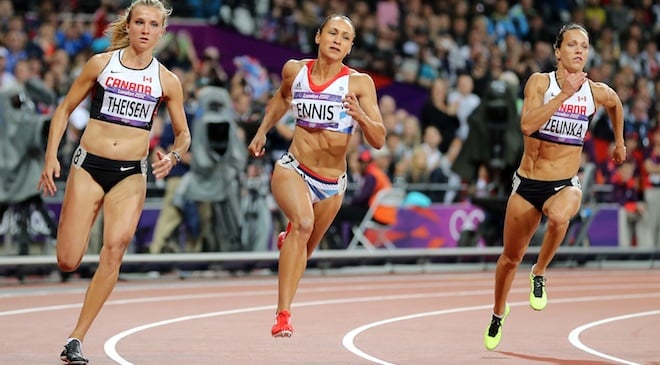 UPDATE: Jessica Zelinka was bumped from sixth to seventh in heptathlon after Lilli Schwarzkopf of Germany successfully challenged her disqualification for lane infringement during the 800-m. The decision gave Schwarzkopf the silver and relegated competitors below her one position each. The story below has been updated accordingly.

It was a cruel thing to do, inventing this two-day, seven-event sport to be scored in large measure by punishing mistakes. Tip a hurdle and the points fly off. Brush the bar, and you’re sliding down the leader board like Greg Norman in the throes of his worst meltdown.

For Jessica Zelinka, Canada’s greatest all-round female athlete, it was that damned bar.

Three times she threw herself up to the 1.71 mark in Friday’s high jump, and three times it dropped, blowing a hole into a score that otherwise would have won her a medal in women’s heptathlon.

She finished seventh, two ranks below her placing in Beijing, and fought for composure as the sweetheart of Team GB, Jessica Ennis, toured Olympic Stadium swaddled in a Union Jack.

“It was over after that. It was just too many points.”

And so another Canadian athlete departs the field of play in tears—even as the country basks in the warmth of gold and silver medals. Real tears, too, on a face crumpled with pain and backed by gut-wrenching sobs.

Zelinka’s unforgiving review paints over the magnitude of her achievements, among opponents who have lifted their sport in these Games to marquee status. Her 12.65 in the 100-m hurdles was outdone only by Ennis, who ran the race just a tenth of a second faster. In the 800-metre, Zelinka ran down the leaders after the first lap and Ennis’s No. 1856 was the only bib ahead of her when she crossed the line. Her time, 2:09.15, was less than two seconds shy of her personal best.

Athletes talk about leaving it all on the track. The 30-year-old Calgarian left all she had, and more. This is the woman, recall, who gave birth to baby daughter the year after Beijing, then battled back into game shape for her shot at London. She has spoken of the majesty of the Games, and those feelings were still there tonight—though her emotions kept her from voicing them.

What now, then,  for one of the country’s most sincere and ground athletes? A hug from her three-year-old daughter Anika. Some time with her husband Nathaniel Miller, a national team water polo player.

Then, a shade under 48 hours to prepare for the 100-m hurdles, an event in which she’s run world-class times in her last three outings.

As for the matter of Olympics to come, well, Zelinka could barely restrain her incredulity. “Rio?” she asked incredulously. “What?” And then, finally, a laugh. “I was thinking about Anika, how I’d love to be in the stands watching her compete. That would be the life, eh?

About as crazy as you’d expect, from a sport tailor-made to raise hopes and break very, very strong hearts.