A born leader with a passion for flight and film, he found his dream job on the TV series Dangerous Flights 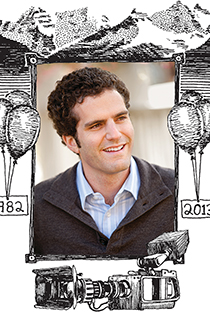 John Frederick Driftmier was born Nov. 24, 1982, in Calgary, the first-born son of David, a schoolteacher, and Sophia, a psychologist. Peter, their second-born, would follow four years later. From a young age, John was a natural leader. At age 2, his dad dropped him off at a daycare before heading to church—the toddler’s first time in such a place. David was nervous, curious how his son would fit in. To his surprise, John used boxes as boxcars to organize a make-believe train with the other kids. He sat in front, running the show, acting as the train’s engineer. John, says his mom, was “born to direct people.”

An early obsession with trains later shifted to cameras and airplanes. By the time he was a teen, John yearned to fly. The fastest route to the sky was the Royal Canadian Air Cadets. “He was the son of two pacifists,” says David, who wasn’t keen on a military environment. But John was determined to fly, and joined the cadets at age 12.

The family didn’t own a video camera, but John would beg his parents to rent a camera once a year for his birthday party. “He had a whole movie organized in his mind and he would get the kids to act,” says David. “He would be behind the camera.”

As a teenager, John developed a reputation for stubbornness. He couldn’t resist when, in Grade 10, a classmate dared him not to cut his hair until graduation. He took the dare, and eventually parlayed the stunt into a charity gig for cancer awareness: the longer he grew his big, curly locks, the more money he raised. He wouldn’t cut it for anything. And when John had a job teaching snowboarding at Calgary’s Canada Olympic Park, his boss asked him to trim his hair. John refused. “That cost him his job,” says David. But by then, John, who was vice-president of his senior class at Calgary’s Western Canada High School, envisioned a career beyond the slopes.

John’s fondness for cameras led him to Simon Fraser University in Burnaby, B.C., where he studied film and history—and, in 2002, met Carolyn Allen. They shared a passion for skiing and snowboarding and were soon dating. At SFU, John produced a documentary by remastering old footage his grandfather had shot in Sudan in 1941, where he’d done missionary work. John narrated the film, which he called Story of a Lifetime. “As usual, he was behind the camera,” says his dad.

In 2008, John got his break on a British TV series called Monster Moves, about the complex relocation of enormous ships and trains. Two years later, he and Carolyn married. They settled in Ottawa, where Carolyn had grown up and, in 2011, they bought a century-old house, which they renovated constantly—a “shared labour of love,” says Carolyn’s brother-in-law, Steve Konkle.

By then, John was constantly on the move. In 2012, he started working on Dangerous Flights, a TV series that followed a company of pilots who deliver second-hand airplanes all over the world. The crew ventured to every continent except Antarctica—occasionally over long stretches of ocean—delivering rickety planes to a Brazilian rancher in the Amazon, for example, or a UN mission in South Sudan. The gig melded John’s passions for flight and film. “He was curious about the world,” says his mom. No matter how risky the flight, Sophia says, John was determined to follow through. “He just soared and flew, and had this limitless life,” she says.

John had “a way with people,” David says. On the road, he’d pack his ukulele and use it to make friends. Once, in Brazil, he befriended a cab driver simply by strumming his uke, and ended up staying at the man’s house. During a recent overseas trip to Kenya on a shoot, John regaled a roomful of people with tales of his travels. He loved telling stories about the people he met along the way, says his dad. And although John was spending much of his time away from home by then, he managed to call Carolyn every night.

On Feb. 24, after a night of storytelling, John boarded a plane with the Kenyan wildlife conservationist Anthony King, also a well-respected pilot. On a run-of-the-mill flight to get extra footage at a safari park, an apparent downdraft caught the plane. King couldn’t regain control and the aircraft plunged into Mount Kenya. Both men died. John was 30.