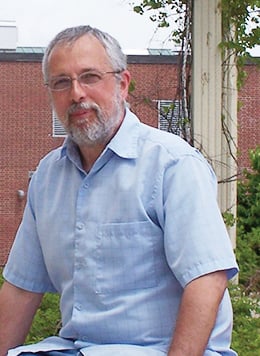 John Patrick McKendy was born on Aug. 21, 1949, in Bathurst, N.B., to Arthur and Bernadette McKendy, who raised their seven children in a devoutly Roman Catholic home. The second oldest, John, stood out from his siblings as “the sensitive one” with a “quiet, almost brooding” nature, says his brother Mike. While Arthur earned a living as a civil servant, the boys were often cast outdoors to invent their own fun. “John was the conscience,” says Mike, “He wouldn’t let us get too far astray.”

Though Bernadette, who later became a children’s librarian, impressed the importance of education on her four boys and three girls equally, says Mike, “we all knew that John would go beyond our achievements.” His deep intellect and focus won him top marks. In his teens, he earned his amateur radio licence—perhaps early evidence of a desire to listen to others. But despite the accolades he got from school, or from Boy Scouts and Air Cadets, John “shunned honour and recognition,” says Mike, recalling how his “painfully shy” brother preferred to soak in the action from the periphery. “He certainly didn’t do it for the badge.”

After high school, John followed in his older brother Charles’s footsteps and enrolled at St. Francis Xavier University in Antigonish, N.S., where he excelled. Occasionally, John would hitchhike home to Bathurst with his friends, who, like him, “were the sensitive type,” says Mike. The Kent State shooting in 1970, in which four students were killed, was pivotal for John. Though he retained his faith in God, he chafed at the rigidity of institutions like the Catholic Church. By the time he was in Toronto earning his Ph.D. in sociology, he had gravitated to the more peaceful, meditative doctrine of Quakerism. The notion that “people are not inherently bad,” says friend Vince Zelazny, became intertwined with his academic pursuits.

John met his wife, Carol Wakeham, at Mike’s wedding in New Jersey in 1976. He was the best man, and she was the maid of honour and sister of the bride. Despite their differences—she took charge, while he was more laissez-faire—theirs was an attraction, recalls Mike, that “stood out, even against the focus on us that day.” After a year-long, cross-border courtship, they were married. When his daughters Colleen and Laura were born, John fostered an encouraging environment, where there were never winners or losers. “They adored him,” says Mike.

Among the professors at St. Thomas University in Fredericton, where he taught throughout his career, John was a “peacemaker,” with a knack for “dealing with wounded egos,” says long-time colleague Sylvia Hale. In his field, the research he conducted with men who had abused their partners, and the workshops he facilitated with Dorchester Penitentiary inmates, was considered radical. Though he “had never been violent in his life,” John conceded to the men that “all of us have been abusive,” says Sylvia. Their stories strengthened his belief in guidance instead of punishment.

Though John was passionate about research, his first love was teaching. Clad in sneakers, jeans, a collared shirt and sweater, the professor who refused to be called “Doctor” inspired his students. In early 1994, Dawne Clarke was a single mother who had recently escaped an abusive relationship. As she struggled to hold her newborn daughter while taking notes in John’s class, he scooped up the baby and finished the lecture. Recalls Dawne, “He didn’t even break stride.”

It was a desire to understand the causes of violence, and hunger for travel, that led John to volunteer in Burundi in the summer of 2007 and again in 2008. During the six-week stints, he helped construct an AIDS clinic, and took part in alternatives to violence workshops with people who were both perpetrators and victims of the Rwandan genocide. “He was right in the middle of everything, relating to everyone,” says coordinator Dave Zarembka. John applied for a sabbatical, and was planning to return in January on an open ticket.

John’s daughter Laura had been married for less than a year when her relationship “crashed completely,” says a friend, and she moved in with her dad. He revealed snippets of the trauma to colleagues, and put his trip to Africa on hold. At a recent Quaker meeting, John prompted those gathered to pray for Laura’s husband, Nicholas Wade Baker. On Friday, Oct. 31, a violent attack occurred. Police have released few details, but they believe Nick assaulted a woman, whom friends and family identify as Laura, and killed John in his home. On Saturday, Nick’s body was found in a rented car, an apparent suicide. John McKendy was 59.