John Scott, and how the NHL applied hockey's 'Code' on its fans

The trade of John Scott, all to preserve the 'sanctity' of the All-Star Game, shows that the NHL has rules on who is allowed to be a fan 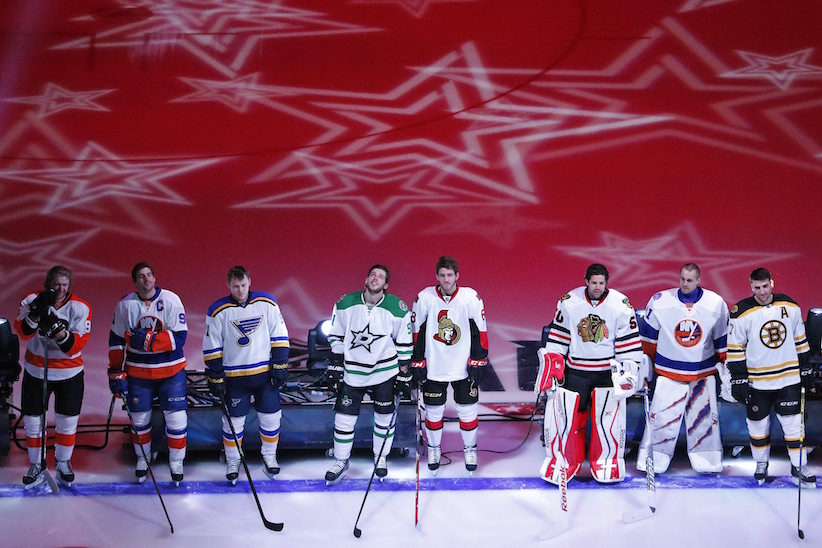 UPDATE (Jan. 19, 2016): Three days after the trade, the NHL has announced that John Scott would be allowed to captain the Pacific Division All-Star team.

It can feel like hockey is governed by vicious Old Testament gods. How else to explain its arcane, inscrutable “Code,” the set of unwritten rules that silently govern who can do what, that say how an athlete is allowed to respond to a given situation, that make personality a sin among its ranks? In a sense, the Code can boil down to two main tenets: Everyone must know their role, and stay within it; and if you’ve been wronged, you must fight back.

The governance of this elusive Code is just one of the reasons that the league’s All-Star Game—a corporate festival feting the kind of simple, pure hockey that the NHL doesn’t really purvey—is meaningless. (The other major reason is that the All-Stars aren’t so much playing hockey, as they are simply trying not to get hurt.) Sapped of personality, the players arrive at a city, deliver their standard hosannahs about the privilege of playing a game whose score has zero influence, and life goes on.

The Code has its critics and its guardians. But in a brazen act of behind-the-scenes manoeuvring, which turned a surprise All-Star into an exiled minor-league player, the league proved it wasn’t just willing to apply its rigid, impossible Code to its players. It was willing to enact it on its fans—and not for the first time.

As it has been for years now, the NHL has used fan voting to select their favourite players. Their expectation, of course, was that hockey fans would match the rigid, vanilla conventionality of its players—that they would do what’s right and pick the best players. 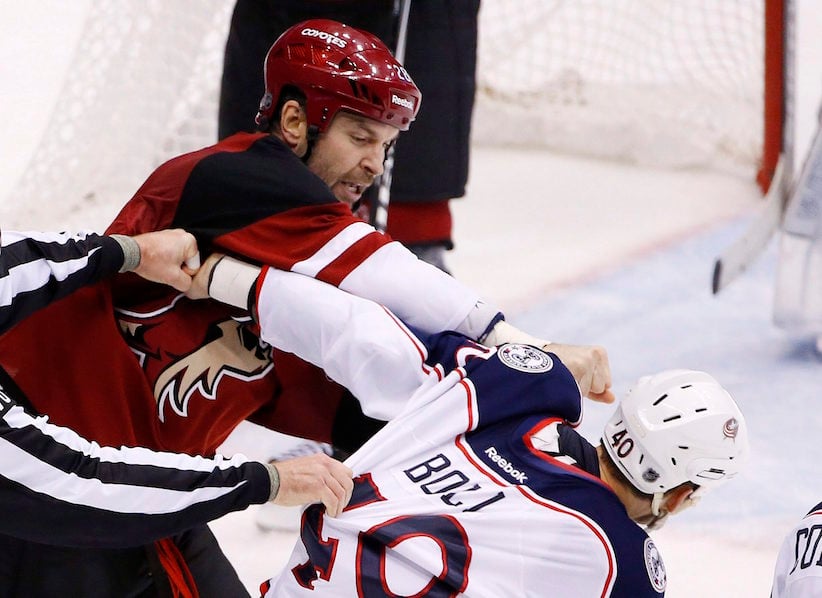 Well, a funny thing happened on the way to democracy. An online campaign glommed onto little-known Arizona Coyotes pugilist John Scott—a player whose trips between the majors and minors outstrip the number of NHL goals he’s scored—and launched a bid to have him selected to the All-Star Game. And launch, they did: Scott accrued so many votes that he was named the captain of his Western Conference division.

His selection roiled some. There are better players on the Coyotes’ lineup, some argued. And his being chosen was, let’s face it, a mass-media, populist form of online bullying. (Scott was lifted up because he is one of the league’s least skilled players; the fact that he’d get a hefty All-Star bonus, right in time for the birth of his twins, is a bit of a retrospective somersault of fortunate logic.) But Scott was a gentleman throughout this awkward affair, and it felt like a reason to actually tune into a typically boring event.

Then, the aforementioned manoeuvring. After Scott reportedly rebuffed requests for him not to attend, the Coyotes announced on Friday evening—a timing that journalists know well for the dumping of unhappy news—that Scott had been traded to the Montreal Canadiens, the Eastern Conference contender with no need for a non-scoring presence like his. The Canadiens sent him to their minor-league affiliate in St. John’s, N.L., and are unlikely to call him up. In a series of swift moves—moves that experts and insiders suggest were orchestrated by the league itself—the NHL fixed its John Scott problem.

John Scott was previously asked by both NHL and Arizona Coyotes to bow out of NHL All-Star Game. He refused. Trade likely takes care of that

The fact that it was a problem at all is interesting, as the All-Star Game hasn’t mattered in some time. But at least there was a feeling that the league acknowledged what it was—a trivial frivol—and wasn’t too worried about it.

This is not the first time the NHL has pulled the rug out from under their fans. In 2007, a grassroots campaign to send journeyman stay-at-home defenceman Rory Fitzpatrick to the game bubbled up; when he started to lead the balloting, the NHL implemented embarrassingly weak CAPTCHA tools, then a time delay between votes, before a mysterious drop-off in voting totals cost him a spot. Some suggest this happened because the NHL nefariously deleted 100,000 Fitzpatrick votes.

The Sabres’ Zemgus Girgensons also experienced this last year, partly because he had the fervent support of his home country of Latvia, partly because of this Latvian rap song about him, and partly because, well, his name is Zemgus Girgensons, which is tremendous. The NHL, though, didn’t seem to need to scupper his chances, perhaps if only because there weren’t too many better options from Buffalo, or perhaps in a bid to grow its brand in hockey-mad Latvia.

But what’s most galling about the Scott trade—even if somehow the league had nothing to do with it—is what it says about the NHL: it believes the All-Star Game still matters, if it ever did.

This, despite the fact that the NHL’s own history of tinkering with the All-Star Game proves it doesn’t matter. This year will mark the debut of a new format, a series of 3-on-3 games. Before that, the novelty was pitting North American stars against their World compatriots, or making two captains pick the teams, like a school-lot game of pick-up. Stars often bow out, either way; Sidney Crosby, one of the NHL’s brightest lights and a major face of the league, has attended the game all of once, usually deploying questionable excuses, while Jaromir Jagr, another one of this year’s All-Star captains, has said on the record that he’d rather not go. For two seasons, between 2005 and 2006, the All-Star Game didn’t even exist, and it was not mourned. It’s not as if the league even necessarily sees the sport as sacred and untouchable: It’s hard to forget the era when the league threw a neon light trail onto the puck for broadcasts, a carnival trinket that made the game look like Tron.

Instead, the NHL saw this as an opportunity to enforce its ridiculous rule, not just upon Scott—who under the Code should have done the right thing and stood down—but on its fans. This kind of condescension is the one that hockey players are used to having enacted on them—the kind that gets P.K. Subban criticism for being too “flashy”—but is now being doled out on the people who pay to watch the games.

Fans were supposed to play their part, be on their best behaviour, perform their role. The ones who supported this campaign have been cast as false fans, as the invaders at the gates; Don Cherry, an anthropomorphic stone slab of the Code, slammed the fans for voting them in, but it’s not the fans’ fault that the rules changed after the game was played. These aren’t false fans, they are fans all the same—but they didn’t play their part. And now, instead of letting it happen, us moving on, and fan voting quietly being changed next year, Scott and the fans will be punished, suddenly. This, the NHL is saying, is why you can’t have nice things.

Much has been made of the league’s callousness, reportedly orchestrating the trade of someone about to become a father of twins, just to purify a meaningless novelty game. But this incident is even more reflective of the league’s warped sense of self. It will claim that “hockey is for everyone,” as per its slogan—but it isn’t, unless you obey the Code, a screed that now goes for players and fans alike.

So to boycott the NHL All-Star Game? Don’t worry. You probably weren’t going to watch it anyway. But now you have a reason: The NHL doesn’t want you to. And as per the rest of its Code: if you’ve been wronged, fight back.