His daily text messages and photos to family spread his good cheer. But his real passion was running the streets of Halifax. 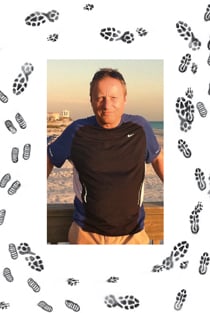 John Stephen Dunn was born in Halifax on April 5, 1954, the first of five children of Muriel, an administrative assistant, and Ron, a Korean War veteran and navy officer. Ron and Muriel, who started calling their youngest Steve when he was a baby, had a home where the whole family ate dinner together every night. The kids shared chores, such as doing the dishes. When it was time to play, Steve was always on the move. “He must have thought he was a cowboy or something then,” says his sister Linda, recalling a time when Steve used to run around the house chasing his siblings with a toy lasso.

Steve was a teenager when the navy relocated his dad to Saint-Bruno, Que. When he wasn’t playing Beatles songs on his guitar in his bedroom, Steve learned French and worked first as a newspaper carrier, then as a lifeguard, and finally as a caddy in a golf club during the summer with his pal Glenn Pate. “We saw Black Sabbath for $2,” recalls Glenn, who fondly remembers hanging out with Steve, eating fries dripping with vinegar, and listening to Steppenwolf on the jukebox in the early ’70s.

When the family returned to Halifax a few years later, Steve graduated from St. Patrick’s High School and went straight to the Nova Scotia Technical College, where he graduated in 1978 from chemical engineering. That same year, he got a job as an engineer with Air Liquide in Mount Pearl, Nfld.

Nobody knows exactly when it started, but when he returned to Halifax in 1985, Steve was hooked on running. He took it so seriously that in 1988, he was on one of only six teams that ran the very first Cabot Trail Relay Race, a 276-km event for teams of 17 runners, each of whom covers a 12- to 20-km section through the mountainous terrain of the Cape Breton Highlands National Park. In the last 25 years, Steve ran all but a few Cabot Trail races. Although he didn’t run marathons, he went for a jog almost every evening, even when he was away on work trips.

A natural problem solver, Steve launched a career as a management consultant after getting his M.B.A. from Saint Mary’s University in 1992. He’d travel often for the new job, but Halifax was his home, and his favourite running route was one that took him through the city’s streets and ended at the public gardens.

Even with all the travelling and running, Steve made time for family. He had two children, Ashley and Chris, from a first marriage that ended in the early ’90s. When the kids convinced him to get a dog, he fell in love with Sam, a golden retriever he took on his morning walks with his mom, Muriel, at Point Pleasant Park. As they walked, Steve would often take photos that he’d send by text to other family members, just to wish them a good day. “I loved waking up and getting a text in the morning,” says Linda. Steve was so hooked on texting his family and friends that he even gave some of them smartphones as gifts.

When family members were ill, Steve always went out of his way to visit, says his father Ron. “He came in every evening to see me,” says his sister Heather about the 18 weeks she spent in hospital after a car accident. Steve did the same for his wife, Colleen Pereira, when she was seriously ill. They had been together since 1994, but it was only in 2000 they decided to “join the families,” says Colleen, who moved in with Steve and brought her two children, Ian and Nicholas.

As if four children and a dog wasn’t enough, Steve would often invite nephews and nieces for a teddy bear picnic, a sleepover where he and the kids ate cake, played and read stories in their pyjamas. “He was the fun uncle,” says Heather. On any holiday, Steve always prepared pickled eggs, a favourite since he was a kid, as well as his masterpiece: a Yorkshire pudding everyone craved. “We didn’t even need a roast. We’d eat it with turkey or anything,” says Muriel.

As the years passed, Steve felt he needed to be more limber to keep up his running habit, so he started doing hot yoga. He even confided to friends that it had improved his running so much he felt fitter in his late 50s than when he’d started running in the 1980s.

On May 27, Steve was running in the Cabot Trail Relay again, this time doing a 19-km leg. Just 500 m from the finish line, where his 16 teammates were waiting for him, Steve collapsed and died of a heart attack. He was 58.