Born prematurely, doctors named him Mighty Mouse. He thrived as a salesman and by making others happy. 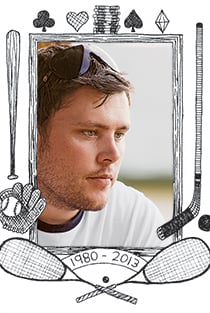 Jonathon David Wood was born in Lacombe, Alta., on May 22, 1980, to Roger Wood, a crane operator, and Lori Church, the owner of a marketing communications firm. Although he was born three weeks early, and weighed only four pounds, 13 ounces, he thrived so well that doctors nicknamed him “Mighty Mouse.”

Jon, as everybody knew him, was a precocious child. When he was four, Elton John’s ballad Daniel made him bawl because, as he explained to his mother, the lyrics made him think about the possibility of losing his own brother, Daniel, two at the time. Jon’s parents had divorced about a year earlier, and he grew up with his mother, brother and sister. After the divorce, each of his parents had two more children with new spouses, and Jon often played the father figure to his younger siblings. When he was in Grade 9, he insisted on taking his newborn baby brother, Eric, to show him off to his classmates.

In school, Jon was constantly misplacing and losing his assignments. He loved playing hockey, baseball and soccer. When he was 18, he won a sports scholarship to study marketing at Red Deer College. However, his entrepreneurial spirit took over and he quit part-way through his studies to learn about the restaurant industry. He went from being a dishwasher at a local restaurant to a server and finally, a manager. “He wanted to learn everything about the business,” says his mother.

Jon was always reading books about business, investing and real estate. He eventually went to work at his mother’s company, where he helped do the books for about 10 months. He also started investing in real estate and built an online poker site. His friend and business associate, Doug Beatty, says Jon once played 20,000 hands of poker in one month, playing multiple games simultaneously on two screens.

At 27, Jon began working with his uncle, Travis Gangl, at a financing company. “His best skill set was selling,” says Travis. “When you looked into his eyes, you believed he was honest and genuine.” Despite his love of doing business, Jon had his limits. He once declined to meet with a Calgary businessman who insisted on having drinks during their meeting because Jon did not want to drive back home from Calgary with alcohol in his system.

And while he loved to socialize with friends, he was conscientious about alcohol and the problems it could cause, says Lori. One night when, after imbibing too much, he kissed a girl who was not his girlfriend; he felt so guilty he attended a couple of counselling sessions at an addictions centre, although his mother says Jon did not have a drinking problem.

Kristin Fraser, a former girlfriend and close friend, says Jon was always going out of his way to make people happy. One morning, he happened upon a man whose car had broken down on the way to his first day at a new job. The man asked Jon if he could get a ride to the highway, hoping to hitchhike from there to Stettler, an hour east of where he was stranded. Jon volunteered to drive the stranger all the way to Stettler and ended up being two hours late to work himself. Kristin recalls another time when they were at a bar and Jon overheard two men talking about their career options. Jon joined the conversation, and at the end of the evening picked up their tab.

Jon’s tendency to try and be there for everybody sometimes meant he stretched himself too thin. His friends joked that Jon seemed to operate as if there were 40 hours in a day, and that the only thing he was ever early for was his birth.

Jon’s latest hobby was squash. He had started learning the sport from his uncle four years ago and was soon playing in tournaments across the province. On Nov. 1 he was playing in a local tournament he had helped organize. After he lost three games in a best-of-five, he spent the rest of the evening refereeing other matches and socializing with other players over a few drinks. Ever the stickler about not drinking and driving, after the courts closed he gladly accepted a ride with a sober player to join friends for pizza at a local pub.

After dinner, the group headed to a nightclub. Jon was the last to leave among his friends, at around 3 a.m. Tired and inebriated, he hailed a taxi and clambered into the back seat to go home. When the cab stopped at an intersection, a pick-up truck collided with it from behind. Jon died at the scene. He was 33. Police charged an 18-year-old man with impaired driving causing death.