A commercial fisherman, he also co-founded a whale rescue team. He loved the ocean and felt he had to give back to it. 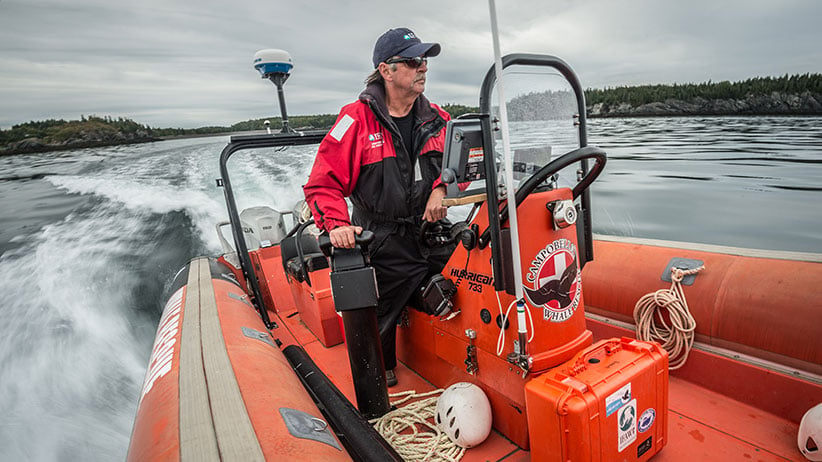 Joseph Michael Howlett was born in Lunenburg, N.S., on June 23, 1958 to Jim, a railway station agent, and Jean, a school teacher. He was the fourth of six children.

The family lived in Hubbards, N.S., a small village of 400 people, in quarters at the railway station. “There was no insulation, no furnace,’’ Joe’s sister Mary Ellen recalls. Joe’s bedroom was right above the railway tracks, along which freight trains transported ﬁsh day and night, but the kids were inured to the racket. “We thought it was a castle,” says Mary Ellen. “We played in the ofﬁce every night. Joe did his homework in the waiting room of the railway station.”

Joe was a natural athlete, but the sea tugged at him. At 16, he got a job working in the galley on a Canadian Coast Guard seismographic ship. That ﬁrst voyage, he went to Greenland for six months.

In the 1970s and ’80s, Joe continued working with the Coast Guard on a number of ships, including the icebreaker CCGS Louis S. St-Laurent. In 1986, Joe was on a Coast Guard ship visiting Campobello Island, N.B. While there, Joe attended a dance at the Legion where he met Darlene Brown, a ﬁsherman’s daughter. “We hit it [off] right off the bat,” says Darlene. “He was really good-looking,” she laughs, adding, “Joe was very charming. That’s pretty much what got me.” They stayed connected—“our phone bill was over $2,000 in one month,” notes Darlene—and married in 1987.

Joe left the Coast Guard to take up commercial fishing from Campobello. When herring fishing slowed, he ﬁshed for lobster and scallops. In 1994 Joe and Darlene had a son, Tyler. Darlene also had a son, Chad, born before she met Joe.

Joe had taught himself to play harmonica and in his younger days, if he was in a pub and saw a band playing blues, he’d pull a harmonica out of his pocket, jump on stage and join in, says Tyler. “He loved putting on a show like that … If my dad hadn’t been a fisherman, he would have been a performer.”

Joe was a best friend to his sons. They loved golfing together on the island’s links, says Tyler. Joe would also cook great meals for the family, like his signature lobster and mac & cheese. He refused help in the kitchen, and often would retire to the living room where he’d happily watch his family dine. “It was a way he showed his family he loved them,” says Chad.

Joe’s easy charm helped him net support from local fishermen when, in 2002, along with Mackie Greene, a whale-watching tour operator, they co-founded the Campobello Whale Rescue Team to help free whales ensnared in fishing gear. When Joe was herring fishing, whales often gathered around his boat. A nature lover who grew up watching Jacques Cousteau documentaries, he fell in love with the massive cetaceans.

“He just felt that he had to give something back, because he was taking from the ocean,” says Darlene, about the rescue team. David Anthony, a close friend who ﬁshed with Joe, joined the team in 2003. “Joe was really passionate about the ocean and creatures in it,” says David. He convinced islanders that, in addition to saving whales, the team’s work would enhance the fishing industry’s image.

Over the past 15 years Joe participated in nearly 30 whale rescues, often as a line cutter. The crew of three to five rescuers would zip out from the Bay of Fundy on their 26-foot Zodiacs at a moment’s notice. As fishermen, explains David, “we were familiar with the lines and fishing gear. We were a natural fit.” The group’s focus is on endangered North Atlantic right whales, but it has also saved minkes, fins and humpbacks. Humpbacks, says David, are calm and seem to know the team is there to help. “But the rights can be defensive and aggressive,” he adds. After any rescue, says David, there’d be “a lot of hooting and hollering.”

On July 10, Joe was captaining the Shelagh, a Canadian Whale Institute research vessel that was surveying the increased number of right whale deaths in the Gulf of St. Lawrence. He’d already helped disentangle one right whale when a request came to rescue yet another ensnared in snow crab gear near Shippagan, N.B. Just after Joe cut that second whale free and gave a grinning thumbs up to crewmates the whale suddenly dived, sharply arching its tail up and over its own back, and striking Joe hard with the topside of its flukes. He was killed instantly. Joe was 59.