A lifelong Liberal, he only faced two opponents during more than 20 years as a popular town councillor 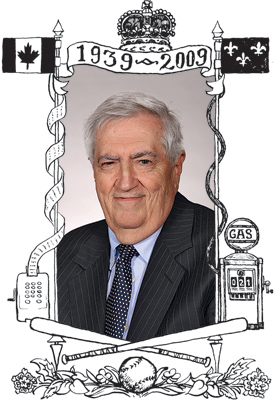 Joseph Pierre Adélard Lambert was born in Joliette, Que., on Nov. 21, 1939, to Antonio Lambert, a tailor, and Yvonne Poirier, a secretary. Known as Pierre, he worked throughout his high school years, at one point as the projectionist at Cinéma Venus, Joliette’s movie theatre. He liked movies but liked being busy even more. Struck by the young man’s work ethic, Roger Cloutier, who ran the local farmer’s co-op, taught him the rudiments of running a business. Soon, Pierre was the co-op’s accountant.

He met Lise Lasalle at a baseball game in 1961. Baseball enthralled Pierre, but he noticed Lise’s green eyes, brown hair and (soon enough) her remarkable calm in the face of his bluster; they married in September 1962 and had three children together: Martine, François and Bruno.

Pierre left the co-op in 1975 and opened his own accounting firm. He was also president of the local chapter of Quebec’s construction association. This, his children joke, was a matter of convenience; their father could hardly hammer a nail into the wall. (He also owned a gas station, yet could barely pump his own gas.) His obsession was politics, and Pierre was a partisan among partisans whose red glasses, ties and shirts advertised his allegiance to the Liberal brand. “If you dressed a pig in red my dad probably would have voted for him,” Martine says.

He became an organizer for both the provincial and federal Liberals. His leanings made him a rare bird in Joliette, long represented federally by the Conservatives and the Bloc Québécois afterwards. It was also the home riding of long-time Péquiste minister Guy Chevrette; Pierre spent years trying to find a Liberal who could unseat him,always in vain. During the 1980 referendum he worked for the No campaign, enlisting Martine to pass out buttons at her high school. He was so ecstatic at the victory that he let his daughter smoke in front of him at the after-party. (He came to regret this; Martine smokes to this day.) His own political ambitions were dampened by Lise, who was unwilling to lose her husband to Ottawa or Quebec City for a large part of the year. The stress, she said, would kill them both. Being a municipal councillor was an honourable compromise: Lise would keep her sanity, while Pierre could still keep the long-standing tradition of watching the Montreal Expos with his kids. He won a council seat in Notre-Dame-Des-Plaines, a neighbouring village to Joliette where the family lived, by acclamation in 1987. In 1992 he easily defeated his first opponent; he would only be challenged once more in his political career.

No one was ever indifferent to Pierre. Those who weren’t put off by his federalist sympathies (or his Fred Flintstone appearance and intensity) were often touched by his uncommon tenderness. He gave Alexandre Cantin, who lived in an apartment block Pierre owned and in whom Pierre saw a Lambert-like propensity to stay busy, his first job. He then helped him find work in Joliette once he graduated. “You are the most important person in my life,” Alexandre would later write.

Lise succumbed to breast cancer in 2004, and Pierre lost his life’s anchor and council. He stopped eating at home, often favouring caisses-croûte (snack bars)—or worse—for his meals. “My father was the only person I knew who could eat breakfast at a dépanneur,” says his son François. In Joliette, he often held court at La Belle Excuse, the local restaurant, whose owner would call him whenever chopped veal liver was on the menu. He guzzled Coke and drove around in his Cadillac with Shaggy, his 110-lb. Bouvier, happy but unhealthy. In 2007 he suffered an acute diabetic attack (a normal blood sugar level after a meal is between five and eight; when doctors tested Pierre’s it was at 57). He promised his kids he’d lay off the Jos. Louis cakes and try sugarless Coke.

Earlier this year, Pierre learned that Jean-Guy Forget, a former police officer, would run against him in the November elections. It was a tight race—voters were unhappy with the pace and quality of road work in town—and Pierre campaigned with even more intensity than usual. His knees hurt, he was tired all the time and, as he found out on the night of the election, the results were very close. At 10:25, François called Pierre and found him to be a nervous wreck. Minutes later, though, the good news: Pierre had won by 20 votes. Overjoyed, he drove to the community centre, where he thanked his well-wishers and volunteers. To the assembled journalists he acknowledged the close vote and said he would work for all constituents. He then suffered a heart attack and collapsed. No one could revive the freshly re-elected member for Notre-Dame-Des-Plaines. He was 69.