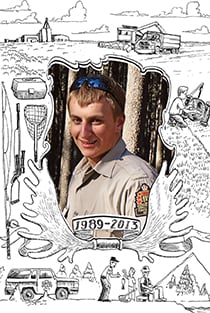 Justin August Knackstedt was born in Saskatoon on Dec. 6, 1989, to Howard, an agriculture supply store manager, and Lori, who worked various part-time jobs while raising the couple’s three children. Justin and his younger siblings, Trina and Dawson, grew up next door to their grandparents on a 160-hectare farm on the old townsite of ?Wimmer, east of the city, with sweeping prairie views of canola fields that glowed yellow in the summertime.

Howard and Lori married in 1992, with two-year-old Justin serving as ring bearer in a little red suit with a matching vest and black tie. They called him their “little man” because of his serious personality. “He never was a little kid who played with cars and trucks,” Lori says. Instead, he followed his grandpa and uncle around, taking rides on the tractor, mowing the lawn and messing around with engines. By age six, his maturity was almost startling: “If I couldn’t get the lawn mower to start, he’d troubleshoot with, ‘Mum, I think it might be the carburetor!’ ”

The outdoorsy family was also extremely close-knit. “There’s not too much we ever do apart,” says Howard, from camping and fishing to riding dirt bikes and snowmobiles. Howard, an avid hunter, took his kids out “pretty much as soon as they could walk and be quiet enough to sit still,” and taught them to “be a voice for the animals and their habitat.”

Growing up, Justin loved working on the farm. His favourite time of year was the fall harvest, when he’d help neighbouring family friends by combining and driving the grain truck. When he got his driver’s licence at 16, Justin would drive Dawson, 10 years his junior, wherever he wanted to go in his 1994 Chevy hot rod. Protective of his younger sister and cousins, Justin was known for walking up to any guy who talked to his sister to introduce himself. “I might not be sitting right beside him, but I knew his eyes were on me all the time, watching,” Trina says with a laugh.

He graduated from Quill Lake School in 2008, and worked construction through the summer before heading out to Fort McMurray, Alta., to work in the oil sands. The money was good, but Justin’s heart wasn’t in it. Knowing he belonged outdoors, he enrolled in a resource management program at the Saskatchewan Institute of Applied Science and Technology’s Woodland campus. After graduating in 2011 with a diploma in environmental resource law, he landed a job at Cypress Hills Provincial Park as a conservation officer. “As soon as he put his uniform on, he became so serious,” says Lori.

He was a conservation officer for “all the right reasons,” says Kerry Wrishko, Justin’s manager. “Because he was a hunter and fisherman, he recognized what we have in Saskatchewan and made it his life’s mission to ensure those resources are protected.” Living away from his family was hard, but Justin called home every day. He frequently visited Trina in Prince Albert, crashing on her couch and watching Wild Justice, a show about California game wardens. When Justin visited the family farm on weekends, Dawson would run out to the yard to meet him at his truck. He always made time to help out on the farm and, of course, hunt: In the fall of 2010, he shot the third-largest moose in the history of the province—its antlers now greet visitors to the Knackstedt home. Last summer, during his second year at Cypress Hills, Justin took Dawson for a ride-along in his work truck. “As soon as Dawson got home, he said, ‘I’m going to be a conservation officer when I get older,’ ” Trina recalls.

In May, Justin was transferred to the Saskatoon area, working in Blackstrap and Pike Lake provincial parks. His knowledge of hunting and aptitude for conservation law impressed his managers, who recruited him for undercover work. Justin loved the thrill of posing as a hunter to accompany poachers on trips, and relished busting traffickers in illegal fish and wildlife.

On May 31, while en route to Blackstrap Provincial Park, Justin and his partner pulled over at the scene of a car crash just south of Saskatoon and offered to help RCMP divert traffic. Down the road, the driver of an SUV, allegedly drunk and fleeing police, sped through traffic toward the accident site, hitting Justin and leading RCMP on a chase before rolling into a ditch near Saskatoon. Justin died on the side of the highway. He was 23.