The youngest of three superstar sisters on the moguls in Sochi, Dufour-Lapointe came out on top 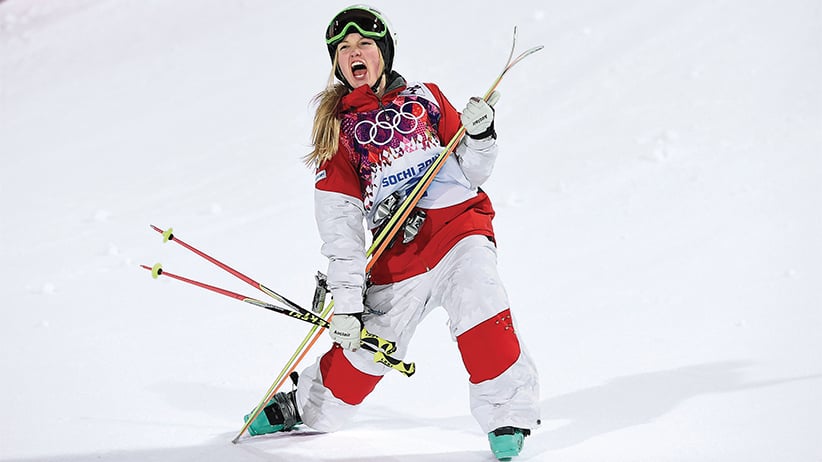 After climbing onto the podium to accept her moguls gold in Sochi, Russia, last February, Justine Dufour-Lapointe grabbed hold of her 22-year-old sister, Chloé, the event’s silver medallist. “I was in shock,” the 19-year-old Montrealer explained. “I saw Chloé and I felt calm. Holding her hand, I knew it would feel more like home.”

Home, for Justine, is family. Together with their 24-year-old sister, Maxime, the 12th-place finisher in Sochi’s moguls event, the telegenic trio make up three-quarters of the country’s moguls team. Poised, genial, fashion-forward and so clearly full of love for one another, Canada’s first family of skiing stole both slopes and hearts in Russia. After their podium embrace, U.S. media, from NBC to CNN to People, were clamouring for a minute with them—even though their one-two finish relegated American Hannah Kearney, the event’s runaway favourite, to bronze.

Les trois soeurs Dufour-Lapointe, or 3SDL, as they cannily branded themselves ahead of the launch of their new clothing line, Après-Ski, are practically inseparable. The family’s palpable closeness can be traced to a decision their parents made when the girls were babies: “To be close to them,” says their mother, Johane Dufour, “to watch every single moment, whether they had success or pain.” Dufour, who has three university degrees, left her career to care for them.

But the girls’ parents reject the notion they had to forfeit anything for their daughters. “Sacrifice, I don’t think, is the right word,” their father, Yves Lapointe, a Montreal engineer, explains. “ ‘Choice’ is much better. We took this great decision and that’s what brought us here.”

The trio embarked on their Olympic journey almost by accident. Skiing was simply a way to pass the long, cold Quebec winters. The Dufour-Lapointes lived to sail, and spent every summer on their boat, l’Excessive. Then, one day, when Maxime was 10, she got hooked on moguls, entranced by the jumps. Chloé quickly followed her into the sport, then Justine. “When you’re the youngest, you just want to follow your older sisters, because you think they’re so cool and so beautiful,” she explains.

Soon, the family’s life revolved around the sport; l’Excessive was sold to fund the intensive coaching that skiing required. Most summer weekends, the family crossed the border, to Lake Placid, N.Y., where they camped in a tent so the girls could complete their off-season training.

Growing up, the girls were ultra-competitive. It was excruciating “when one came back from a competition shining, and the others weren’t,” says Dufour. “We couldn’t say, ‘Oh, it’s extraordinary!’ No, we had to think of the other two.” She used to tell the girls they were a triangle, “and all the angles should be equal to make a stable triangle.”

On the slopes, Justine, the outgoing, fun-loving, family baby, is fast and fearless. Chloé and Maxime, meanwhile, have long been known as two of the more skilled and stylish jumpers on the World Cup circuit. But Olympic gold requires excellence in both areas: a rare combination of high-flying racing skill and judged technique.

Justine, in the lead-up to Sochi, developed the most complete package, and found herself nipping at the heels of Kearney, one of the most dominant freestyle skiers of all time. In Sochi, just after the start of her super final race, Kearney made a tiny mistake, bobbling the landing on her second jump. Justine saw her opening.

“I had this fighter inside of me,” she said, describing her thoughts ahead of her final run. “And I thought, ‘You’re a fighter, you’re a tiger. This is my moment, this is my day. I will own that moment for myself and I will ski for myself.’ ”

And she did. For 50-odd seconds, Justine stood apart from her older sisters once and for all, attaining something close to perfection, as she flawlessly attacked the 247-m slope, nailing her signature, 360 grab, before returning to their familiar embrace at the bottom of the hill.