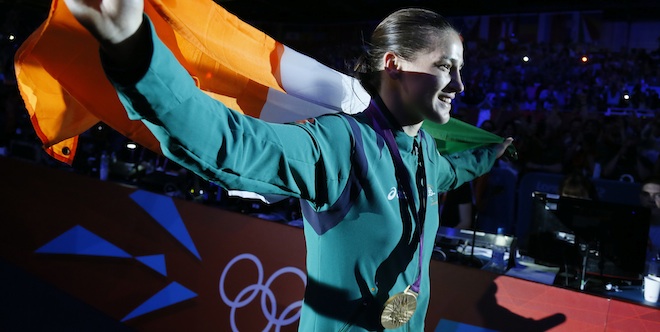 It might have been London, but it wasn’t a home crowd. Even when Great Britain’s Nicola Adams made history, winning the 51kg gold and becoming the first Olympic women’s boxing champion—the host nation’s 24th gold of the Games—the cheering was simply loud.

Nothing compared to the welcome that awaited the evening’s main attraction, a red-headed 26-year-old from the town of Bray, south of Dublin. When Katie Taylor strutted on to the floor of the Excel Centre, Thursday, the stands shook, and the full-throated roar went from freight train to jet plane to rocket, then beyond. Seeking to become Ireland’s first gold medalist since the 1996 Atlanta Summer Games, the four-time world lightweight champion has gone from relative unknown to omnipresent superstar in her native land over the course of the week. All over the country offices and shops closed early so that people could watch her final bout against Russia’s Sofya Ochigava. And even if the Brits have been having a tough time getting tickets to Olympic events, somehow the Irish fans didn’t for this one. The arena was one big sea of green shirts waving the green, white and orange tri-colour.

They chanted her name, and clapped four times, football style. They stamped their feet. And they sang “Olé, Olé, Olé” with even more conviction than Habs fans. (Probably with good reason—Taylor has better defense.)

The fight was closer than they wished. After winning the first round 2-1, Taylor lost the second 4-3. The judgement was fair, but the boos rained down nonetheless.

In the third, the 5-foot-5 boxer landed a solid right cross to Ochigava’s chin, and for a moment it seemed as if the Russian might go down. When the bell rang they scored it 4-1 for Taylor, giving her a 7-5 lead.

In the fourth and final round Taylor almost sent herself to the mat, stumbling over her opponent’s leg after throwing a wild haymaker. There was lots of clinching and not many punches, but it didn’t dampen the crowd’s enthusiasm. Still, they held their breath waiting for the final decision. It took a good long while before the ring announcer finally confirmed their most fervent wishes. Taylor had won 10-8.

Pandemonium is the only word for what followed. Men cried. Women screamed. Everyone kissed. Taylor sank to her knees on the canvas, clenching her gloves to her head, then bounced back up to hug her father, Peter, a former boxer himself, and now her trainer. An Irish flag appeared from the stands and she wrapped it around her shoulders for the shortest of victory laps inside the ropes.

She was Olympic champion.