Kent Monkman and the making of a masterpiece

Paul Wells: How the latest works of one of Canada's greatest living artists landed in the Great Hall of the Met in New York City 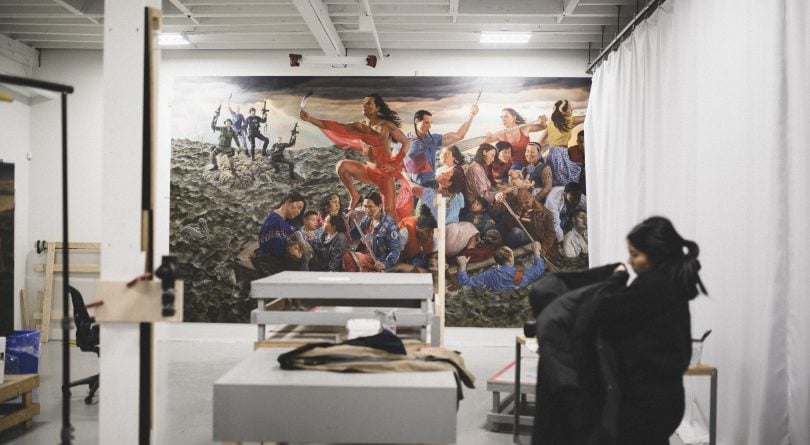 Monkman's studio, before the launch of his Mistikôsiwak (Wooden Boat People) exhibit at the Metropolitan Museum of Art in New York (Photograph by Jalani Morgan)

The studio Kent Monkman has used for two years, roomier than the one he used before, is a nondescript single-story building, flat fronted and unmarked, on an otherwise residential street just below Eglinton Avenue West in Toronto. On a recent weekday afternoon, more than a dozen people were working in the studio, most on scaffolds built next to two canvases the size of garage doors, the rest seated at a bank of computer workstations.

The main focus of attention amid the bustle was those two big canvases hanging at opposite ends of the studio’s main room. Together they form the diptych that was unveiled this week in the Great Hall of the Metropolitan Museum of Art in New York City. It’s hard to imagine a more prominent perch for a new commission anywhere in the art world. Monkman has seized the moment with characteristic ambition and irreverence.

A 2017 Globe and Mail profile called Monkman, a soft-spoken artist of Swampy River Cree, English and Irish descent, “about as famous as a living painter can be in this country.” The Met showcase gives him an international showcase. So it’s fitting that the themes he tackles for this commission, and the subjects that inspired it, are global.

Together the two paintings are entitled Mistikôsiwak, which translates from Cree as The Wooden Boat People. It’s a term Monkman’s ancestors gave to the people who arrived in wooden ships from France, and then from elsewhere in Europe. Vivid and seething with human figures, the paintings depict two mythologized moments. First, the arrival of newcomers from overseas and their interactions—by turns uncomprehending, violent or erotic—with the Indigenous populations. Second, the casting away of the first populations in a refugee boat so packed with passengers it evokes both news photos of the 2015 migrant crisis in the Mediterranean and Emanuel Leutze’s 1851 painting Washington Crossing the Delaware, which hangs in the Met not far from the new work.

There are more than 50 human figures in the two paintings, some repeated or echoed in both. The work is classic Monkman: big themes, countless details. Vividly depicted in meticulous realistic detail, with bright colours arrayed with an eye for the balance and proportion of classical composition. At once respectful of art history and cheekily subversive.

The most prominent greeter in the first panel and the lead castaway in the second is a figure who’ll be familiar to Monkman aficionados: Miss Chief Eagle Testickle, the artist’s gender-fluid, time-traveling alter ego. More than 50 other figures populate the rest of the work. Almost all are inspired by figures from earlier artworks. Most of the inspiration comes from the Met’s own collection. Months of archival research preceded Monkman’s first sketches.

“When I thought about the commission, of course I thought about New York being this portal for immigration to North America,” Monkman told me. “So many people have come to the continent through New York.

“And then I knew that they would be hanging in the Great Hall. And the great hall is the foyer of the Met. So here is this institution that holds collections from all around the world, and millions of people from around the world come in and out through the Great Hall. So it was a way of talking about entrances and exits. It was a way of talking about migrating populations. With this project I wanted to really ask people to think about how migrating populations, such as the settler populations who came here, displaced the first people. So this project really became about migrations and displacements.”

Then came the deep dive into the Met collection. “It was an incredible collection to dig into, obviously. Some of the first things I went to were representations of Indigenous people made by settler artists in the 19th century. There were a few of those, actually. Thematically they kind of reinforce ideas of the time. One of the main ones that I’ve responded to in other works is this obsession, almost, with Indigenous people as being a vanishing race.” 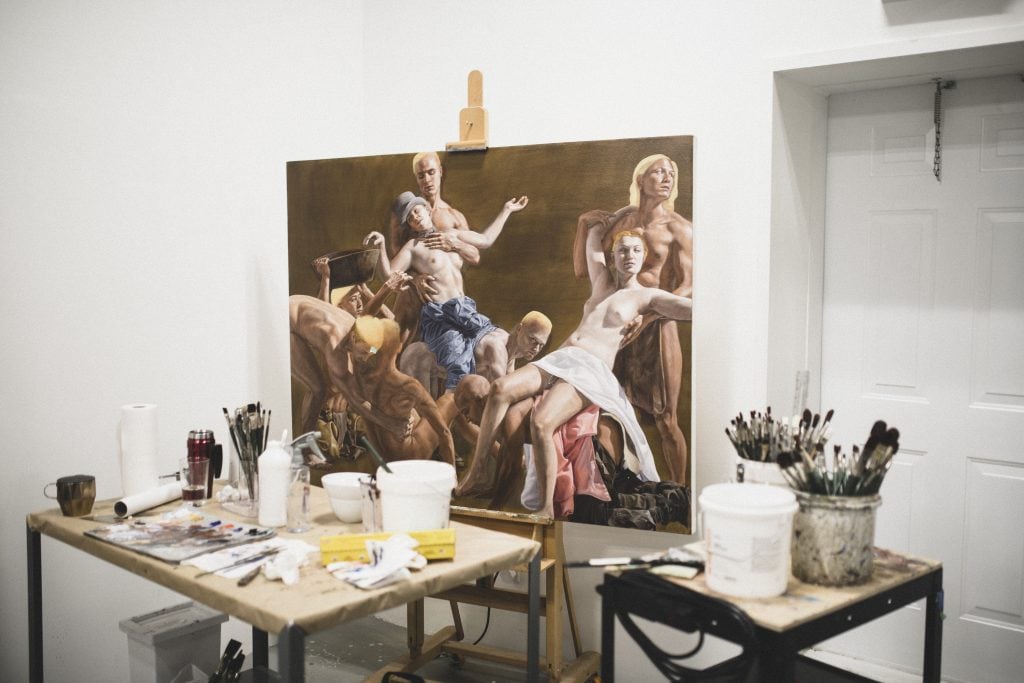 The dialogue with the work’s surroundings is deeply layered, sometimes earnest, often mischievous. Or Miss Chief us. A Pocahontas figure has been corrected to look more the way a high-status Powhatan girl would actually have looked at the time. A Pilgrim arriving from Europe wears a buckled stovepipe of a sort that the actual Pilgrims never wore, except in inaccurate 19th-century paintings. In Monkman’s work, the past means what he chooses it to mean, neither more nor less.

It will be odd if the Met doesn’t acquire the paintings for its permanent collection, so wedded are the canvases, in trickster fashion, to their place. That decision will come later. That they exist at all is down to the ambition of the Met’s new director, Vienna-born Max Hollein, who arrived in 2016. Despite his roots and long career in the heart of Old Europe, Hollein has shown he is determined to build a Met that’s globally conscious, at ease with the latest currents in contemporary art, and thoughtful about its own history and that of the art in its collections. A history he’s in no mood to exempt from critique and re-evaluation.

Since September, four bronze sculptures inspired by African queens and made by the Kenyan-born artist Wangechi Mutu have adorned previously empty niches built into the long façade that faces Fifth Avenue. Monkman’s paintings, which on the current plan will hang until April, are the second step in Hollein’s commission program. More contemporary commissions, as yet unannounced, are planned.

These paintings came together quickly. There was no paint on the canvases before June. They were completed, except for varnishing, at the end of November. In between, it was all hands on deck at the bustling Monkman studio.

Monkman had no assistant until 2006. “My friends were watching me flounder with just the volume of stuff I had to do on my own as an artist. Eventually you just can’t do it all. I would spend half a day just answering emails and then run to the art store. By the time I got back I was exhausted. I’d have to start painting at 4 in the afternoon.  So eventually you just figure out how to delegate. Trust is important.”

Now he employs 10 painters and seven support staff. The model is ancient. Renaissance artists worked the same way. Leonardo da Vinci came up in Verrochio’s workshop, as did Botticelli. “All the painters here are getting all of their 10,0000 hours”—an intensive, high-stakes course in applied realist painting—Cindy Esteves, Monkman’s director of painting, said. “You really see how everybody grows. Sometimes I’ll put a painter on something and they’ll say, ‘I’ve never painted a sky before.’ You go ‘right, let’s go.’”

Models recruited with Facebook casting calls posed for photographs of each element in the work. The photos form the basis of reference paintings, which serve as touchstones for the full-scale canvases. Support staff gathered props and did archival research. The boat for the second painting came from an ad on Kijiji. “It was a couple thousand bucks and it was a rotten boat,” Monkman said. “We bought it in the winter, we didn’t know how badly rotted it was. But it served its purpose.”

Just as in Verrochio’s time, a busy studio can work on more than one project at once. Two of Monkman’s painters were touching up a nearly-complete painting, a private commission from a lawyer in northern Ontario. “He thought, ‘Well, why don’t we put Confederation on trial?’ Monkman said. So the painting shows John A. Macdonald, Pierre Trudeau, Stephen Harper and other figures on trial. “They’re being judged and they have their punishment being administered by Miss Chief, who is administering the praying hands butt plug to each of them.”

Monkman has done video, installations, performance pieces, but these big, historically informed and subversive works of realism are his most identifiable work. He came late to realism, in around the year 2000, near the end of his first decade as a professional artist. I own one of his earliest paintings, a semi-abstract depiction of prairie wildflowers. He doesn’t disown that earlier period, but at a certain point he just decided he needed to be a lot more specific.

“As an Indigenous person. I’m an outsider looking at this trajectory of Western art history—and I see that they threw out their best stuff,” he said. “Imagine if all of a sudden all orchestral music was thrown in the garbage and all you could listen to was, you know, jazz or experimental music.”

Might he one day turn away from realism, just as he turned toward it two decades ago? “Go where, though? I’m working with the most complex vocabulary of painting that there is, I think. So you can only really improve within that. And as you can see with how my studio operates, this is a very complex operation here. There’s many stages to how the paintings are made and the end result is something we’re very proud of. It’s a very difficult thing to do and there aren’t many people doing it, if any, in this country, working at this scale. So I feel like there’s a special place for my vision and what I’m doing.”