Once shy, he developed a love of heavy metal music and tattoos. He was proud to land a job building Canada’s tallest condo tower. 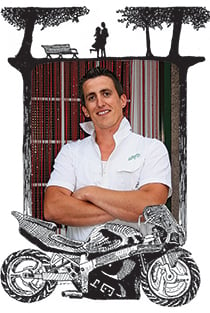 Kevin Barreira Raposo was born Aug. 11, 1984, in Hamilton, to Portuguese immigrants Humberto, a roofer, and Alzira, a cleaner. He was the third of five siblings and the first of two boys.

Kevin was a quiet baby, and an even quieter child. When he was in Grade 1, his teacher phoned Alzira, concerned that he couldn’t hear properly. She took him to see a specialist, but there was nothing wrong; he was just shy. He was also easy to please. Alzira once took Kevin shopping to splurge on an expensive toy for him, but he had other ideas. “He comes up to me with a car that costs a dollar,” she says. “It’s not what I had in mind, but he fell in love with that car.”

Living with four siblings could be chaotic at times, but Kevin was a neat freak. He kept his clothing separated by colour; his cologne bottles lined up according to height. His younger sister, Sabrina, would often sneak into his room to play video games but “if he ever caught me, he’d get so mad,” she says.

As Kevin grew older, he came out of his shell, playing hockey, riding bikes and swimming, often with his best friend from school, Filipe Ferreira. During a game of hockey on the Hamilton Harbour, Kevin, 14 at the time, decided to chase after a group of ducks. He fell right through the ice. “I ran after him,” says Filipe. “Half of his body went in.” Filipe managed to pull Kevin out and the two continued playing, wet and freezing.

The pair also shared a love of cars—Kevin would spend hours souping his first ride, a blue Hyundai Tiburon, in Filipe’s driveway, leaving a trail of parts in his wake.

After high school, Kevin took a job roofing before moving into high-rise construction. In 2008 he joined the concrete company Verdi Alliance and, just over a year later, started working on Toronto’s Aura project, a 78-storey tower set to be “Canada’s tallest condominium.” He didn’t necessarily love the work but was proud to be part of such a high-profile project.

Kevin also developed a fascination with heavy metal music and ominous tattoos; a full-sized dragon covered the right side of his chest. He had his first motorcycle, a Kawasaki, airbrushed with the words “Death is imminent” and the image of a large skull. He got a ball python, Eve, for a pet because, says Sabrina, he wanted to be different.

In May 2011, he began chatting with Ashley Bley, a 26-year-old McMaster University student, on the dating website Match.com. A month later, the couple met at a Bath and Body Works in Hamilton, where Ashley worked. Upon spotting the five-foot-six, green-eyed blond, he whispered to one of her coworkers, “She’s so beautiful.” Later that night, the couple went to a park for their first date. Kevin played a few slow songs on his iPod. “He took my hand and we danced,” says Ashley. He was about half a foot taller than her, and as she looked into his eyes she felt a connection. “I said, ‘You have made me so happy.’ ”

They began living together two months later; first with Kevin’s sister Dianne and later in their own downtown loft. A picture frame inscribed with the words “and they lived happily ever after” hung above their bed. Recently, Ashley was transferred to Bath and Body Works’ St. Catharines location and promoted to store manager. Conflicting work schedules meant the couple cherished what little time they had together. This summer, they picked out a diamond engagement ring— Kevin planned to propose to Ashley on her birthday, Sept. 23. A few weeks ago, they were preapproved for a mortgage and were eager to buy their first home and start a family. “He wanted a daughter so bad,” says Ashley. The couple had already agreed on the name Laci.

On Thursday, Aug. 22, Ashley arrived home just after midnight to find Kevin asleep on the couch. “I laid beside him and we were just chatting about life,” until Kevin had to leave for work at 3 a.m. “He was happy,” she says.

At around 10 a.m. the next day, Ashley texted Kevin, asking him to call her. “I told him how much I loved him and said ‘I can’t wait to see you for dinner.’ ” Kevin was working on the 70th floor of the Aura tower. Just before noon, he fell, tumbling almost 55 floors onto the rooftop of an adjacent building. Why his safety harness didn’t catch him remains unclear. Kevin was pronounced dead at the scene. He was 29.