He was a dedicated cyclist and doting father. A warrant officer, he served in Bosnia, Kosovo and did three tours in Afghanistan. 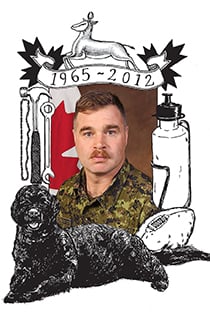 Kevin Roderick Malott was born in Gimli, Man., on Oct. 24, 1965, the second of two children born to Roderick, an air traffic controller in the Royal Canadian Air Force, and Anne, a homemaker who cared for Kevin and his older sister Kim.

Roderick’s military career kept the family on the move: from the Canadian Forces Base Lahr, in what was then West Germany, to Cold Lake, Alta., then on to North Bay, Ont. When Kevin was in Grade 12, the family moved to CFB Trenton. Kevin, who was just two credits shy of his high school diploma, left North Bay’s Widdifield Secondary School to begin a mechanic’s apprenticeship in Trenton, Ont. Although he loved working on cars and motorcycles, he hated busting his knuckles, and decided to follow in his father’s footsteps. In 1985, Kevin enlisted in the Canadian Forces; two years later he was posted to Lahr with the 8th Canadian Hussars (Princess Louise’s).

It was there that “Kevin started to come into his own as a soldier,” says his friend, Master Warrant Officer Gerry Olsen, who competed with Kevin in military fitness competitions. Kevin, who played rugby and hockey, was a “machine,” says Gerry: six foot four, and fit as a horse.

In the wee hours of Jan. 1, 1988, Kevin met a German pathology student named Simone. After realizing they were the same age—born just three weeks apart—they chatted until 7 a.m. Soon they were taking weekend trips together: to the lakeside city of Überlingen, then to Strasbourg, France, and Basel, Switzerland. They were just friends—or so Simone thought. “The next thing I knew,” she says with a laugh, “he showed up at the front entrance of my night school with a bouquet of flowers,” searching for her among the throngs of students streaming out of the building, calling out her name. Kevin was a hopeless romantic: on a ski vacation, he wrote “I love you” in the snow on a frozen pond “for the whole resort to see,” says Simone. “What a sight to wake up to.”

They married in Germany in 1990. Kevin, who had three nephews, longed for daughters, and soon got his wish: Sarah was born in 1991, followed by Jennifer in 1994. Kevin adored his three frauleins, as he called them, and his massive, black Newfoundland dog, Conan. Beyond his family, his passion was cycling. He’d been hooked ever since Simone introduced him to the sport, and cycled up to 100 km a day with his racing team. Indeed, “the first thing he bought Sarah was an Italian bicycle jersey,” Simone says with a chuckle—“for a six-month-old baby.”

When the base at Lahr closed in 1994 after the reunification of Germany, Kevin took a posting with the Royal Canadian Dragoons at CFB Petawawa, and the family relocated to Chalk River, Ont.—close enough to the base that Kevin could cycle to work every day. He did tours in Bosnia and later Kosovo, and did three six-month stints in Afghanistan. Initially he was part of a reconnaissance patrol searching for Taliban fighters—it was dangerous work. In 2007, he joined a counter-IED team; whenever an improvised explosive device was found or detonated, the team would try to track the source of the bomb’s parts. Kevin didn’t need to keep returning to the front, but felt duty-bound. He told Simone he wouldn’t be able to bear it if a younger, less-experienced soldier died in his place.

After watching Sarah graduate high school in 2009, Kevin enrolled in night school to obtain his high school equivalency certificate; he won the award for the highest mark in his class. Recently he’d started spending every lunch hour in the gym, training with Sarah, who was preparing for the RCMP fitness entrance test.

Through it all, his passion for cycling never wavered. Almost every day, rain or shine, he was on his bike. “He couldn’t be stopped,” says Simone. On a wet, windy Sunday in early September, Kevin burst through the front door after cycling to Algonquin Provincial Park: for several hundred metres, he explained, a timber wolf had run alongside him. “He was happy as a three-year-old on Christmas,” says Simone.

The next morning, Sept. 10, Kevin set out on his daily 20-km ride to the base in Petawawa. Just after 6:30 a.m., Warrant Officer Malott, who’d survived multiple tours of the dangerous highways outside Kandahar City, was struck by a tractor-trailer on a lonely stretch of Highway 17; he was pronounced dead at the scene. He was 47.