A farm boy from birth and an inveterate family man, he had finally found time for travel and new adventures 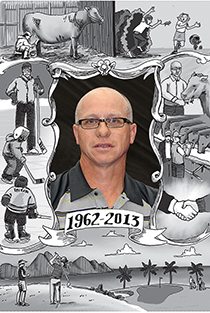 Kevin Wayne Wadham was born Sept. 16, 1962, in Uranium City, Sask., the third and youngest child of Keith, a farmer, and Lillian, a housewife. When Kevin was 2, his father bought a cattle and grain farm in Virden, Man., and the family moved.

Kevin, his four-year-old sister, Patricia, and five-year-old brother, Brian, were quickly immersed in the farming world, joining the 4-H club. Though Kevin loved cattle, he despised horses. When the three kids took part in an annual musical ride, his gelding, Spitfire, would always buck unexpectedly. To take revenge on his siblings, who were much better on horseback, he would hide in bushes and scare them while they were riding, or pick up rats and chase the kids around. “He was a brat,” says Patricia. “Most of the time, we’d beat him up.”

Stubborn and blunt, Kevin relished arguing, sometimes getting under his mom’s skin just for kicks. But the Wadhams were tight-knit, often taking camping trips together and travelling for the boys’ hockey games and Patricia’s figure-skating competitions. Kevin was devoted to hockey and played throughout school, including when he went to college in Fairview, Alta., in 1980.

After graduating, he stayed in Fairview, landing a job with food producer Cargill. In 1989, he moved home to help his dad with the farm, and again joined a local hockey team, the Virden Oilers. After a game one day, Kevin headed with the other players to the Central Hotel bar, where he locked eyes with Candice Walker, a slim, curly-haired blond. He was 26; she was 19. Candice, a single mom to a two-year-old boy named Dustin, bought him a drink. “He just had the kindest, friendliest face,” she says. He thanked her, but it was a few days before he asked her out. A year later, they married in a small ceremony in Brandon, Man.

Kevin adopted Dustin and the couple had a son, Kaden, in 1993. The family moved into Kevin’s childhood farmhouse in Virden, an old, three-storey brick building, after Keith and Lil retired. Kevin was a doting father and coached both of his boys’ hockey teams. Kaden, especially, was a daddy’s boy, says Candice. The father and son bonded over sports and their trucks, “boy stuff,” and Kevin was the first person Kaden would turn to for help.

In addition to farming, Kevin started working for JM Beef Consulting, a company that plans nutrition regimens for livestock. He took over the business in 2006. Over the years, Kevin’s business tripled in size. Many clients came to consider him a close friend, calling him for both personal and professional advice. He also had a well-deserved reputation around the community for being generous. He’d pay out of pocket for extra ice time for the kids’ hockey teams, or pick up the tab for their jerseys. “If you needed to borrow something, or drive somewhere or move, he would be there to help,” says Patricia.

Although he was busy with work, family was a priority for Kevin. In 2010, he and Candice accompanied their niece, Caleigh, to the World Junior Figure Skating Championships in the Netherlands when her mother, Patricia, was unable to make it. It was the first time either of them had left North America. And when Kevin’s brother, Brian, who lived in Winnipeg, was diagnosed with terminal cancer in May 2011, Kevin visited him often and helped get his affairs in order, promising to look after things when he was gone.

Every Sunday in summer, Kevin and Candice golfed with their boys, and with JM a success, Kevin and Candice were able to do more travelling. Last May, they spent three weeks in Hawaii; the highlight was golfing PGA courses, but Kevin’s first time swimming in the ocean was a close second. The couple spent New Year’s 2013 with Patricia and her husband, Howard, in Las Vegas, where they did a little gambling and took in a Cirque du Soleil show. “We had lots of fun,” says Candice. “When the kids were younger, it was all about them and it was just starting to become our time now.”

On March 4, a miserable, stormy Monday, Kevin was on the computer, working from home. Just before 2 p.m., he got a call from Kaden, whose snowmobile was stuck in a ditch along the Trans-Canada Highway, two kilometres east of Virden. Kevin pulled up in his truck and hopped out, attaching a towrope to his son’s vehicle. When he stood up, another snowmobiler speeding over a hill crashed into him. He died in hospital shortly after. He was 50.