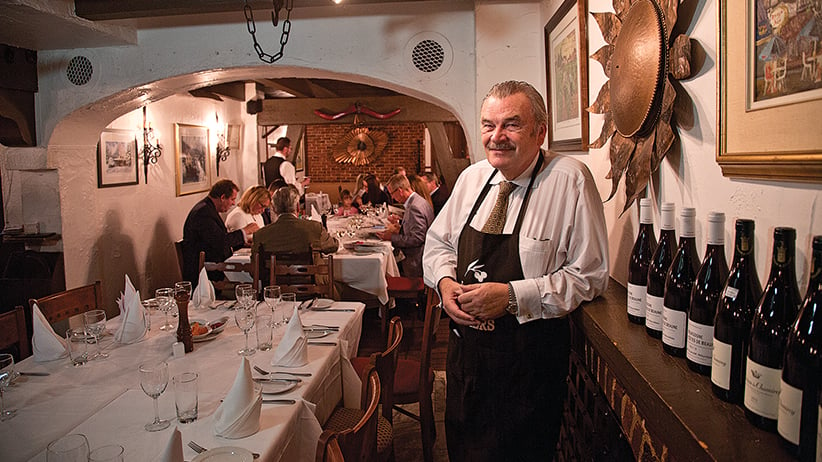 Owner of Le Mas des Oliviers, Jacques Muller, stands for a portrait in his restaurant. The restaurant opened in 1966 and will close at the beginning of October. (Photograph by Roger Lemoyne)

Ever since Montreal restaurateur Jacques Muller announced that his beloved Le Mas des Oliviers would close its doors for good at the beginning of October, reservations there have been all but impossible to come by. As for walk-ins, forget it. “I went by the other day and I couldn’t even get a seat at the bar,” exclaimed David McMillan, chef and co-owner of the enormously popular Joe Beef.

Le Mas, as its regulars call it, opened in 1966—just in time for Expo. Muller purchased it a decade later, right after the Summer Olympics. He has been there pretty much every day since—supervising the kitchen, spreading charm, distributing countless rounds on the house, and ably minding all those details that made his dining room many a customer’s second home.

The restaurant’s 50-year run would be impressive anywhere. In Montreal, it should have been impossible. The year Muller bought Le Mas, the Parti Québécois was elected for the first time. Two years later nearby SunLife HQ decamped to Toronto, and two years after that came the first referendum. On it went, through ups and mostly downs—until a lingering dispute with his landlord finally defeated him.

“I could have gone to court,” Muller confided. “Maybe I could have stayed another year, maybe two—but I’m 72, my health is not perfect—so I gave my two months’ notice and that’s that.”

But it’s not quite so cut and dried. Over its long journey Le Mas became an institution, several times over. The aspect of the iconic status of Le Mas that is most easily conveyed was its sybaritic supremacy in the era of the martini lunch. If the era itself seemed to linger an extra decade in the city of Montreal, at Le Mas it endured longer still—several cognacs into overtime, a little wobbly, down too many soldiers, but forever proud.

Then there was its long period at the center of Quebec Tory power. In the ’90s, Le Mas was the place you would bump into former senator Michel Cogger celebrating a court victory in his influence-peddling trials; or later, Mulroney himself, celebrating his own in the Airbus affair.

And there was my father, Mordecai, who maintained a part-time office there. The location was ideal—just a four-block walk away from our downtown apartment.He enjoyed Jacques’s gracious hospitality, and relished his unchanging repertoire of hearty French bourgeois classics. But Le Mas also had the perfect table: No. 28. In restaurants my father always liked to sit beside a wall, for defence from pushy strangers on at least one flank; No. 28, tucked at the back of the dining room, had its own alcove. Which is to say not one but three barriers of defence—all the privacy of a private room, without the affectation.

There, with no one snooping or listening, he could conduct interviews, enjoy a long lunch of reminiscences with Pierre Trudeau, talk about the state of business with Stephen Jarislowsky—or that time with Richard Dreyfuss, who came to town to try and talk him into writing a sequel to Duddy Kravitz. We had more family lunches there than I can count.

I was there with my parents on Black Monday, and remember him showily ordering champagne, just to be perverse. I was there for lunch with them in ’93, the day after the Habs won their last Stanley Cup, when another regular named Serge Savard—then the GM—came in with his boss, Ronald Corey, and the room gave them a spontaneous standing ovation. And I was there for lunch the day after the last referendum, when my father invited his friend (Equality Party-turned-Péquiste turncoat) Richard Holden to join us, and, over entrecôte bordelaise and frites, chastised him repeatedly, and gleefully, “I hope you enjoyed it. Because you’ll never come that close again.”

Montreal will never have a place quite like Le Mas again, either. Even at lunch, the waiter would never bring a menu until you had finished at least your first cocktail. The message implied was that it was gauche to be in a hurry and order your food before proper conversation had started. Such thinking is passé.

Unthinkable as it so recently was, so too is classic French food in Montreal. In downtown alone, Les Chenêts, Le Caveau, Les Halles are all gone, and just recently, le thon tataki crept onto the menu at l’Express.

But most of all, young men no longer aspire to one day take over their father’s tables at establishment restaurants—that tradition is done. But I’ll be raising one last cognac at table 28 to properly say goodbye—I mean au revoir, Jacques et le Mas, et surtout—merci.