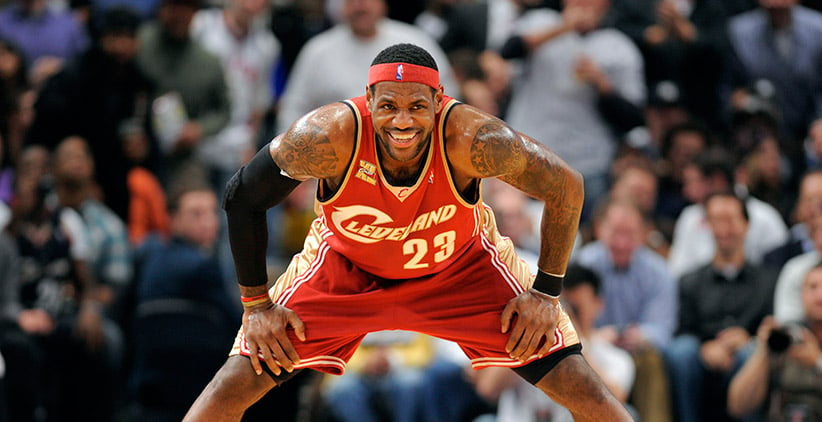 They called the lead-up to LeBron James’s announcement today “the Decision 2.0,” but the tenor of the proceedings had been completely different. In the ancient yesteryear of 2010, James, a supernaturally gifted 24-year-old basketball player, had the world waiting breathlessly for where he would sign. Would it be with the upstart Miami Heat, to form a formidable trio with star Dwyane Wade and ex-Raptor Chris Bosh? Would it be in those twin gleaming markets, New York or Los Angeles? Or would it be back with his hometown Cleveland Cavaliers, who had drafted him seven years prior?

After weeks of hemming and hawing, ESPN donated a half-hour of broadcast time for an indulgent debacle called “the Decision” where he’d tell us all where he chose to sign. After the highlights of his career played, he told the world: “This is very tough. This fall I’m going to take my talents to South Beach.”

Cleveland crumbled. Fans took to the streets to burn James’s jersey. The Cavaliers’ owner wrote a classless letter calling James’s departure as a “cowardly betrayal”—in comic sans font, no less. That he told an international audience about his breakup only made things worse. Sure, the Decision was for charity, but that was lost in the grotesque spectacle of it all. The entire northwest Ohio region took James’s decision to be the latest addition to a curse that has plagued the championship-free area since time immemorial.

Then he went to Miami, and all he did was win. In four years on South Beach, he appeared in the NBA finals every year, emerging with two championships. Sure, he was perceived as a villain—the fact that his team stacked the deck for him didn’t make him any easier to root for, either. They became an all-star squad in a broken game, and those kinds of winners can be hard to cheer for. But in Miami, he came, he saw, and it’s hard to say he didn’t conquer.

So when James opted out of his contract at the end of the year, it was unclear where he would sign, and the Decision machine hummed to life again, asking the same questions. Would it be with Miami again, to reform that formidable trio with Wade and Bosh? Would it be in those still-gleaming markets, New York or Los Angeles? Or could it be back with his hometown Cleveland Cavaliers, who had been so deeply jilted four years prior? Let the circus start up again, we all groaned.

Instead, we frothed ourselves into a frenzy. Journalists tracked every single movement and analyzed every single sentence from any and all camps; sportswriters became moving experts when a van holding James’s sports cars pulled up in his drive. Meanwhile, James was silent. In the end, it was a rigorous process that brought James back to Ohio, announced with a simple written statement in Sports Illustrated: “I’m coming home.” In that fell swoop–no muss, no fuss–he’s shown he’s not just capable of soaring with improbable grace to the hoop; he’s proven he can knit together bridges that have been burned to ash. He’s single-handedly changed his legacy because of the overwhelming power of redemption narrative.

The Decision 2.0? No, this was something much more peaceable. This was the Revision 1.0, and the reason it feels right is because it is.

The legacy of an athlete can only be meaningfully assessed in retrospect, when their incredible exploits are mere statistics. With this quiet, steady move, we’ll look back at James’s career and see the Miami era and the “Decision” hoopla as a mere hiccup in a legendary life. Chances are, too, this is the last contract he ever signs. If so, those four years of villainy will be footnotes. In fact, in the letter, he even said it himself: “Miami was like college to other kids” (he did not, after all, attend college). James has graduated now, fully formed and ready to help out at home.

Sure, there are still questions to ask. Will Anthony Bennett and Andrew Wiggins—the Canadians who comprised the last two first-overall picks in the NBA draft—remain in Cleveland, or will they be dealt for win-now help? Ignore for a second that this was also the right basketball move for James, that it has the right combination of current stars to make Cleveland a contender now, and future prospects he can groom to help him when he begins to leave his prime. Instead, give yourself over to the narrative. It turns out that we were underestimating him once again, even though he has consistently delivered on the court and beyond. We didn’t expect his return could be so drama-free, and here we are, nodding our heads, realizing how totally logical this whole thing went.

FILED UNDER: LeBron James The Decision