He loved the outdoors, playing country music with his twin brother Jimmy, and his Pomeranians 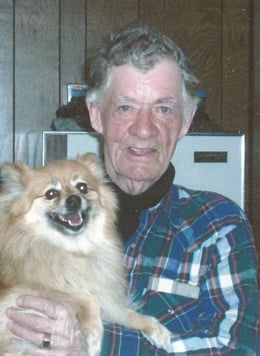 Leslie Wilfred Badder was born in Winnipeg on Feb. 24, 1934, shortly after his twin brother Jimmy. He was the youngest of nine children for Charles Frank Badder and his wife, Phoebe, who had a small farm near the rural town of Woodridge, located about 125 km southwest of the city. When the boys were toddlers, stomach cancer claimed Charles’s life, and Phoebe moved the family into town, where she struggled to make ends meet on just $40 a month. “It didn’t stretch far,” says Leslie’s sister Betty, recalling how they would swap food stamps with neighbours so that “we never did go hungry.” But Phoebe ran a tight ship, insisting the children were home for supper by 5 p.m., and chastising them whenever they were careless about their safety. When she learned an adolescent Leslie had tried smoking, she “gave him hell,” says Betty.

Though all the Badder children got along, Leslie and Jimmy were inseparable. Leslie “loved his outdoors,” says Betty, and would spend hours with Jimmy in the bush, trapping small animals and fishing. The twins were staying with their older sister Thelma in 1952 when a local man broke into their mother’s home one day before dawn. He shot and killed Phoebe before taking his own life. “They took it hard,” says Betty of the boys. But somehow, Leslie retained a sense of humour and goodwill toward others. “If you ever needed a hand, he was right there,” says friend Lloyd Pederson. The twins learned to play guitar and harmonica by ear, and the traditional country songs became a fixture at family gatherings.

By the time their mother died, Leslie and Jimmy were working for Thelma’s husband in the bush. Once, when they came upon a den of wolves, Leslie became so excited about cashing in the pelts that his rifle went off accidentally, nicking his nose and grazing his forehead. “He always said, ‘My big nose saved my life,’ ” recalls Jimmy’s son Lorne. Soon after, the pair found work as truck drivers in Winnipeg. It was there that Leslie met Marge Sears, who lived across the alley from where he was staying. They married in 1956.

Trucking suited Leslie well. Over the years he amassed a stable of loyal friends, and if work permitted, would join his brother on the road. Seventy-hour workweeks were bookended with fishing, hunting and whisky-fuelled singalongs, to which Lloyd regularly lent his fiddle. After his marriage to Marge ended in the early 1960s, Leslie went on a blind date in Woodridge with Melvina Michel. The meeting sparked a decade-long courtship. She also had an ear for music, and would write down lyrics and accompany him on the spoons. The joke, says Lorne, was that “she wouldn’t marry him drunk, and he wouldn’t marry her sober.” When Mel finally agreed, they exchanged vows right away, says Betty, “so she wouldn’t say no.”

By the 1980s both brothers were back in their hometown, and their music filled local dance halls and bars. Like Leslie, Mel loved dogs, and the Pomeranians they bred for a time became like children to them. “She called him ‘Pa,’ and he called her ‘Ma,’ ” says Lorne. Leslie instilled his passion for the outdoors in his nephew’s sons with countless fishing and hunting trips, and four-wheelrides in the bush. “He was like a second grandfather,” says Randy, who inherited his great-uncle’s ability to wait for a tug on the end of his fishing line. Fishing became a particularly welcome distraction after 1993, when Jimmy died of lung cancer. Leslie missed his brother dearly, and “talked about him a lot,” says friend Colleen Ross.

Leslie’s own battle with prostate cancer started in 2003, but throughout his treatment, says Colleen, “he never dwelled on it.” Several years later, Mel got sick too. Hers was liver cancer, and by the time doctors found it, it was too late. Leslie visited her in hospital daily. Before she died in 2007, they had adopted two Pomeranians. And after Mel passed, Leslie was rarely without Snoop, who was the younger of the pair and “attached to him right away,” says Lorne of the small, golden-haired dog. “She gave him extra life.”

On Wednesday, Oct. 8, Leslie was in Winnipeg for his final six-month checkup. To his delight, the cancer was gone; his doctor gave him a clean bill of health and another five years. The next evening, he went hunting with a good friend. They were aiming for beavers, which had been gnawing away at a bridge they used. In the darkness, Leslie’s friend mistook him for an animal, and shot him. He succumbed to his injuries en route to hospital. On Saturday, Leslie was buried in Woodridge, next to Jimmy. The headstone that presides over the double plot is adorned with a fishing boat and two guitars. It reads, “Twins forever.” Leslie Badder was 74.