Letters: 'Heroism is not a misplaced word.'

Maclean's letters to the editor 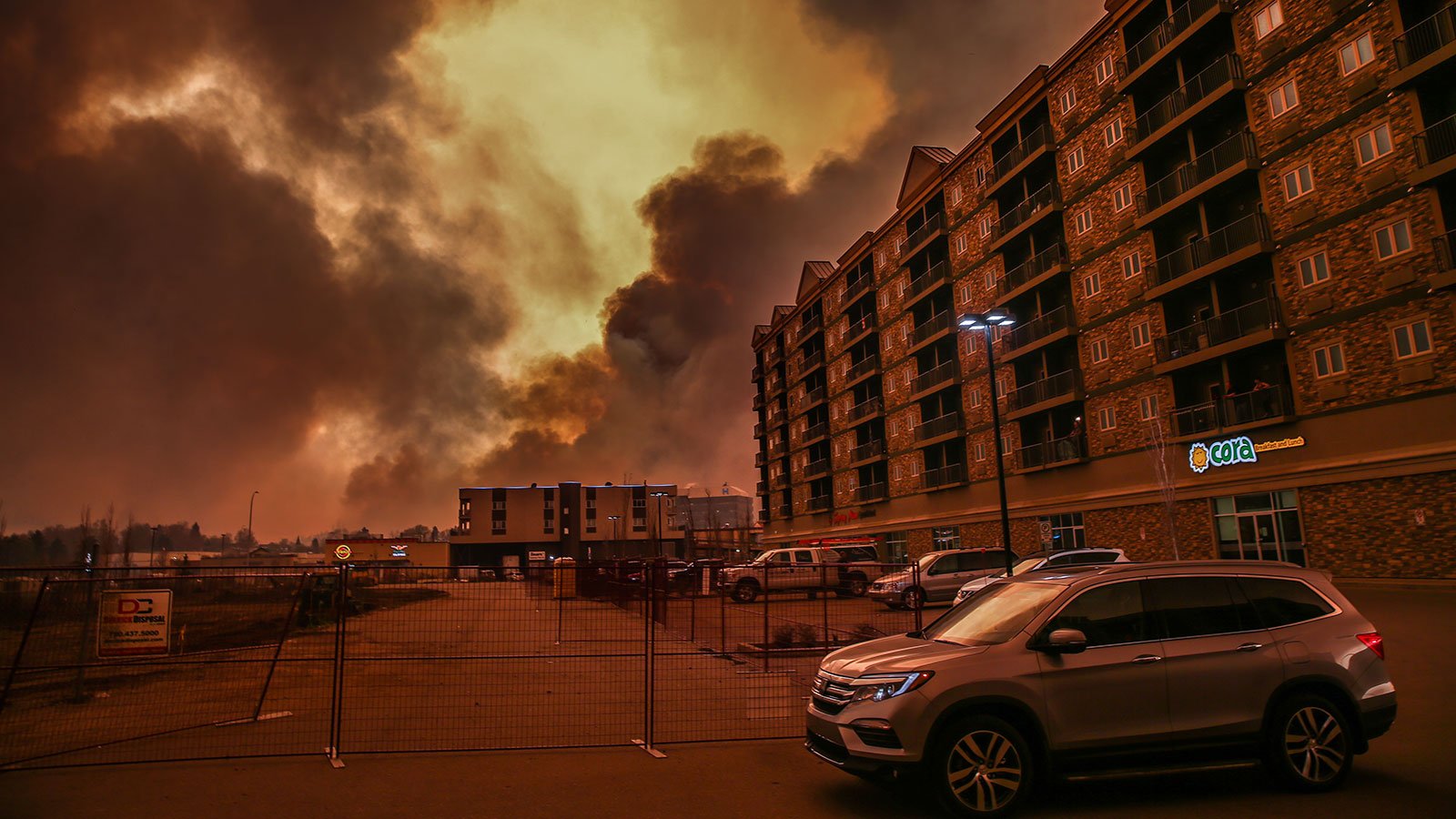 Congratulations on your May 30 issue, “The great Fort McMurray wildfire.” The chronology read like a well-researched and suspense-filled novel. However, it is real. Your contributors provided diverse perspectives on the many current and future issues impacting us all because of this event. Peoples’ stories evoked strong emotions, from tears to pride to be part of a great, caring nation.

I think of first responders and all of the others who have helped out in the battle against the ravaging forest fires, and perhaps all other disasters as well, as more than merely heroes (“The great escape,” May 30). They are truly brave and courageous warriors. Counted among the warriors are the fire fighters and police, the water-bomber crews, the ones who took time to help stranded motorists with gas, the ones who provided sandwiches along the road, those who welcomed the displaced with open arms, and many others who took time and effort to assist those in distress even in the smallest ways. And of course, every band of warriors has a general at their head. Fire chief Darby Allen has been a superb general, encouraging the troops, and well assisted by those in direct support, like Premier Rachel Notley. The rest of us have merely watched and marvelled from a distance, prayed a lot, and hopefully made a financial contribution.

My granddaughter in Edmonton had her Xbox and 16 games with movies for sale on Kijiji. They received an email from a man saying he’d like to buy them all. They called, and found it was a father with his wife and 10-year-old in a hotel in Edmonton; they had lost everything in Fort McMurray. He wanted it for his son who was so upset and had nothing. My granddaughter and her father took it to them at the hotel and gave it as a gift, even though the man wanted to pay for it. The young boy said, “Why did you just give this to me? I don’t even know you. Thanks.” My granddaughter couldn’t speak for the tears and left. She posted on Facebook that “it was the best day of my life.”

The May 30 edition was a masterful recounting of the fearfulness of the fire in Fort MacMurray. The photos are a testament to the courage and tough will of the evacuees and the management teams. Heroism is not a misplaced word in this instance. As a small aside I would like to add the fire of Ottawa on April 26, 1900, to the list mentioned in the piece “Towering infernos.” It started as a small chimney fire across the river in Hull, Que. Driven by strong winds the flames and burning embers jumped the river, leapt from one lumber pile to another and completely wiped out an area roughly one-fifth of the city of Ottawa and a large portion of Hull. Seven people were killed, 15,000 people were left homeless. Damage amounted to about $6.2 million in Ottawa and another $3.3 million in Hull (neither amount adjusted for inflation). Worldwide response generated about $1 million in aid. That fire was instrumental in spurring city council to pass bylaws that prohibited the building of wooden houses.

Selling out the country

Switzerland, U.K., Bermuda, Australia and even China protect their citizens by restricting and/or penalizing foreign buyers of real estate. Here in Canada, it may be like closing the barn door after the horse got out, but surely we can do something even more effective to protect Canadians from foreign flip artists and money-launderers (“China is buying Canada,” Economy, May 16). Even restricting foreign buyers to family units of more than 4,000 sq. feet and five years ownership would be a good start at saving Canadian futures. While we are at it, we might even address the “passport only” citizens from devaluing our citizenship and the international credibility that it gives them by requiring five years residence after they get a passport.

The real kicker in this article is that a dual passport holder can install family members, as students, wives, cousins, in multi-million-dollar homes and pay no taxes, even if they are out of country 183 days a year, have a home and business elsewhere (nudge nudge wink wink). These non-revenue folks are using our tax-funded schools, hospitals, libraries, roads, etc. at my cost and tax dollars. How stupid are we tax-paying middle-class citizens with only one passport? And the wealthy can hire an accounting firm to legally stash big dollars in Panama, Cayman, Jersey, etc., so they can avoid taxes on interest, dividends and capital gains. They too access schools, hospitals, etc., and avoid supporting them. There is a big sucking sound every year when I pay my huge tax bill. I always wonder what group is illegally soaking the dollars up. You have certainly helped to clarify that sound.

Michael Friscolanti’s “A temporary fix” (Society, May 9) brings attention to the mistreatment of migrant workers in Canada on behalf of the Temporary Foreign Worker Program. Lawyer Jody Brown discusses how it is crucial to abstain from assuming the entire migrant-worker industry in Canada treats their workers poorly. My family owns and operates a tobacco, ginseng, poultry and cash-crop farm, and we deal with the Foreign Agricultural Resource Management Services (FARMS), an organization that ensures migrant workers working in agriculture in Canada are treated properly. FARMS is an example of a Canadian agency that displays diligence and commitment toward securing the proper treatment of migrant workers in this country.

Prince was the bestest

Your obituary for Prince (“The artist we formerly knew as Prince,” Music) is a gush-fest that hails this unique talent as “the most,” “the best,” “like only the Beatles before him,” dominant over Madonna and Bruce Springsteen. Who cares? More interesting would be some understanding of who this man was. We know John Lennon and Paul McCartney were geniuses with Irish Catholic roots and mother issues. What’s Prince’s story? Did he really go door to door as a Jehovah’s Witness? What did he owe to his parents, especially to his mother, about whom little is said? What collision of stars built his super ego and lascivious id? Instead we get an overexcited piece about how great and outrageous and “better” he was. It irks. Here’s to Prince—and to knowing more about him.

I have just finished reading about smartphone apps that are supposed to document sexual consent in the bedroom (“Consent confirmed,” Society, May 16). I feel as though I have just read a third-rate science-fiction account of modern life that, if it ever becomes real, should scare the living daylights out of everyone. Whatever has happened to real human emotions and relationships where people talk to each other—in person?

“Divorce in B Major” (Society, May 9), about the marriage of Jeff Melanson and Eleanor McCain, shows us that carnival men are still around and that poor little rich girls and publicly funded art institutions should be put on alert.

What’s so cool about Uber?

Your May 9 Editorial cites the Competition Bureau and its lauding of “innovation” when it comes to Uber. Let’s be clear: Uber has nothing to do with innovation. Transporting passengers for a fee has long been the realm of the taxicab industry. The Uber app is only innovative in that it may be a better taxicab dispatching system. But instead of Uber offering this technical advance to taxicab companies, it instead wants to facilitate illegal activity. Maclean’s is suggesting that the point of all of those regulations and laws that were enacted over a many decade time frame was just so that municipalities could assert their control, to enrich themselves, and to enrich those who have been fortunate enough to acquire a taxicab licence. That is malarkey. All of those rules and regulations and laws were brought in so many years ago to regulate a chaotic industry that demanded some structure and that could be sustainable. Blow it all up and start over again? Maclean’s is championing anarchy when it comes to Uber, not innovation. How sad.

Taxi licences should be given to drivers, not vehicles. A taxi licence should be like a heavy vehicle licence, earned by the driver meeting strict qualifications, and applying to an individual driver, not coming along with a vehicle owned by a company. That taxi operator’s licence should be specific to a city or area. The qualifications should include fluency in the official language most used in that city and driving proficiency in the local setting. Most of all, drivers should know the city layout and be familiar with the streets they may be called on to drive in. Cab-driving should not be available to anyone whose car has a GPS system, or because they can muster an outlandish premium to a taxi owner or company who should never have had the right to control or assign taxi licences in the first place.

Bernie Sanders is not delusional

The sub-heading of the Bernie Sanders piece—“On the road with the most dogged, unrelenting and possibly delusional campaign in America”—is a bit puzzling since nowhere in the article does Allen Abel even hint at or imply anything delusional in the Sanders” campaign (“Still feeling the Bern,” International, May 16). It’s also a little bit unfair. Sanders’s authenticity and refusal to knuckle under to the demands of the Democratic National Committee suggests more of a classic hero than someone with a few screws loose. Which other candidate has refused to back down and chosen instead to combat adversity at every turn? Who else has stood up to the establishment and inspired millions of admirers by simply defying the odds to challenge a corrupt and unfair system? If Sanders’s courage and tenacity are now to be redefined as delusional, then I for one say, bring it on.

Barack Obama did not say “please stay put” when extolling U.K. politicians to remain within the EU (“A little help from a friend,” National, May 9). Instead he threatened them with demotion to the bottom of the list of the U.S. trading partners if they exited the EU—a point surprisingly omitted in your article. The U.S. (and, for that matter, Canada) enjoys the very status that Brexit supporters desire, that is, one based largely on trade. If Obama is so enamoured with the EU, he should strive to establish an “AU” within North, South and Central America. He might then change his opinion when U.S. political, financial, legal and other domains are controlled by, say, the leaders of Mexico, Brazil and Argentina, supported by countries of lesser importance but with equal voting power.