Letters: 'I held my nose and opted for the least objectionable choice' 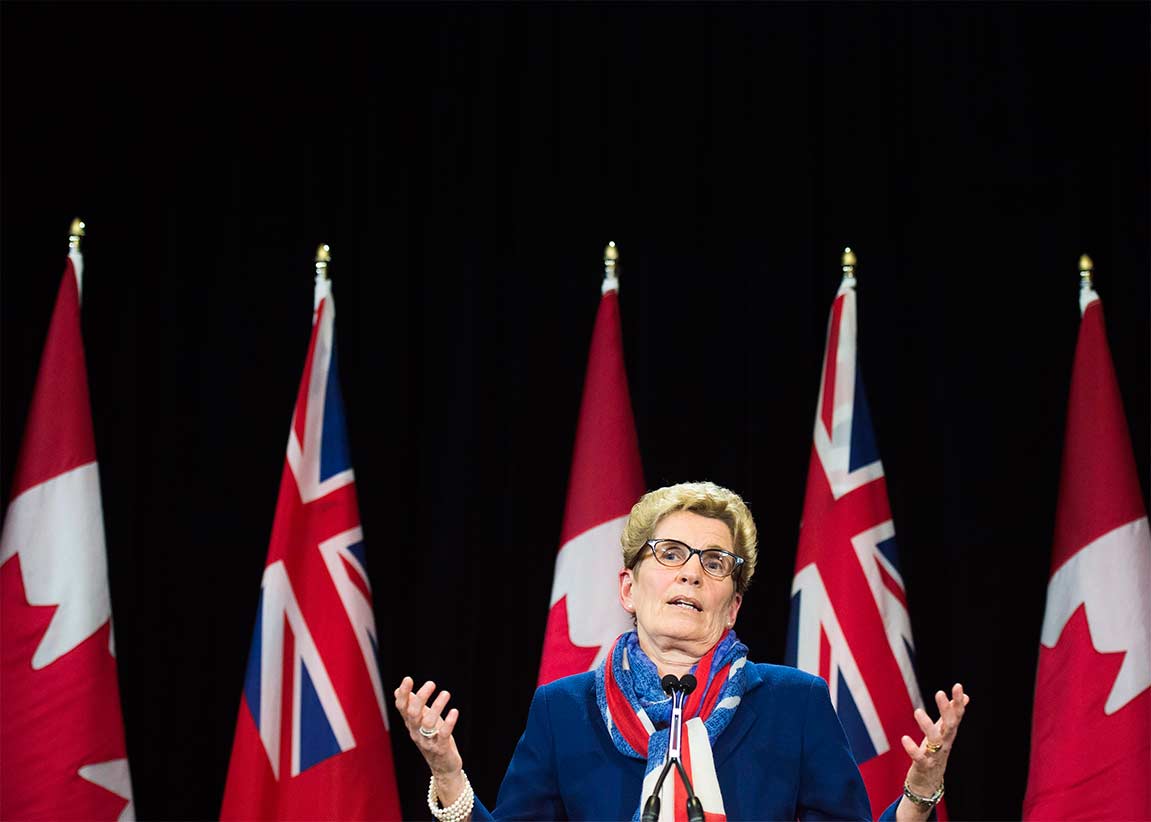 Your comprehensive article about Ontario’s economy (“As Wynne commands,” Economy, July 4) serves to prove my worst fears. Our economic woes are mostly caused by highly uncompetitive electrical costs. Having owned a business, I can attest to the fact that I would not have been able to employ many workers under the current regime. The fact that we are paying $11 billion per year to service the debt is mind-boggling. What will this figure be when interest rates increase? However, you do not explain the incredible war chest that the provincial Liberals have accumulated and the strategies in place to virtually buy another election with the taxpayers’ money.

Thank you for exposing Ontario Premier Kathleen Wynne and her government as a regime of incompetence, of disdain for the taxpayer, and of myopic ideological decisions based on the egotistic desire to leave a legacy built on fallacy.

Charlie Gillis claims that Ontario’s economy is in long-term decline. If that were true, his conclusion that the provincial government is to blame might merit debate. But Ontario’s economy is growing. The private sector is creating jobs. And government policies are helping, not hindering this growth. The recovery has been fragile, but both per capita GDP and employment are now higher than they were before the recession. For the past two years, real GDP growth has been above 2.5 per cent. For the past three years, Ontario has attracted the most foreign capital investment in all of Canada. For two of those years, we led North America. Over the last 15 years, mineral production and exploration expenditures have nearly doubled. The province’s credit rating was recently upgraded, not downgraded. Ontario is now procuring renewable energy projects at competitive market rates, not above them; red tape is being cut, not created; the province has among the lowest business costs in the G7. Government is not the whole solution or the whole problem. Under Premier Wynne, Ontario is striking the right balance.

In early 2014, this now 64-year-old lifelong Liberal voter found himself among the majority of Ontario voters who believed that Liberal domination at Queen’s Park had gone well past its “best before date” and I was more than ready and willing to jump ship and to vote for the New Democratic Party for the very first time in four decades of voting. But even though NDP Leader Andrea Horwath pulled the plug on that government with a vote of no confidence, she inexplicably took almost a fortnight to finally unveil her party’s platform. And Tim Hudak’s ill-advised slogan, “Vote for me and I’ll see to it that you lose your job,” was an absolute no-brainer for me. So for whom did I vote? I held my nose and opted for the least objectionable choice, Kathleen Wynne. I can only hope that two years hence, these latter two parties will be better prepared to not only mount serious campaigns against the Liberals, but to govern the province fairly, sensibly, and with good sense in victory, afterward.

Regardless of the concerns that assisted death could help to normalize and promote suicide, the article “What we’re not saying” (Society, July 4) misses the point: that while we lament suicide among the young and want to prevent such tragedies, the adults of the world have in actuality created a worldwide omnicidal culture. We live in an age in which we are totally hellbent on killing our food supply, our air, our animal life, our oceans, our planet, our homes—all for monetary power. So we shouldn’t really be overly surprised by escalating suicide rates among the young, should we?

Congratulations to Scott Gilmore on an excellent column (“When a nation collapses and nobody cares,” June 27) that told us more in one page than we have heard about Venezuela or, for that matter, probably any Latin American country, in a very long time in the Canadian media. Our media take next to no interest in the rest of the Americas below the Rio Grande except when a Canadian tourist is killed. There is a lot Canadians need to know about the rest of our continent, in order to distinguish one place from another, find useful parallels, travel with our eyes opened, and perhaps lend a positive political hand at times.

Any time there is a mass shooting in the U.S. you scream for gun control, never mind the facts (The Editorial, June 27; “A too-familiar tragedy with a difference,” Scott Gilmore, June 27). An AR-15 was not used in the Orlando shootings, it was a SIG MCX. Most mass killings in the U.S. are among rival gangs and drug dealers. None of the proposals brought up by the Democrats would have done anything to stop what happened in Orlando. Some states, California for one, has stricter gun controls than Canada and it still didn’t stop the shootings in San Bernardino. Both of these shootings were caused by Islamist terrorists. You mention gun control working in the U.K., but still a politician was shot there on June 16. Instead of crying for more useless gun control, accept the fact that it is impossible to get rid of guns in the U.S., or anywhere else for that matter. A much more realistic approach would be to allow qualified people to be armed and able to defend themselves.

Ah, Canadian optimism. Your June 27 Editorial claims: “Weaning the U.S. off its guns is certainly a huge and daunting task. But nothing should be considered impossible for America.” You show a lot more belief in the American people than I ever could. Americans live in a state of fear. Even the police are scared, which is why so many unarmed people are getting shot and killed. Americans have to have their guns to protect themselves from whoever is out to get them. I don’t really think that most Americans do care about each other. This is why there is no national outrage over the massacres of innocents after 136 mass shootings this year so far, not to mention the thousands of victims of homicide by firearm, or the even greater number who used firearms to commit suicide. And what has been done about all this? Nothing.

Thank you for giving Gordie Howe the ink he richly deserved (“Mr. Hockey,” Gordie Howe, June 27). My blue-collar dad thought Gordie was the ultimate hockey player: farm background, work ethic, fast, tough as nails. Yet humble, respectful, team-driven and appreciating everyone who appreciated him. Thanks, Gordie, for giving Dad some of his best hockey memories. He always talked about the scores, hits and elbows. He watched Wayne Gretzky because Wayne respected Gordie Howe.

My father, uncles and their friends attended school and played hockey with Gordie Howe during those early days in Saskatoon (“His truest friends,” Gordie Howe, June 27). During a family visit to Calgary in a summer of the early 1960s, my father read in the local paper that Gordie was signing autographs at the downtown Eaton’s store. My younger brother and I were loaded into the car to meet the great Gordie Howe. Upon our arrival, Gordie yelled out to my father, “Hey, Rich, what are you doing here?” Gordie Howe remembered everyone. Not only was he Mr. Hockey to the hometown, he was also Mr. Saskatoon. RIP Gordie.

In the span of 43 years I met Gordie Howe on four separate occasions with my father, brother, son and granddaughter. Each time was special. It is like Mark Howe said, there was a mystique about him and for the few seconds that you were in his company, time stopped and all sounds ceased. He didn’t just have an effect on Detroit but the whole state of Michigan. One item that was missed was a private member’s bill tabled in the Michigan legislature, after his first 1970 retirement, to allow him to run for governor while he applied for his U.S. citizenship.

In your anxiety to discount the Trump phenomenon (“Stumping Trump,” Good News, July 4) you have dismissed Trump but missed his message: A plague on all your houses! The U.S. now has a Hobson’s choice. One candidate, by reliable accounts, is as crooked as a dog’s hind leg and represents the Establishment of securely self-serving bureaucrats, politicians, generals, outrageously overpaid executives, and similar worthies. The other candidate knows only how to use a shotgun and has an uncertain aim: yet some of the pellets from his scattergun hit right home where they should. The millions of Americans who have heard Trump’s message and sorted it out aren’t stupid. Canadians should pay a little attention! Canada desperately needs a better-bred Trump. Who is she? Where is he? Lord help us, because He is apparently the only One who can.

If Donald Trump is so bad, then why did he beat 16 other candidates? Yes, he is extreme; extremely smart, extremely intolerant of the liberal ideas that have destroyed the U.S. and Canada and extremely politically incorrect. He does not answer to lobbyists or anyone else for that matter. He will be the best thing that ever happened to the U.S. I just feel sorry for us: can you imagine Trump and Justin the kid at the bargaining table? Trump will eat him for lunch. I will move to the U.S. if Trump gets elected!

I read Scott Gilmore’s column “The men who ruin politics for women” (International, June 20) with interest, especially the line that “women are paying attention.” I do pay attention. Though Maclean’s often pays tribute to gender equality, I pay attention to the number of featured female columnists versus male columnists and to the number of female obituaries versus male obituaries at The End. I am indeed paying attention and I am often disappointed.

We need many more “on the ground” diplomats such as Bruce Mabley (“Canada’s rogue diplomat,” International, July 4), who says, “There is no replacement for good old-fashioned human intelligence.” CSIS is considered armchair intelligence, relying on electronic communication to gather information. South of the border, was it mediocrity and this type of armchair surveillance that allowed the FBI to lose track of Omar Mateen when he opened fire in an Orlando gay bar killing scores of people and wounding many more? He had been followed by the FBI since 2013. Routinely, we are experiencing these kinds of attacks around the world. Soon we will be afraid to move. Where’s Bruce?