Letters: Inside the mind of a Trump voter is a perfect oxymoron

Letters to the editor from Maclean's readers 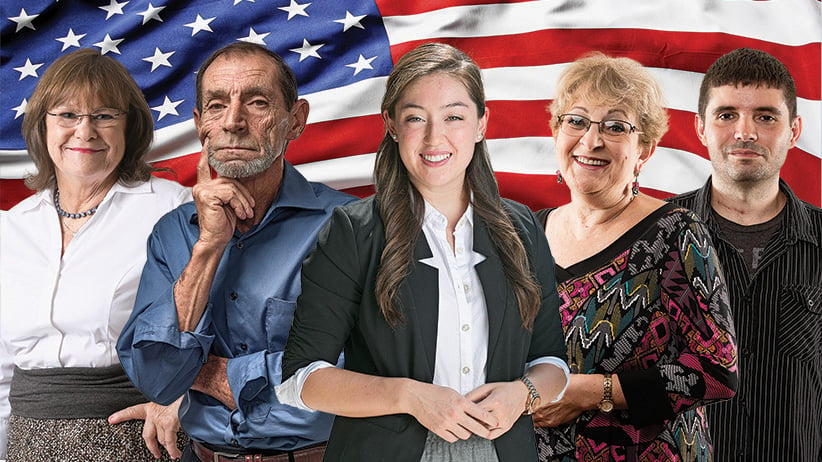 I was so pleased to read “Why I’m voting Trump” (International, Sept. 26). I too support Donald Trump, and if we could, both my husband and I would vote for him. The U.S. is so important to Canada and I just pray that Trump makes it in. Our country is sadly headed in a bad direction too and we need someone like Trump to shake things up.

Your cover headline of the Sept. 26 issue—“Inside the mind of a Donald Trump voter”—is a perfect example of an oxymoron.

I assume you will be sending a copy of the Sept. 26 issue to all 11 people who are voting for Trump, in the hope that they will also read Scott Gilmore’s lucid, fact-based, enlightening column (“Insanity in America,” International) that immediately follows it.

How were you able to determine that these were “perfectly rational, everyday Americans”? I would hate to meet the irrational ones.

I need to protest your latest sleazy diatribes against Donald Trump, a man who wants to rebuild America, a man who could sit down with Vladimir Putin and do business. Can you actually imagine Hillary doing that? Can you imagine any of the world leaders actually seriously listening to her? Of course, I understand that you people are utterly dirty and filthy and rotten to the proverbial core and are quite simply demented to the point where you’re absolutely as untrustworthy as hell. And you actually have the temerity, the audacity, to call us taxpaying Canadians racist, as well as so many of the other epithets that you self-righteously throw our way on a continual basis. Just who, in your insanely judgmental fantasy world, do you think you are anyway? But continue to shove at us just how lovable and misunderstood Hillary is, and it’s all our fault that she’s so hated and distrusted just because she’s (wait for it!) a woman.

Allen Abel’s article proves that “perfectly rational everyday Americans” can be conned, especially when they only hear what they want to hear. The people in this article either do not care or are unaware about a) Trump’s ignorance of foreign affairs and the global economy, b) Trump’s open admiration of dictators, c) Trump’s record of discrimination of minorities, d) Trump’s many bankruptcies and continuous lawsuits, and e) Trump’s lifelong devotion to self-promotion. Voters need to do a little research. That someone believes Trump has been “anointed” by God is beyond alarming—even Trump himself has not gone that far, but no doubt would be pleased with the ultimate con.

I am the same age as Donald Trump and have never been so happy that we are all mortal and I will not have to put up with him for too long.

“Pulling America apart” (International, Sept. 19) was a double-barrelled hit piece in the anti-Trump media volley. In one article, David Frum, an anti-Trump Republican elitist; in the other, Peter Beinhart, a pro-Clinton Democrat. Was Rudolph Guiliani unavailable? Mike Huckabee? Kellyanne Conway? Katrina Pierson? The reason Donald Trump received the Republican nomination was because the Republican base was sick and tired of sending Republican establishment types to Washington and watching the country go down the tubes. Trump is blustery, bombastic and unforgiving. A President Trump will not look kindly on the northern neighbour whose media and politicians are trashing him night and day—and we need their trade far more than they need ours.

Justice Robin Camp and his supporters seem to believe that his unsatisfactory performance on the bench can be attributable to a training deficiency (“Above the law,” National, Sept. 26). Ignorance may be dispelled by training, but stupidity lasts forever. One would have to have lived under a rock for the past 20 years not to have picked up on what now passes for common sense regarding mistreatment of rape victims in Canada. Show him the door. We have had enough of his kind on the bench.

Gord Downie’s new solo album, Secret Path, is dedicated to Chanie Wenjack, the Indigenous boy who died while escaping a residential school in 1966 (“The lonely death of Charlie Wenjack,” National, Sept. 26). In a letter to fans, Downie wrote that Wenjack’s story “is Canada’s story. This is about Canada. We are not the country we thought we were.” Maybe Downie did not know the story, but Willie Dunn had a song called “Charlie Wenjack” on his 1978 album. Dunn was a Mi’kimaq singer, songwriter and producer of albums and films about Aboriginal issues. Downie should have said, “Canada is not the country I thought it was,” instead of using the term “we.” Many people know our history and the issues and events of the past.

The best use of our military forces can be found right here in Canada. Surely our Native peoples, living often in Third World conditions, deserve our help to have potable water, adequate housing, and sanitary living conditions (“Once we break it, we’ve bought it,” Evan Solomon, Sept. 26). Based on my experience with marine engineering battalions, our military has all the necessary skills to provide these basic services to our own people. They are trained to work under difficult field conditions. All they need is the funds—already being spent on their wages and living expenses—and orders to do the job. Monies already being provided to the bands will be redirected to improving the quality of life on their reservations, and not to enrich the leadership.

Thank you, Scott Gilmore, for pointing out our national disgrace in how we treat our North, for which we claim to stand on guard (“The great Canadian lie,” National, Sept. 19). Could we, and just for a minute, stop worrying about the tiniest African village, and instead pay attention to our own barely surviving northern settlements? Are we really grateful enough to its population for not loading up skidoos and teaming up sled dogs in abandoning their government-neglected existence and heading south? There has been decades of disinterest for the immense Canadian Arctic and it will equally take decades to tackle existing and pressing problems. The adage of “use it or lose it” applies here; with the most northern shipping routes opening up, it will be others using it and we will no longer call it our true North.

I hope the Russians didn’t read this column.

Brian Bethune’s article on Margaret Atwood’s new graphic novel, Angel Catbird, fails to describe what is innovative about Keep Cats Safe & Save Bird Lives, the Canadian campaign connected to her new work (“Faster, pussycat! Kill! Kill!” Books, Sept. 12). Bethune’s article pits cats and birds against each other, failing to address the perils they both face. It is cat-owner behaviour that we seek to change. By working to reduce the number of owned cats roaming unsupervised, society can limit the risks to both cats and birds. It’s counterproductive to malign cats in the hope of protecting birds. To boil such a complex situation down to the suggestion of euthanizing some cats only encourages animal cruelty. Regarding cat predation of birds in Canada, the number that Bethune quotes is, in fact, a preliminary estimate and not confirmed fact. The real number could be higher or lower; we simply do not know. This program aims to improve the quality of data available so we can more accurately frame, and respond to, the situation we’re facing.

All the wanted children

Melinda Gates (Interview, Sept. 19) says there are 225 million women who want contraceptives and are not getting them, and that results in 52 million unintended and unwanted pregnancies a year. We know what unwanted children have to go through and how difficult their lives can be: their futures involve hunger, abuse, illnesses, sadness and little education. Each child should be wanted; only then will we see a child that has a chance to receive love, food, clothes, shelter and education. To try to solve this problem after this unwanted child has been born is so shortsighted, and shows how much more we have to learn. Contraceptives for all women who want them!

I am appalled that you could publish a full-page item on ice monitoring and mention satellites, but not mention either Radarsat-1 or Radarsat-2 (“Cloudy with a chance of icebergs,” Universities, Sept. 26). The two Radarsats were specifically designed and built in Canada by Canadians to monitor ice and protect our sovereignty.

Our issue published on Sept. 22 contains a profile of Maryam Monsef, the federal minister of democratic institutions. The story states that “she was born in Herat, near Afghanistan’s western border with Iran,” information that was included in her official biography. Monsef discussed her Afghan roots with Maclean’s in a wide-ranging interview on Sept. 6. But it turns out she was really born in Iran, which she revealed on Sept. 22, after being prompted by inquiries from the Globe and Mail to press her mother about her birthplace. Monsef says that in mid-September, several days before our profile went to print, she learned she wasn’t born in Afghanistan. Her office chose not to correct this key aspect of the record—despite our writer specifically asking her press secretary by phone and by email on Sept. 19 if anything had come up since our Sept. 6 interview that she thought was important to add to the story.